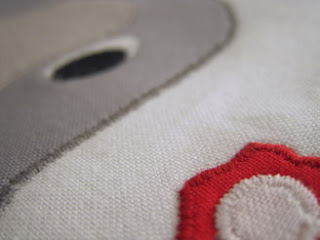 It was only when Nina very sweetly emailed to ask if all was well that I realised that I'd taken something of an unintended blog break. Time has galloped away in the way that it so often can in the run-up to Christmas. However, it's a time of year that I love and although I'm a little overwhelmed by the number of things I'm hoping to achieve in the three weeks before the Christmas school holidays begin, there's also something lovely about the cosy chaos of industry, and even the unsightly mound that begins to form on top of my wardrobe as a stash of gifts begins to stack up. 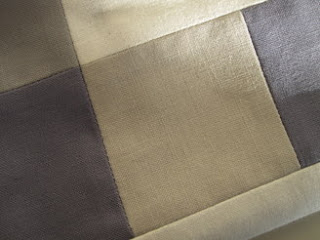 The two pictures above are part of a project that's taken up the vast majority of my time. It is a gift for one of my deliciously lovely nephews, but from the moment I dreamt it up (or half dreamt...actually I woke up one morning at 4am and spent two hours planning it out in my head) I also decided to write it up as a pattern...for that reason it's taking several times as long as it might. 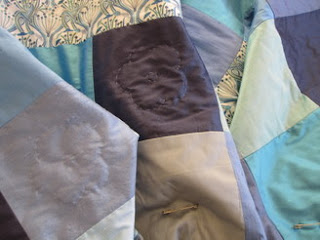 Unbelievably, for it now seems like a lifetime since I began, I am still working on my mother's silk quilt. I've been trying to fit it in around around other things and so last weekend hand-quilting the flowers took place during the visits of two different groups of lovely friends. Obviously, this way of working isn't ideal...it's only in retrospect that I can see that my stitches may not have been quite as neat as they appeared in the cosy fog of good company and a few glasses of wine. 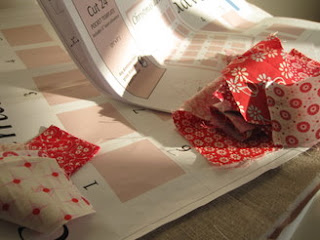 And then there is the advent calendar tutorial that I'd hoped to write after a few requests for it following my handmade calendar from last year. Even though much of the work has been done and templates and pattern pieces have all been completed, somehow I think this may be one for next year as there's little point to an advent calendar tutorial shared on the 1st December. My only hope is that I will at least manage to finish the sample calendar so that it can be used from December 1st. I'll let you know who it's for and what will go inside it if that actually happens.

I have so many things still to do and make over the next three weeks that a few days ago I even found myself looking into buying new aprons for my children, because they have outgrown the ones that I made for them and I don't think that I'm going to find the time (and by this I mean that of course the time does exist, but possibly in a way where in finding it I may also drive myself slightly loopy) to make them myself...this feels quite foreign and most unreal...how can there not be time to run up two little aprons? And then I discovered how difficult it is to find aprons for older children that are over 3ft high. Just in case you find yourself in the same predicament I found some goodies on Not on the Highstreet here and also here (they have a fantastic selection for older children with non-babyish aeroplanes, apples and elephants on). I still haven't ordered them yet as I'm finding the idea of buying something that I should really make a traumatic one...and just in case you're wondering if I couldn't have whipped a few up in the time it took me to search on the internet for them, I've just wondered that myself, but then remembered that the bulk of my searching took place at around 5am one morning. A search that was somewhat more sociable than the roar of my sewing machine springing into action for an early morning wake-up call.

On the apron front, have your children (if you have any) been utterly inspired by the Junior Bake Off? We weren't aware it was airing at the time, but we have since fallen in love with it (as well as the adorable and very accomplished winner, Freya) while watching it on iPlayer. It has set off a flurry of independent baking in our house and my children are currently devising their own in-house bake off for this weekend where parents must try and out-bake their own children and vice versa. Judging by the appearance of the scones that they rustled up earlier this week I would be a very unlikely winner (scones are my weakness: they never rise and rarely look tempting. By contrast, my children's looked golden, delicious and well-risen on their first attempt). Oh and does anyone have Mary Berry's Great British Bake Off: How to Bake

? Is it wonderful and full of baking secrets?