An apron for my daughter 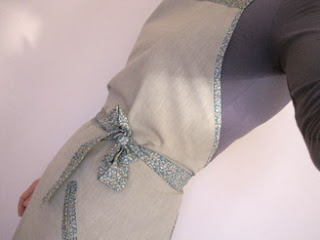 You may remember that I'd been bemoaning the lack of time to make my daughter an apron for her Christmas stocking (as she has outgrown her old one). It was an idea I'd decided to put on a shelf for another time, but then we had a conversation about bags, which wouldn't naturally make you think of making an apron, but read on, because in my head it became the only adequate response to such a conversation).

My daughter was trying on my handbag in the mirror one morning (not handmade, but rather, Radley, whose handbags I adore) when we began discussing her compulsion to try it on every time I'm not actually attached to it. I was happy about this as one of her Christmas gifts is a little bag (not Radley, as she's only ten), when she said that she loved the bags that I make myself more than anything else though and dreamt of having a miniature sized one for herself. Ouch (although yes, there's an element of delight in discovering that my child loves the bags that I make, more than those made by Radley). I had considered making her a bag, but then had bought one due to the many other gifts I've made this year and the need to sleep at some point. However, the bag-related guilt induced by this conversation, meant that it suddenly felt absolutely imperative that her apron, at least, should be handmade by me. 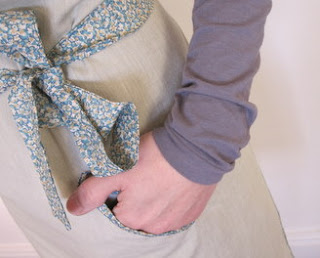 She has begun stealing my own apron when she bakes, so I knew that I only needed to scale it down a little to have a perfectly sized one. I considered making it in practical home dec. weight fabric with an intense Amy Butler pattern which would camouflage evidence of baking mishaps...but frivolity won out (not least because that morning a friend had dropped in the Liberty Home Sewing book that I'd lent to her and I remembered all over again the loveliness of an apron with splashes of Tana lawn). So here it is, to my own design & pattern: it uses some Kaffe Fasset green shot cotton, and some Liberty Tana lawn for the bindings. It has little floral-bound welt pockets at either side, a detail that I'm completely loopy about. 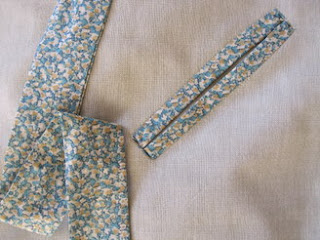 I would like to keep it for myself, which is a good indication that she will love it, as over the last year she seems to have developed very similar tastes in clothing. 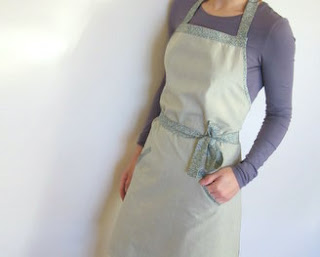 The above photo gives the appearance of my skulking by a wall....I don't recall actively skulking, but I'm quite delighted to find that it may have happened inadvertently while photographing the apron (purely because I like the word. It also appears that I am skulking in a strange top that causes me to bear a close  resemblance to a human blueberry...in reality it is a soft heathery grey). 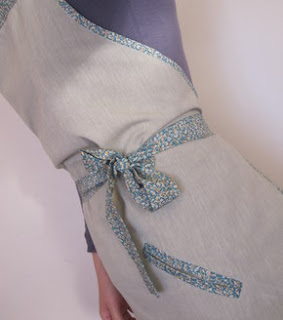 In other thoughts, I, and the rest of my family, are feeling distinctly unChristmassy. Having been spoilt by recent Christmases which have had snow to either side of the actual day, the unseasonably warm weather this year is meaning that it's difficult to adopt a festive mindset. We are at the stage when even a morning frost is being longed for. It makes me think of a Christmas from my childhood when my family lived in Melbourne, Australia and my sister and I paddled on our new stripy fabric lilos in the sea at Brighton beach in the sunshine on Christmas day. It was really lovely, but to an English person - used to dark nights and the glisten of frost at Christmas - distinctly odd and unfestive. I don't remember having a tree that year and seem to recall that the presents came from pillowcases, rather than stockings (I'm guessing that this had something to do with us having recently moved there, as I'm sure that Australia celebrates Christmas with just as much enthusiasm as anywhere else might). What kind of weather do you associate with Christmas...and do you think that it does colour your festive spirit?