Cushion-making & a board game guide 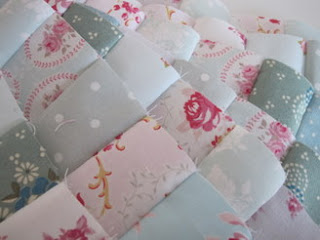 Last Friday I started making a cushion for my grandmother who I'll be seeing on Christmas day. I chose tiny floral prints that, to me, feel wintry and snow-speckled, but that I'm hoping will look fresh and spring-like later in the year: I'm full of changeling perceptions and I'm hoping she will be too. The darker turquoise print that you can see is part of Denyse Schmidt's Hope Valley collection and is one of my favourites and a print that I'm hoping gives this collection of colours a bit of umph...as I fear that without it they could be rather wishy-washy. 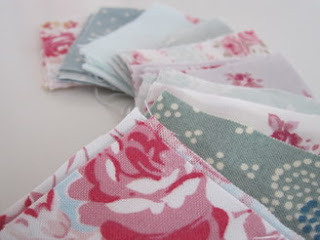 Friday was one of those days when I loved the different processes of everything I was doing and revelled in the fiddliness of the tiny pieces from cutting them out, to piecing them together, snipping the loose threads away and pressing the seams. Notable, because some days I just feel frustrated by these things and race through them burning my fingers on the iron as I go: pressing the seams open on 2" squares has ample digit-burning potential in the wrong frame of mind! 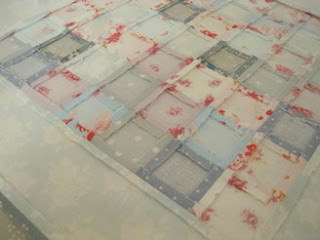 Unfortunately, the light had gone by the time this last photograph was taken, hence the rather hideous colours. I've always pressed seams to the side in the past, but pressing them open has been something of a revelation. It seems to give a neater finish and, once sewn seams have begun intersecting one another, also makes a smaller task of unpicking a small area to realign things. And yes, it makes me post photos of things from the back instead of the front (those are photos for another post, as I haven't got around to photographing the finished cushion yet).

Which leads me to board games (yes, something of a non sequitur to cushion making). In the winter we tend to play a huge amount of them and I'm always on the look out for new suggestions. I thought I'd put together a list of some of our own favourites, just in case, like me, you're trying to winkle out some new ones to play over Christmas.

and is made by the wonderful Haba company. The playing pieces are small, coloured wooden pieces of fruit, dispensed from tiny wicker baskets. It's a wonderful game for colour recognition and counting and, because you work as a team against the crow, there's none of the tension associated with other games if you're playing with a very young child who is prone to nose-planting their face into the carpet and howling if they lose. We played it often until our youngest child was about 6. It feels like a very special heirloom quality game and it's now been safely packed away into the loft to be brought out if and when we have grandchildren. A miniature, more inexpensive version is now available too, but as an indulgent gift, the larger set is will be very much treasured.

, a game where you take on the role of a postmaster or mistress and race your way around a 3D island delivering letters and parcels. At first the rules seemed very complicated, but they're worth persevering with as once you've learnt them it's a wonderful game and is loved by everyone in our family. It's recommended for age 6+, but we've played it from about 4+ and it's only recently that it's started to feel as though they've outgrown it.

The game that I remember playing with my own father, right through childhood and the sulky teenage years, is Othello

. It's a wonderfully simple game, but one which, with age, can be played with increasing levels of strategy and planning, thinking several moves ahead. We have our own set now and our children love the black and white shiny counters, which somehow make me think of after dinner mints, as much as I did at their age. Unfortunately my husband won't play this game with me, as my years of training have made me unbeatable and I tend to take on my father's highly-competitive and high-spirited persona when I play against him.

Our most recent board game purchase is Harry Potter Cluedo

. We bought this in September for my daughter's birthday and the fact that we are now photocopying clue sheets, having worked our way through those that came with it, I'm guessing that we must have played this nearly fifty times. It's played in the same way as the traditional Cluedo

, but has been fully Potterised in a way that works wonderfully. Players apparate through fireplaces to get to different locations, paying to do so with pinches of flue powder and a whole host of other Pottery details have been added in to the way that the game is played.

For times when I'd really rather curl up with a book and have some peace and quiet, I suggest playing the traditional Chinese Checkers.

We all seem to get caught up in our own strategy during this game and the room becomes an oasis of calm. Perfect. In the same vein, several years ago, my sister bought my daughter Mice and Cheese Peg Solitaire

. It's the perfect game to play alone, but we frequently play together too by taking it in turns to eliminate a mouse. It's the most adorable set and I believe there are other animals available too.

By contrast, noisier games that we love are Don't Say It

, which I believe may be similar to Articulate (does anyone have both and know which is better? And is the adult version of Articulate playable for children?)

Every Christmas Eve, I give my family a pre-Christmas gift - a small something that the three of them can share. This year, on Nancy's recommendation, I'll be giving them the award winning game Carcassonne

. I'd love to hear what your own favourites are.