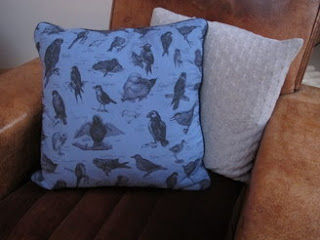 This cushion should have been a pair of boxer shorts. I'd bought the fabric from Liberty months ago when the Edwyn Collins Ornithology line first appeared - I fell in love with the china blue background, the stunning bird sketches and the story behind the fabric. In December I bought Kwik Sew 1672 as I had too little time to draft my own pattern. The envelope showed the kind of fit I was imagining might make for a good pair of cotton boxer shorts, but when I came to cut out my fabric I discovered that boxer shorts require more fabric than I'd envisaged. A short is not a mere slip of a garment, but more a hungry, fabric gobbling item that rendered me lacking a rather vital 1.5" of fabric...so near, yet so very far from pant production. My husband was able to console me when he glanced at the pattern envelope: was it really safe to transform my dear Papa into something akin to the image on the packet? 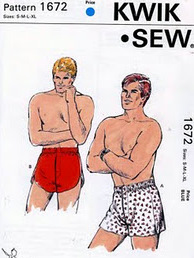 Perhaps not. And so my father unexpectedly became the recipient of a cushion, rather than the long-planned boxer shorts. 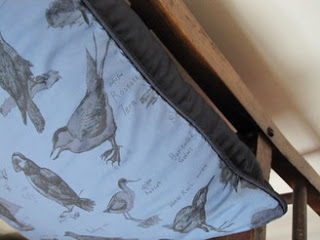 I made piping to border the cushion edge. 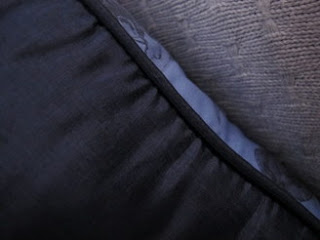 And for the cushion back I used my favourite midnight blue Venezia fabric that I have been hoarding greedily because I love it so much. 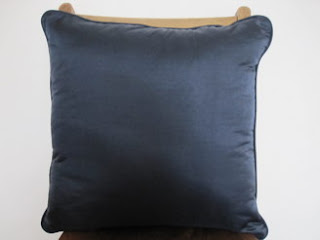 To leave two of my most favourite fabrics uninterrupted on both sides an invisible zip in one of the seams was called for. I've never installed an invisible zipper in the same seam as piping before...it wasn't an installation entirely without error, but it was,at least, easier than I'd anticipated it might be.

I gave my father a little sheet detailing the story behind the bird sketches and a copy of Edwyn Collins' biography, Falling and Laughing: The Restoration of Edwyn Collins

, which I'm planning to borrow back after he's read it. In case you didn't read about it at the time, here's a little background for you. You may remember Edwyn Collins from the 90s - he had a hit single with 'Never Met a Girl Like you Before'. Seven years ago, still a young man, he suffered a series of strokes which left him with brain damage; unable to feed himself, walk, talk, read or write, and paralysed down one side. He was forced to relearn all these tasks with the added complication of having to master holding a pencil in his left hand, having been right-handed all his life. As part of his later rehabilitation he drew a sketch of a bird each day: it's these sketches that feature in his Ornithology fabric prints for the Liberty Rocks collection.  That story leaves me completely moved, particularly when you consider how incredibly beautiful the fabric is in its own right. I think my father thought so too.
Florence x
Email Post