The 'What I Wish I'd Known' skirt 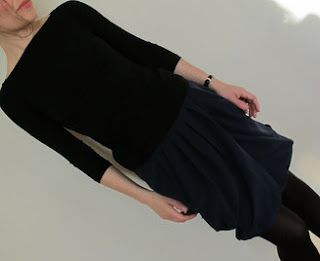 Last week I started work on this skirt by McCalls  (pattern number: M6439) after happening upon it by chance and deciding that I needed one immediately. I love how the pleats come in from every angle to give it a slightly sculptural feel - it feels like a grown-up bubble skirt.

As you may know, I loathe working from envelope patterns, finding it preferable to use a Japanese pattern where in three simple, wordless diagrams everything that one needs to know in order to be able to construct the garment is conveyed. By contrast, it feels as though envelope patterns spend two sides of A3 using the smallest font available trying to wilfully mislead me. The one redeeming feature of this skirt pattern was that it wasn't produced by Simplicity: a name which I always find particularly galling when struggling through their instructions. 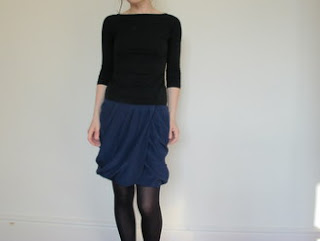 Anyway, the actual pattern pieces are beautifully cut and produce a skirt that's really lovely, even if the instructions are the things of nightmares. Knowing that envelope patterns always seem to run very large, I ignored the measurement chart and chose the smallest size, however, the waistband was still several inches too big. Bodies are so different that one expects that a certain amount of jiggery-pokery may be needed to get the fit of a garment just right (and sometimes even accept that a particular pattern will just never fit and flatter one's particular body in the way that one might hope). However, a skirt waistband intended to sit on the waist feels as though it should be the least ambiguous of fitting issues. The smallest size on the McCalls pattern chart is intended to fit someone with a 23.5" waist (remember I'd picked the smallest size because I know envelope patterns run large...my waist is actually a little bigger than that) but I then had to take a further 3 inches out of the of the skirt to get it to fit...which would mean that theoretically I should have a 20.5" waist. An internet search revealed that the need to remove several inches is common with this skirt...if only I'd thought to look first. 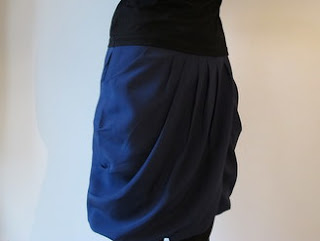 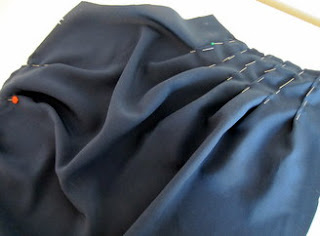 Because this skirt is made from two overlapping front pieces of heavily sculpted material, it was almost impossible to assess fit until right near the end of making the pattern up - by which point the excess material could only be taken from the central back seam of the skirt, as the front pieces have pleats to each side as well as along the top. Taking all the excess from the back obviously produces front and back pieces of unequal widths, which is why the skirt looks like this from the back (see below). Had I altered the pattern pieces prior to making it, I'm sure you wouldn't be able to see the bulk of the pleats to either side when looking at the skirt from behind. It distorts the silhouette and makes me feel self-conscious about how inexpertly made the skirt is. Arg! 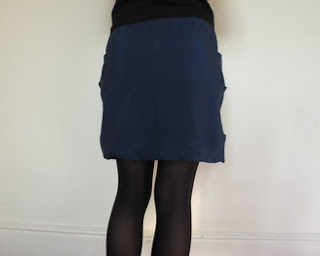 It's a pattern for which a toile is almost essential, which is why I feel so annoyed with myself that in my enthusiasm I decided to dispense with that and instead chose to cut straight into some very expensive silk crepe. In theory, making your own clothes meant to be the thriftier, more environmentally-friendly option, but I think this only holds true for seamstresses who aren't spirited away on flights of fancy that this-one-will-probably-be-fit-first-time leading them to foolishly delve straight into the drawer mentally marked 'very special fabrics'. 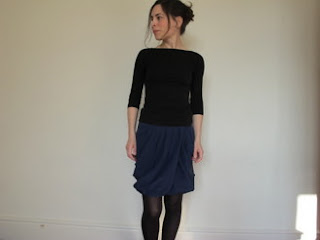 I've decided to share this skirt with you anyway though, because I really think it's a super pattern if you're forearmed with some knowledge that the sizing is completely off and will most definitely require a toile. If, like me, you find the idea of matching up over a dozen pleat points intensely satisfying you will love making this skirt. For those tempted, I'd also make the following changes if I were to make it again: I'd put the concealed zip in the side seam rather than at the back to give a smoother, less secretarial look and cut the back panel as one piece; once I'd created the many pleats, I'd throw the instructions away and install a self-drafted waistband as the instructions in this area are particularly dire for what should be a very simple sewing task; I'd know that the skirt is fully lined, so there's no need to spend time on any special seam finishes; the skirt worked well in a silk crepe with a really good drape - I'm unsure how successful it would have been in a less fluid material; I woudn't buy the downloadable PDF version as that involves sticking 61 pages of A4 paper together: it will make you want to cry. It will also make you want to abandon the sellotape nightmare by page 26 and buy a hard copy from a shop instead. Double environmental and thrifty fail! Damn.

ps. I've just discovered that McCalls obviously thought it looked better without the zip inserted centrally at the back too...it's either been airbrushed away or they gave up following their own instructions too.
Email Post