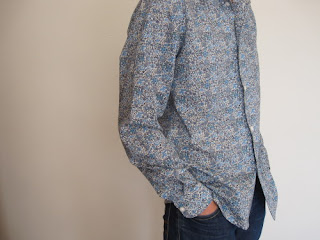 If it feels like I've been mentioning the second Negroni shirt I've been working on for my husband for a very long time that would be because I have. It's not a pattern to rush through - partly because precision is fairly critical to this pattern and partly because it's a sewing pattern worth savouring because the construction process is so enjoyable. Unusually for me (because I tend to work very frenetically), I made this shirt in bite-sized pieces: an hour here, an hour there; stopping at 9.30pm, rather than 1am. Will you finish it soon? he would ask, whenever he saw his shirt fabric out on the machine. Not today, I would say. It was a surprise to both of us that I am capable of working a mañana attitude: this is a new thing. 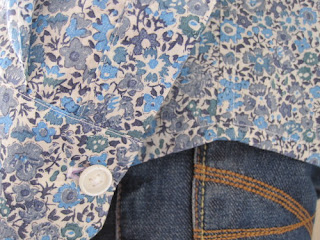 The fabric is a Liberty Tawn lawn of dusty blue flowers that give the print a naturally faded, relaxed look. 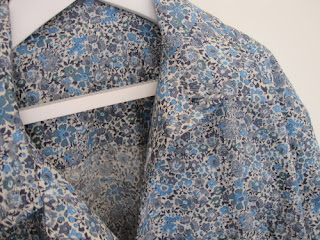 When I'd first started planning this shirt in my head, I'd thought of doing clever contrasty things with the facings, the pocket and cuffs, but in the end I reined myself in as I knew I'd just be doing them for my own sewing delight, rather than because it would add anything to the shirt - I think this print actually looks better as it is, unadulterated. 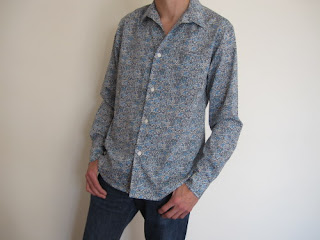 The only blip with making the shirt came with my choice of fabric marker. On the evening I cut the pattern out I found that my beloved Frixion pens had all dried up and so I reverted to a chalk pen which by contrast felt chunky and impresise. There are so many pattern markings on this shirt that I became increasingly worried about how it would come together with these inaccurate chalky splodges...and so I rushed out first thing the following morning and bought more Frixion pens and fell in love with them all over again.
I know that Frixion pens divide seamstresses. Some of you love them, others have written to me (quite angrily) telling me that when you put your quilt in the freezer to test whether the lines have really disappeared after ironing them away, the lines have in fact reappeared and were only pretending they'd gone away. It delighted me to think as I made this shirt that if my husband was ever particularly wicked and I felt compelled to try and force him into the freezer as punishment, folding his long arms up to fit into the drawers, I would have to sit grumpily on the other side of the door knowing that the markings on his shirt would be gradually reappearing as he froze. It's a double-edge sword sort of punishment: it would hurt me as much as it would hurt him. Happily, my husband's wickedness levels never rise too far above making me feel a bit foot-stampy, so I still feel fairly confident that the Frixion pens are a very good thing (note: as the lines disappear with heat, you have to be careful to keep the iron well away from your markings as you press a seam, until you're actually ready to say goodbye to them, but if all else fails, we now know that you can revive them by putting the fabric in the freezer!). 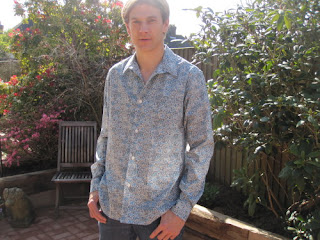 And here's the man himself, appreciating a moment of warmth in the sun. Ahem. (In the background you can see a tiny snippet of part of the new garden that he's been working on since December 27th of last year - I can't wait to show you the transformation once he's done the final task of laying a lawn. 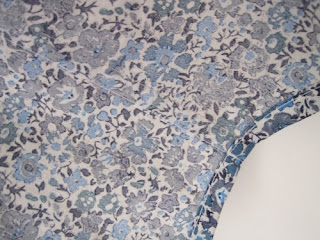 As ever, with the negroni, the inside finish is just lovely - the pattern instructs upon flat-felled seams throughout which means that you're left without the conundrum of how best to finish your seams neatly. As I think I've conveyed before on numerous occassions, the Negroni is my idea of sewing pattern Manna.  I am already considering the next one. If you're thinking of buying the pattern yourself, you can find it in the Colette Patterns shop overseas, or English seamstresses can find it at Backstitch, as well as a great many other lovely places.

Ps. If you want to see the first Negroni that I made in a plainer fabric, then you can find it here.
Email Post