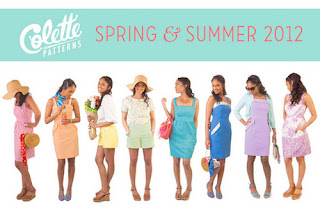 Last week Sarai emailed me with a sneak preview of this season's lovely new additions to the Colette Patterns range. You can find full details about all the patterns over on the Coletterie and via the online shop, however, I'd love to share my thoughts on the new patterns and if you'd like to leave a comment at the end of this post, you have the chance to win a copy of one of them.

Let's start with Iris. I was delighted to find included in the new range a pattern for a pair of shorts with just the kind of sailor-front detailing that I'd been searching for last summer, but was unable to find. It's a style that, for me, has a timeless appeal but with roots firmly set in 1950s starlet territory. 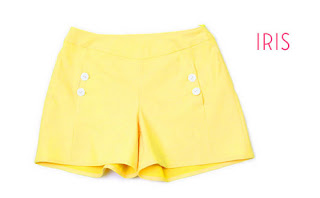 The clever thing about the Iris pattern, is that when the pocket placement is teamed with buttons it gives the illusion of a true sailor front, but simply omitting the buttons leaves you with an altogether more contemporary look.
I have to admit to being wary of shorts. I don't think I've worn a pair since I was a teenager, due to self-consciousness over my very English pale legs (although that could change a little as we're heading off to the Italian Lakes this summer, which will be our first no-snow holiday abroad for over 15 years - hurrah!). However, lengthening the leg on these would transform them into a garment within my comfort zone and really wouldn't be hard to do, so they're high on my wish list of summer sewing.
The other patterns are both sundresses. Above is Hazel. I love the style lines of this dress: the fitted bodice and the not-too-full skirt, as well as the tiny horizontal bust darts which interrupt the central panel. Colette have produced two versions of this dress to illustrate the pattern: one striped, which shows off the many details to full effect with cleverly placed stripes intersecting one another from different angles; while another uses a floral Nani Iro gauze which loses many of these details in the print of the fabric, transforming it into a different dress altogether. The bodice side panels are bias cut, which means it's likely to be very flattering - hurrah! I'm really looking forward to seeing how others make this dress up - the first thing that springs to my mind is a navy broderie anglaise, possibly with some narrow piping inserted in the diagonal style lines to make them stand out, but I think I may stalk the Colette Flickr pools for inspiration before committing to anything.


And finally, the gorgeous, Sophia Loren-inspired, Lily sundress. Where Hazel looks softly feminine with its gathered waist and floral motif suggestion, Lily is much more Mad Men style, with its clean fitted lines it looks to be wonderfully curve hugging - I'm hoping this will prove to be a dress version of the Beignet skirt. The pocket detail and band that runs across the bodice top give fantastic potential for playing with accent colours too. I'm excited about this dress even though, oddly, it was the one that initially I was least taken with, it's somehow become the one that I think I'd like to try first. It just looks so elegant and chic.
You may be excited to hear that this is the first range of patterns that Colette are producing as PDF downloads (although the traditional paper copies are still very much available). If you'd like to win a PDF printable copy of one of these patterns, just leave a comment letting me know which pattern you'd like to win (Iris, Hazel or Lily) and I'll pick a random winner and pass your details over to Sarai and Caitlin for electronic dispatch. I'd love to hear what you think of the patterns, which fabrics you can imagine using or what you're working on at the moment. 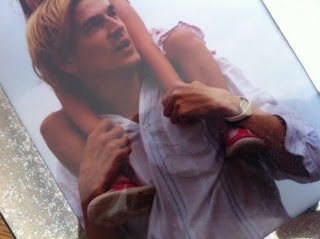 Fittingly, I am now returning to work on the Colette Patterns' Negroni shirt for my husband that I mentioned in my last post. I am but two sleeves and several buttons away from being finished.  I'm wondering how easy it would be for Negroni number III* (because there definitely will be one: I think this is the pattern I most enjoying sewing in the entire world) to convert the front into a Grandad style opening, as per the shirt above. This is a photo I took of my husband at the beach several years ago (those are my daughter's legs dangling around his ears). The shirt has long-since left his wardrobe as it was a deliciously light-weight summer cotton that became quickly tattered. However, I love the style of the mandarin collar, button placket which ends mid-chest and slightly looser sleeves....it somehow feels wonderfully weekendy. However, they actually amount to a fairly substantial number of changes, no? I think it may be a whole separate pattern. I may put in an official pattern request plea to Colette Patterns.
Florence x
*Although I'm not sure that my husband deserves to be the recipient of any more shirts or for me to be making pattern requests on his behalf - he has just told me that when he has his end of year review (he's self-employed) he's going to ask if can sit at a desk near someone who's more fun than me due to my being an unenthusiastic player in his impromptu game of 'guess what this song from the 80's is' this morning. He says that I need to learn how to behave in an office and that I must engage in banter as well as thinking about sewing. I think I may need to go on a course to learn how to do that: it sounds hard.
Email Post