The way I work 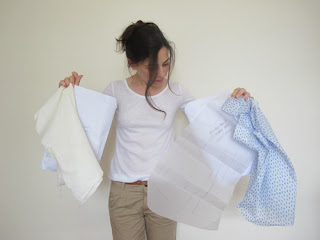 Pattern storage is becoming an increasing problem and I'm wondering how others without limitless cupboard space deal with it. When I'm drafting a pattern myself, I tend to keep every element of the pattern's development and each toile made, to keep my options open should I decide to backtrack and restart the process from two steps earlier. Each new version of a pattern draft gets its own A4 envelope where imaginative names such as 'princess seams top, version 4' or 'top with the pintucked yokey bit, version 3' is scrawled on the front and the pattern pieces and any relevant toiles are folded inside. The envelopes are than placed in a drawer that is now so full that each time I open and close it more patterns fall away down the back and the entire drawer has to be removed to retrieve them. 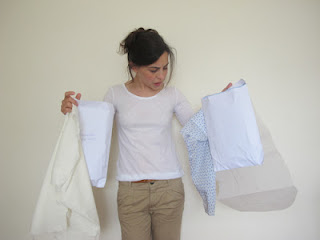 When I've finally settled on a pattern (this seems to rarely happen), I rename it in a way that I think will help me know which pattern pieces they are in a year's time - such as naming it after the first proper fabric which the garment was successfully made up in, or the first place to which I wore it. So this top was called 'Citrus voile top' and this top, which was slightly more voluminous than the versions that had gone before it was named 'Rye top'. In an ideal world where I was thoroughly organised, I'd take a photo of the finished top and stick it on the front, but the world is yet to become ideal. I'd also think up better names which made me momentarily feel like a hipster when I opened my drawers, rather than someone with the most chaotic, idiosyncratic filing system in the world.
When each finished garment (or abandoned garment - there are many of those too) may be the result of three toiles and four or five envelopes of pattern pieces I can see that I'm heading toward some kind of horrible implosion in terms of storage methods, space and naming strategies.
How do you organise your patterns and toiles - self-drafted or shops-bought - I'd love to know.
Florence x
Email Post