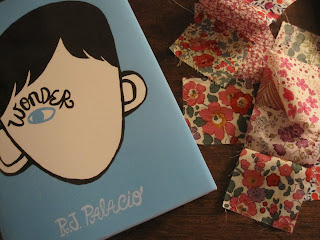 A few weeks ago I came across Wonder

and bought a copy for my husband to read to us. We often have a book each that we read to our children. I especially love when he reads though, as it means I can sew whilst listening. In the years since my own mother read to me and my sister, as I hung upside down for hours over the arm of the sofa with my head pressed against the floor, I'd forgotten quite what a treat it is to be read aloud to, but now it's a part of my life that I think I'll miss dreadfully if it wanes as my children grow up.

The reviews of this book are sensational, but not in a way where there's so much hype that it put me off reading it (such a thing made me foolishly avoid Harry Potter for nearly a decade before discovering that I did enjoy it after all). I felt almost sure that we'd love it. And we did. It's one of those books that's half-children's book, half adults' book: the wisdom and warmth it has to offer spans generations and are appreciated and thought over on different levels. ﻿ 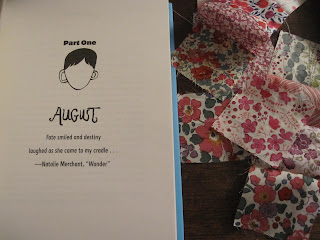 It's about a little boy called August with an horrific facial disfigurement and is narrated in short chapters by him and the people around him: those who adore him and look on with apprehension and wonder as he joins a mainstream school for the first time aged 10; and those who fear him and his unusual face and worry that his looks may somehow infect them merely by brushing their hand against his. It is a book that shatters preconceptions in the same way that Mark Haddon's The Curious Incident of the Dog in the Night-time

did several years earlier, but it's a more joyful, heartwarming book than that. As my husband read aloud, all four of us found that we frequently had tears rolling down our cheeks, but it was invariably uplifting and inspiring in greater measures than it was saddening, with a cast of characters who were endearingly human and (mostly) hugely likable. 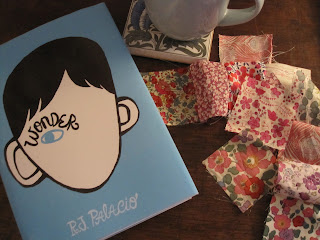 Our children are eight and ten and it's a book that at times is narrated by teenage characters, meaning that very occasionally the subject matter or language needed to be edited by my husband as he read, but in most ways, I can't think of a more suitable or appropriate book to read to children. It teaches the value of kindness more succinctly, unpreachingly and generously than any other book I've come across and the words of August's wonderful headmaster, who draws on the quote that 'one should always be kinder than is necessary', have rumbled around my head ever since my husband finished reading the last line of the book. Yes, it's a book about disfigurement, but in many ways, it's primarily an exploration of human nature and, largely, the good in human nature.

Whether you have children or not, I implore you to read this lovely book: it is a simple novel, full of complex, wonderful characters. You may want to sew up a tissue holder beforehand though.

Ps. I no longer hang upside down when I'm read to as it would make sewing too problematic.