In anticipation of the summer holidays 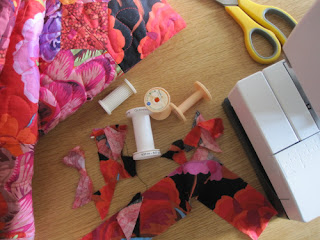 When I came downstairs rather bleary-eyed very early on Sunday morning, I had the sensation that one might have on walking into the kitchen the morning after a particularly good party: an array of unwashed wine glasses and empty bottles littering every surface, the memories of late night antics washing over your senses: happiness, tinged with an exhausted feeling of knowing you should have stopped drinking a few hours earlier than you actually did. Except this Sunday morning, scraps of fabric replaced the half-drained glasses and spent cotton reels took the place of wine bottles. 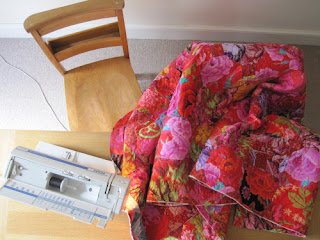 On Saturday I had brought my sewing machine downstairs to the dining room table which is far bigger than my work desk and so better for accommodating a large, unwieldy quilt sandwich. Throughout the day we did different things - in the morning, I dashed into town to post the fabric parcels I'd sold in my pop-up fabric shop (a few items are still left if you're interested) and went and bought the fabric needed for a present I'm working on for a friend; when my children had their friends over to play in the morning, I basted the Charlotte Bartlett quilt on the floor of my son's bedroom; after lunch when we went to a reading that my daughter was involved in I packed my English paper piecing into my bag so that I could stitch if we had to wait around; as my husband made dinner I cut out the pieces needed for making another pair of Clover trousers; when we watched Mr Bean Goes On Holiday in the evening with the children I pieced together the last few pieces of patchwork needed for a cushion I was working on; and in the evening I free-motion quilted the Charlotte Bartlett quilt late into the night (if you're wondering why it's called the Charlotte Bartlett quilt, you can find an explanation in this post). 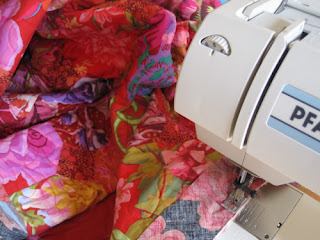 On Sunday I woke up at the crack of dawn and crept back downstairs to bind the Charlotte Bartlett quilt; quilt the paper-pieced cushion cover and turn it into a cushion; and begin drawing out a quilt design.

The reason for this frenetic level of activity? The summer holidays are a week away. Every year at this time I begin to feel a little panic-stricken. I feel that sewing time is running out and a list begins to form in my head of things I must have done before my children are home for the summer. Several years ago, when I ran my little shop, I felt torn when I took on too many custom orders and needed to work every day until lunch, leaving my children to amuse themselves - they didn't seem to mind, but I felt pained by it all the same. Since then, I've determined never to repeat the guilt-inducing experience and I always try to begin the holidays with little or nothing left to do, other than the agreed hour each morning in which I write a blog post, answer emails or do anything else needed (or wanted...sometimes they can feel like the same thing, such is the power of wish to sew). What follows tends to be a much more organic series of things made that fits in around what we're doing. I still have the evenings in which to sew, as well as the unplanned times when they have friends over, go out to clubs, or simply don't actually want or need me to be around, but these unplanned times feel slightly pressured because of their fleetingness. I'm hoping that this year, with the more portable and sociable activity of English paper piecing to keep me occupied, it will feel like less of a balancing act.

Before my children started school I often used to stay up sewing until past midnight and bounce out of bed happily the next morning...this doesn't seem such a good option now. After two years of doing that I lost my propensity for morning bounce and it's never returned: now I just feel groggy and awful if I do that and like I've been to the aforementioned party.

On Saturday night I said on Twitter that the empty cotton reels indicated I had sewn over 1500 metres. I realised later that this was warped logic as half of that thread would have been used in the bobbin, so in reality the distance covered was a mere 750 metres (as Kerry amusingly said: I would have had to have been sewing 'like a mentalist' to have gone that far). But actually, by the end of the weekend I think I had passed the 1000 mark and, once again, I felt the inexplicable desire to have a mileometer on my sewing machine - there's something satisfying about knowing how far you've sewn. I like to imagine the places I could have stitched my way to: to the end of my road, to the seaside, or 'oh look, it's taken two years but I'm finally in Paris!' Just think of the fun that could be had.