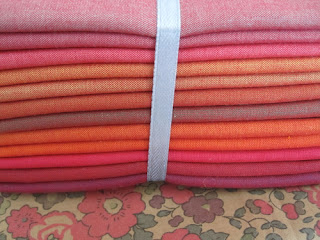 This weekend I went up to Birmingham NEC to explore the Festival of Quilts. It's reputedly the largest quilt festival in Europe and is an equal mix of quilt related exhibition and shopping. For me, it's both expensive and time-consuming to get to, but having been once I can now see that it will almost certainly become an annual treat for me.
It's rare to return home from a day that involves nearly seven hours of commuting feeling invigorated, but somehow I did. I'm desperate to show you photographs of the quilts entries being exhibited, but as they were being judged the maker's names weren't shown and it doesn't feel right to post uncredited pictures. But it was delicious. The quilts were a sea of different textures, colours, patterns and sizes, meaning that the eyes and brain were constantly buzzing, unable to become weary from looking at row upon row of quilts. I especially loved the ones made of tiny, intricate pieces; the reproductions of quilts first made hundreds of years ago; and those that used a variety of fabrics to produce a tactile work that made you desperate to touch it. It's odd how instinctive is the need to touch, rather than merely look at, a quilt, but I satisfied my hungry fingers by pointing a camera at them instead.
One of the highlights of the festival for me was seeing Brigitte Morgenroth's quilts, which were breathtakingly lovely. Now in her late seventies, Brigitte has amassed an inspiring body of work, created predominately in silk and satin, fabrics which have an iridescence and playfulness which softens her geometric, structured use of colour and shape, resulting in my idea of quilty perfection. 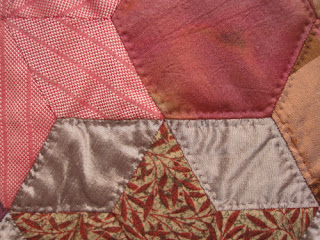 Exhibition aside, the list of stands at the festival was fantastic. My absolute highlight being the Quilt Mania stand, publisher of the eponymously named magazine and a select collection of quilting books produced in both French and English.
I have lost countless hours to their website pondering over which books to buy and get shipped over from France, so to be able to flick through them in person, meet their lovely and enthusiastic publishers and leaf through the magazines was wonderful. I showed much restraint and purchased two books and three magazines, but the wishlist is long. The books are so utterly wonderful (I stayed up for much of the night studying them as I couldn't sleep) that they merit a post of their own, so I won't discuss them further here. 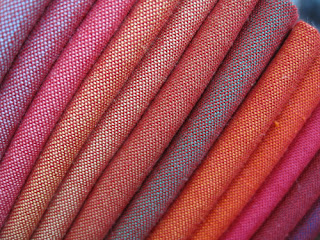 As well as Quilt Mania (in truth, they could have been the only stallholder and my day would have been complete) I had also been keen to see the much talked of Oakshott fabrics which are shot with different colours on the warp and weft. Their standard shot cotton is very similar to Kaffe Fassett's plain shot cottons, although perhaps with more body and a little more of a sheen (Kaffe's feel very soft and unstructured). They had a beautiful pastel set that it occurred to me afterwards would look amazing interspersed with soft Liberty print fabrics, but I chose a bundle from their range of more iridescent fabrics named Ruby Red, each colour shot with the same ruby red warp. 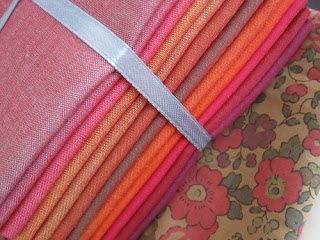 I have several ideas for them and I may combine some with this beautiful Liberty print which I picked out to match them. I had been wondering whether the Oakshott range of rubies was prone to fray as it is so similar in appearance to silk, but the Oakshott people assured me not. I'll let you know how I find them, as I've heard others say they are prone to fray and it's nice to know what to anticipate (on both of these instances of making silk quilts I found that either using a light iron-on interfacing or cutting them with a pinking blade in my rotary cutter solved any issue of fray).
I had also been keen to try out some Aurifil thread. Unfortunately the Aurifil stand was only selling it in large collection boxes, which seems like rather an investment if you're not convinced that the thread is superior in any other way than that it's fronted by Alex Veronelli, whose Twitter posts are so frequently amusing that his threads stick in your mind (the fact that he recently shared with his followers that an automatic toilet had flushed before he'd finished using it may have meant that I was smirking slightly when I spoke to him). However, I eventually found a single reel of Aurifil at Cotton Patch's stand. I'd also invested in some of Clover's popular Black/Gold needles too, so when I arrived home last night I decided to first try out the needles with my usual thread and then the Aurifil while I was doing some paper piecing, so that I could see where any marked difference may be coming from. Perhaps it's because you quickly become used to the needles that you regularly sew with, but the black/golds were no discernibly better than my usual Clover needles and felt as though they were dragging slightly. Mmmm. However, when I switched over to the Aurifil thread I was immediately impressed. When I'd asked Claire that morning about what it was that made Aurifil different from other threads she'd said: it just feels really nice when you're hand-sewing with it. She'd had a dreamy expression on her face when she said it. I was left wanting more. How was it nice? My own answer now, is that it just is (typed with dreamy facial expression) and I'm not sure why. It goes through the fabric easily and feels sort of buttery, a bit like Anna Maria Horner's voile slipping through your fingers. That sounds like a pervy thread moment though, so I'll stop there. 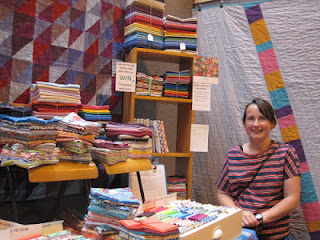 Next, meet Alice, of Backstitch - I was delighted to finally do so. Her stand looked beautiful and within the context of the festival felt completely unique - it was the only stand I saw selling some of the more contemporary ranges, such as Cloud 9's Simpatico. She also showed me the rainbow of linen which she's now stocking after I'd admired her quilt of purples, reds and blues that you can see to the left of the photo on the wall. It's beautiful and gives a completely different, heavier feel to a quilt. As a teenager I had a very amusing boyfriend who once, upon seeing my mother wearing a linen dress, cheekily remarked: Oh Mrs B! Delightful. Linen: so cool on your skin in the summer and providing of so much warmth in the winter. I thought of his observations when I saw Alice's quilt...it sounds like its properties may be excellent for blanketry as well as clothing.
Finally, I was given a copy of The Quilter by the Quilters' Guild of the British Isles just as I was leaving. I was already aware of them as I've recently been stalking the online collection archives of their Quilt Museum and Gallery based in York (they have some amazing quilts, which I'd love to go and see at some point). I read their magazine on the train home. It looked rather dry, but it was full of well-written, interesting articles by people with a genuine love and enthusiasm for quilting and all that surrounds it. Both by the Guild and several times at the festival it was expressed how lovely it was to see 'a young person' interested in quilting and what a worry it was for older quilters keen to keep alive the skills and knowledge they're so keen to pass on. This surprised me. Firstly, to be described as 'young': within the bubble of the internet, it seems as though quilting is an interest beloved and very much embraced both by my generation and the subsequent one. Secondly, because sewing is currently undergoing such a revival, it always amazes me that anyone would worry over its health. However, in the context of the festival, I did feel like one of the younger ones and it made me wonder if my impression of the average age of the quilting population is skewed. In the 1990s Barbara Bailey (a Guild member) left her estate to the Guild and over a decade later, the collection they had amassed was moved to a permanent home in York where it could be viewed by visitors. However, visitor predictions fell far short of their expectations and the Guild recently faced the idea of giving up the premises due to the shortfall in income (it's since been given three years' respite). I was surprised to read this - looking at their collection online it's an impressive one that would merit my hurling myself north again had I not spent all my money at the quilt festival. What do you think?
Florence x
Email Post