Finally: a sundress and some sun 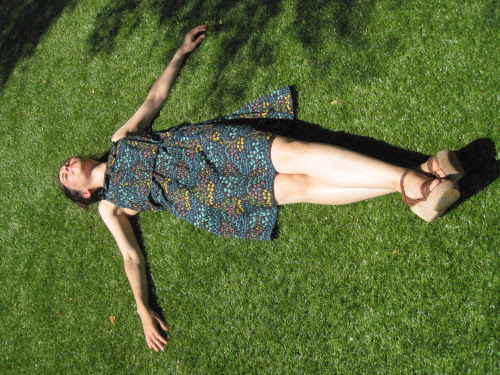 This photo was taken just before we went away to Italy. I am now exactly one shade browner than the delectable shade of Wimborne White (shade 239 on the Farrow and Ball paint chart) which is my usual year-round skin colour seen in evidence here. You may remember that a few months ago I interviewed my lovely and very talented online-friend, Christine Haynes, about her new sewing patterns. When Christine was passing through Japan on her way to Paris for the summer, she chose some fabric for me and sent it along with the patterns when they were released last month. It was an unexpected and completely delightful package to unwrap and I was incredibly touched that she'd though of me when she was on her holidays (I did very nearly jump on the Eurostar to meet her in person but two small children who needed collecting from school prevented me. Perhaps next year). 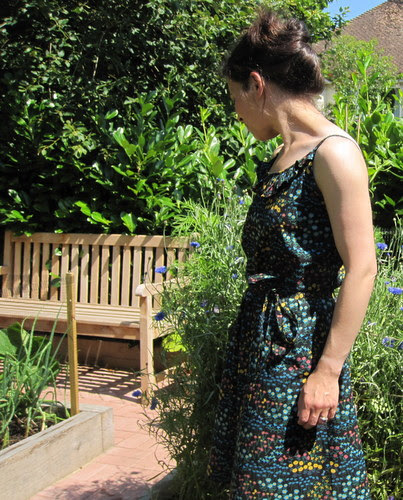 Once the parcel arrived it began to rain relentlessly and I dispiritedly wondered if I would have to wait until next year to make a sundress (just as I'm not capable of buying summer clothing on a rainy day, I'm not capable of sewing it in those conditions either). However, in a brief moment of respite, when the sun shone for approximately four and a half hours, I broke open one of the patterns and set to work making the Derby dress. 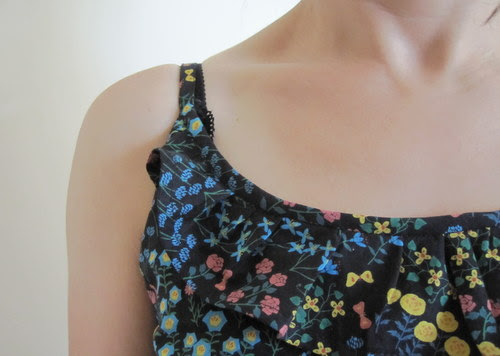 My measurements were all over the place on the back of the envelope and while my top half fitted a size 0, my waist was a size 2 and my hips a size 4, bringing to mind a vision of a human triangle (the pattern's measurements aren't odd by the way - my bottom half is just bigger than my top half). However, Christine advised me to follow my chest size and make the size 0 as she told me that the dress has lots of volume in the lower half. It was excellent advice as it's an absolutely perfect fit across the bust. 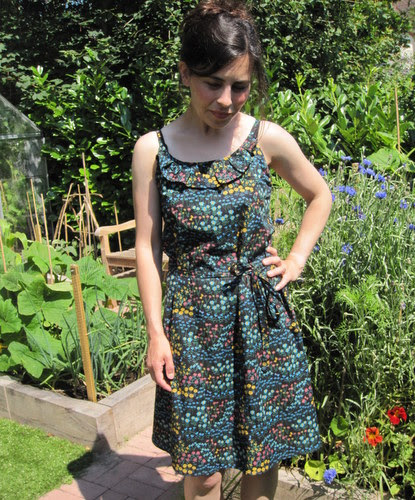 Before I began I felt slightly trepidacious about how I would make any changes to something with princess seams both front and back, but actually, it's incredibly easy to slice a little bit off each of the eight vertical seams which give the dress its fantastic swingy shape to achieve just the fit you're hoping for. I ended up shaving over six inches off the skirt seams as I didn't want the dress to be quite so full (as I'm only 5ft1). The shape was a complete surprise and the photos don't quite convey just how swingy this dress is - it's what I think of as a trapeze dress and it was a complete delight to see the shape unfold as I sewed the many panels of the dress together. Even with several inches of fullness removed it has retained the essence of this and it's lovely. 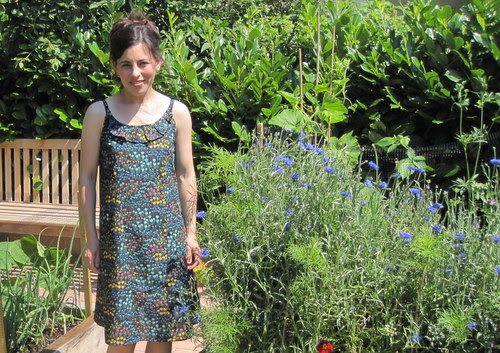 For those not familiar with princess seams as anything more than a visual line within an piece of clothing: a brief explanation. Unless a garment is loose-fitting or cut to flatter a more gamine figure, you'll often find a dart coming from the side seams to make a garment fit the bust and curves nicely. A princess seams, however, are vertical seams running down the front of the garment (and in this case the back too) and the pattern designer will have swung the usual side-seam dart into this vertical seam, meaning that it will fit your curves perfectly, but the seam will look like an attractive style line, rather than a functional dart. All you really need to know is that the end result is that princess seams tend to be very flattering and replace the need for sewing darts. 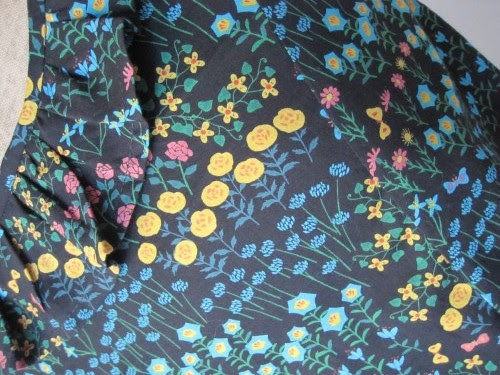 The dress slips on over the head, with no fastenings or zippers to negotiate, making it a simple and enjoyable pattern to sew together. The dress can be worn belted or loose and when belted it has quite a sweet, prim look, while worn loose it has a definite sixties feel. I wore it unbelted over a halterneck swimming costume around the pool on holiday. The cotton lawn that Christine sent for me was perfect for the Derby dress and I loved how the yellow flowers trailed down from the ruffle across the dress (that was an accident, rather than any cleverness on my part).
The only thing to note with this pattern is that the triangular notches (the markings that help you line up one seam with another) are on the outside of the cutting line, rather than the inside. I remember my pattern cutting teacher telling me earlier in the year that this is the standard way that notches should be marked within the industry, but if you're used to commercial patterns you may have come across this less. If I was making this again, I'd mark on the notches beforehand as there's a 5/8" seam allowance that can cope with notches being cut into it and, in my impatience to get the dress finished before the sun disappeared, I found them a little fiddly and time-consuming to cut around.
If you'd like to make a Derby dress yourself you can find the pattern at Backstitch in the UK or Europe (or from Christine's shop if you're not). It's a wonderfully versatile pattern (one version of the pattern features a Peter Pan collar which you can see Christine playing around with here or see her looking adorable in the finished version she made while on holiday in Paris here) and the fact that it's loose-fitting and without fastenings makes me think the unbelted version would also be a wonderful pattern for a nightdress if made up in something like one of Anna Maria Horner's unpatterned voiles.
Florence x
﻿
Email Post