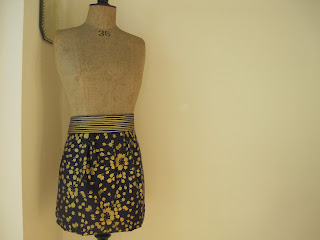 Yesterday an unexpected parcel, seemingly from Johnnie Boden, arrived on my doormat. I looked at the familiar spotty packaging and felt mystified by what it was that I might have ordered. Then I felt guilt. Do I really place so many Boden orders that I can't even remember what I've ordered? I didn't think so, but I decided to leave it on my desk while cutting fabric and not to open it until I could recall what might be inside. Four hours passed and I still couldn't think what it might be so I eventually allowed myself to peep inside. It was not a Peter Pan collared blouse, a pintucked shirt or even some of Johnnie's love wrapped up in tissue paper and placed in an envelope especially for me (I'm still waiting patiently for the latter), but some Gilt Trip fabric by Dear Stella, sent from Annie's Village Haberdashery who uses similar (but not identical) spotted bags to Boden for posting. Released from my own guilt trip I could swoon over the metallic fabric with glee. Annie had sweetly sent me a few fat quarters so that I could see what I thought of it. And it's glorious. 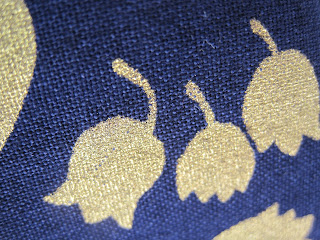 My initial thoughts had mainly been around how fantastic it might be for a sunglasses case, a tote bag or something similar. But something odd happened on opening up this fabric package: I started thinking about how amazing Gilt Trip would look as a skirt. Using quilting cotton for garment construction is a much-discussed topic amongst dressmakers and my own feelings fall heavily on the side of never using it. I'd go so far as to say that I'd sooner where a Lycra catsuit than wear a garment that I'd made from quilting cotton. It's a matter that seems to provoke extreme feelings in people. It's very subjective, but for me, the weave, drape and texture just isn't right for clothing. So it was a surprise and shock to my internal compass to suddenly be thinking that a quilting cotton may just make a perfect skirt!

The image of the skirt was so vivid in my mind that I took a pot of pins and began stabbing pleats to the waistline of Evangeline (who, due to her location in the dining room, doubles as my husband's imaginary work colleague and who he insists upon calling Derek!) and then folding the striped fabric to create a waist band. 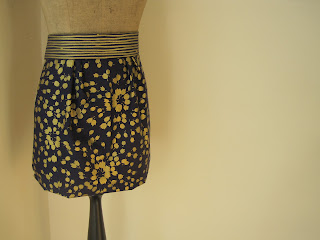 Look how the gold shimmers in different lights. The picture above was taken first thing this morning when my daughter discovered the previous night's pinning frenzy and shouted upstairs to me that she adored the skirt that the mannequin was wearing, at which point I went down to reassess matters as my children rarely notice any of the fabric creations going on around them now as it's just one of life's backdrops for them. The one below was taken a few hours later once the sunlight was less of a warm glow. 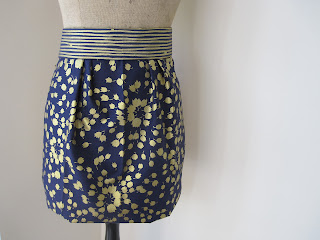 The golden buds and gilt stripes of Dear Stella's Gilt Trip seem to elevate it from a workaday fabric into something more refined and wearable, making it a highly versatile range of fabric. While I wouldn't make a drapey smock top from it, for a structured skirt or dress with a fitted bodice (and very possibly a twirly 1950s skirt) it feels just right. I can imagine wearing a skirt like this on Christmas day...so can my daughter.

If you're interested in seeing Gilt Trip in quilty form, you can find it on Dear Stella's website here. If you're England or Europe-based and thinking of buying some you can find it at the Village Haberdashery here.