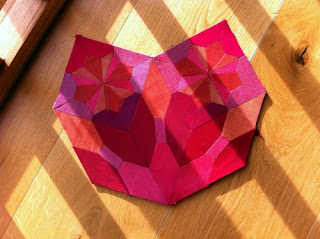 This week we went away with my parents. We never really plan to spend every October half term together, it just happens that way because we're not quite organised enough to get ourselves together for a summer break with them. But this time of year is actually perfect for an English holiday - our expectations for sunshine are low and so we dress for warmth, brace ourselves for inclement weather and plan a delivery of wine, chocolate and other essential food items to be delivered soon after our arrival to allow for complete hibernation. Even though we often walked for miles each day, it really did feel like a hibernation holiday, with the nearest town eight miles away and no mobile phone signal (although there was wifi). Our days were punctuated by walking, a pub lunch, the making of a fire, the carving of a pumpkin or the watching of a film. The weather was a mixture of torrential rain and sudden bursts of sunshine lighting up the fields which together formed an undulating patchwork of green, breathtakingly lovely and different from the brow of each new hill we climbed. 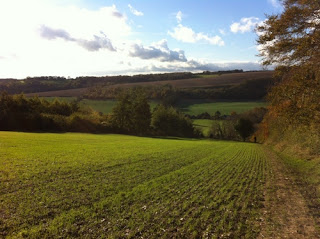 My daughter unwittingly brought along a bug which had been circulating around her class before half-term, and which gradually spread around our holiday party, but it was a deliciously cosy setting in which to be ill and it meant that a different group of walkers set out each day, while a varying collection of patients were left curled up on sofas in front of the fire at home. On one day I stayed home to administer the paracetamol and managed several hours of hand sewing: true hardship. I sewed together some of the paper pieces from the finalised design which I'd been discussing over the last few posts. The pieces seen here will eventually form part of the inner ring of hearts, before the pattern radiates out to bigger-scale, more floral piecing. Yes, it's a slightly different pattern to the one which I showed you in the last post - it underwent one final change before I consulted friends on Instagram for a quick verdict on which I should cut the pieces for. This simpler design won. 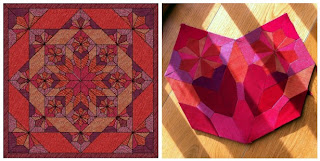 In between packing our bags I put together what, in retrospect, amounts to several weeks' worth of paper pieces, wrapped and ready to be sewn. I love to see the chaos of the tiny pieces with a sense of the promise which they hold: knowing they will eventually transform into something ordered once joined together. 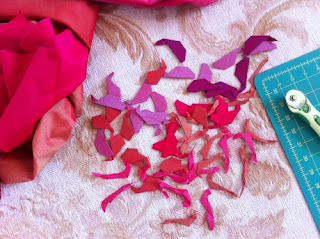 I am less enamoured by dealing with the centre point of each square where twelve seams intersect. Luckily the barn we stayed in was complete with a steam iron, which was a necessary companion in flattening the tails of the pieces into submission. As this piece is intended to be a framed wall hanging there is no need to worry over how it will be quilted or to think of bulky areas in a quilt: as long as it sits perfectly flat at the front then it's fine. 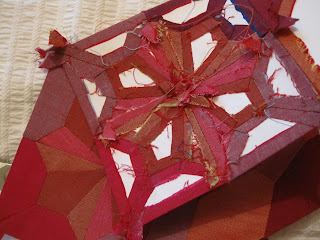 I have used a glue pen to secure the fabrics, rather than basting stitches. This worked better for the tiniest pieces. It also seemed the best option as I intend to leave the card in place so that there's no worry about it pulling out of shape while being framed. I also took along the Liberty quilt, which I continued to hand-quilt in the evening...having finished the quilting around the central medallion and between the tiny squares relatively quickly, I haven't even finished one of the four outer borders yet. I am berating myself for making the stitching so dense as I think I will be lucky to finish it by Christmas...possibly even Easter. I love how it looks, but it is moving at too slow a pace even for one who appreciates the joy in hand sewing pieces coming together at a snail's pace. I am tempted to unpick it and quilt it again using bands of stitching spaced further apart. 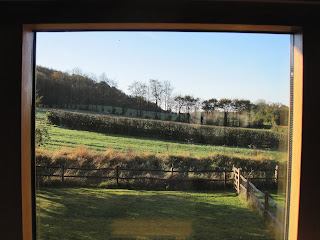 However, I love that there's now a holiday stitched into it as well as so many other things. Favourite memories from this week are: singing on the drive there and back to the holiday compilation CDs my husband had made; carving a pumpkin with the children; charging up the hill like a bull toward my father; hearing of how my little boy had cared for my daughter during the night when she first became ill; having human crab races across the large living area; seeing the children's glee at swinging on a rope swing found in the woods; watching from the window as my father took the children off for an early morning walk; lying in bed reading Monty Don's autobiography; adding logs to the wood burner while all the other adults were out (previously uncharted water as I'm not terribly confident with fire); seeing my mother reading to the children in the evening with them all piled into the bed; watching my father attempt to rescue my little boy from some mud which threatened to swallow him up like quicksand only for him to swing him round and deposit him barefooted in more mud, minus his wellingtons.
Finally, a realisation. I have always believed that living in less urban surroundings I would be the sort of creature who feels invigorated to go running. I have realised that I am not. I will happily run up a hill on a walk, but this week allowed me to pinpoint that I will not be a runner in any setting due to an intense dislike of putting on alternative footwear for exercise. Does anyone else suffer in this way? Or has anyone overcome such a dislike?
Florence x
Email Post