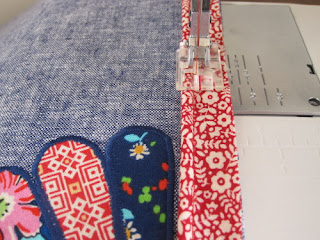 Finally, after the lovely half-term break, there is time to get back on with writing up the bag pattern which I was working on before the holidays - it seems to be taking an inordinately long time.

When I initially make something as a one-off I tend to construct it in the way which feels intuitive to me at the time, but I find turning it into a pattern normally involves a total rethink of the best ways in which to construct something: where to interface and reinforce; how to keep the layers to be sewn through to a minimum for machines which may not enjoy sewing through bulk; and ironing out the little idiosyncrasies in making something that feel fine if I'm making it for myself, but aren't necessarily how it feels right to instruct other people to work. 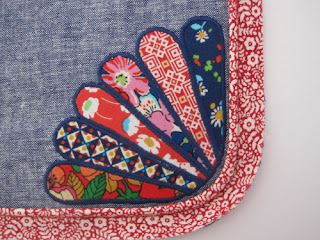 Once I've digitised (a curiously modern word, which I feel slightly odd using) the pattern pieces I always make up a pattern several (million) times before getting to the point where I'm happy with the instructions and feel ready to take the relevant photographs to illustrate each step. Really, it's like watching a tortoise work. Every element produces a strokey beard moment, the humming of my brain threatens to drown out the sound of my husband's music downstairs and just laying my head next to the iron-on interfacing may at times provide enough heat to fuse it to the fabric. But I feel oddly happy and cocoon-like in my tortoistry. 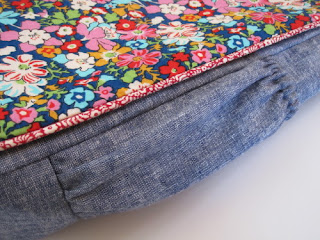 Finally, today I worked on the bag which will appear in the pattern's photographs, which makes the end feel a little closer. Happily, it was beautiful sunshine all day, so there was no English gloom to contend with.

When I've finally finished the bag pattern I'm planning a little spate of dressmaking. Having bought the Wiksten Tova PDF earlier in the year, last week I actually printed it out - it's sitting neatly in a pile and occasionally I catch sight of it and feel an excited sense of anticipation at the prospect of making it - I have never seen a bad or ill-fitting Tova, so I feel almost entirely optimistic about it (although I find dressmaking does require the spirit of an excited puppy at the outset of every new project - there's no way I'd be able to invest all those hours in making something if I thought it wouldn't look wonderful. A selective memory is required to blank out the times when things don't go to plan!). You may be interested to know - if you don't like downloads - that Alice has started stocking the Tova pattern at her online English shop. It's horribly expensive but I believe it is beautifully packaged and having seen that several people have made numerous versions, I think it probably ends up being good value for money if you're a smock top kind of girl.

Following that I'd like to make a wool jacket (Raystitch have some beautiful reversible wool which has caught my eye) to go with a grey and orange throat warmer my sister bought for me from Brora several years ago. Each year they produce a colour chart (several of which decorate the walls of our downstairs cloakroom) and that year they called their orange 'Pumpkin' which delights me almost as much as the Becca concealer in the colourway 'Praline' - the psychology of this is wonderful as it actually makes you feel quite lovely as you daub it over any blemishes.

I think often a name can very much influence how I feel about something - it took me a long time to accept that the 'Baked Cherry' on the Little Greene paint chart wasn't actually the right shade of red for our walls, I'd just fallen in love with the name. I'm still pondering on what to call my bag pattern.