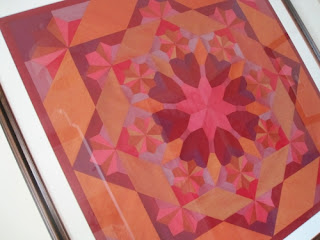 So it is finally framed. The feeling of having something completely finished is such a lovely one and what's finally here delights me. The fiery iridescence of the fabrics, the thick creamy white mount and the lovely walnut frame all feel as though they work well with the kaleidoscope and each brings me back to look at it and makes me feel happy when I walk into the room and see it on the wall.

I decided to have the frame made separately and to leave mounting the paper-piecing for the privacy of my own home where I could weep over my own uselessness unwatched if the stitches popped when it was being stretched or if I had to grimly accept that this was not a piece, with all its intersecting seams, that would ever lie flat enough for framing. However, Ruth mentioned that I may be best lining the piece with quilt batting and then, at places where seams meeting had created bulk, I should cut holes in the batting and allow the bulk to rest through, so that the wall hanging was an even thickness throughout. This turned out to be such good advice and was exactly what I did. 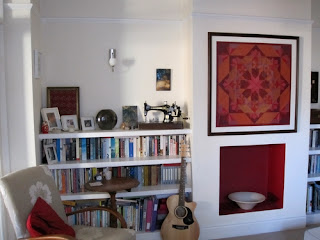 I then tried taping the whole thing to the back board of the frame, but it allowed for too much movement and the wine coloured border wouldn't sit evenly inside the white mount, so eventually I used 505 basting spray to glue it to the board and that worked perfectly. I now wish I'd taken photos to show you how Ruth's technique worked, but it was actually too fraught an experience to think of cameras at the time. 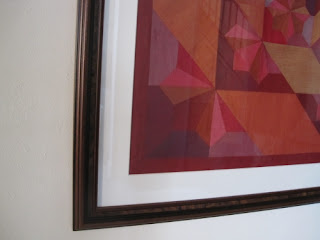 The walnut frame feels just right and shares the same warmth as the Oakshott fabrics. ﻿Oddly, now it is in the frame it no longer feels like my work, nor does it have any of the familiarity that it held over the weeks in which I was sewing it together, so when I look at it it's a surprisingly objective, detached experience. There are a few places where the stitches became more visible when it was stretched over the frame, but rather than feeling distressed by these I think I rather like them. When I look at the work of others it's often the signs of a human hand that I like the most - in the same way that a person may loathe their own slightly crooked teeth or unsymmetrical face, it's these bits that add character for an objective onlooker and that, similarly, I find myself focusing on in the sewn work of others - there's warmth in slight imperfection. Being able to look at this more objectively and separate it from myself means, thankfully, that I can enjoy those aspects of the wall hanging, rather than wanting to tear it from the frame and stamp on it. That's a good thing. 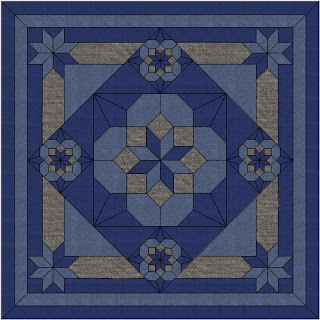 The intricate piecing of this wall hanging has triggered something in me that wishes to be in possession of smaller fingers than I am currently. Only hours after the Oakshott rubies had been hung on the wall I cut into the three shades of Oakshott Liparis I'd bought in order to make my parents their Christmas gift. I've finally come up with a design that I think I feel happy with (but do feel free to wade in as you were so helpful in pointing out things I hadn't seen in the early stages of plotting my rubies wall hanging). To me, the flowers echo the art deco style that my parents are often drawn to when choosing furniture and I think the limited colour palette is minimal enough to please my monochromatic-loving father and please my mother who delights in shades of blue. 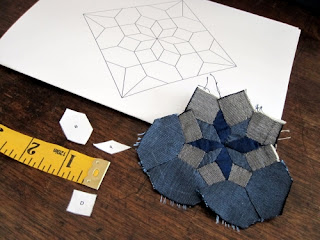 The picture above shows the half-finished pieces I was working on last night - it's hard to get a sense of the scale of this, but the silver squares are smaller than one of my fingernails. This hasn't been made with the English paper piecing method, which I used for the rubies, but is simply hand stitched with the tiniest running stitch I could manage. There is something thrilling about reducing your stitch length down to a fraction of an inch - one momentarily feels like one of the shoemaker's elves. However, I'm yet to decide whether to carry on in this vein or whether to increase the size a little. The rubies wall hanging ended up being 32" square and if I continue at this size, the wall hanging for my parents will be 26" square. I cut the size down by 6" as it seems like a very large wall hanging to impose on someone else's home unasked for, but I'm unsure if I'm actually capable of stitching at this miniature level and creating something lovely - without the paper pieces in place the work will be more prone to stretch and pull out of shape and it's a difficult thing to remedy when working at this scale. 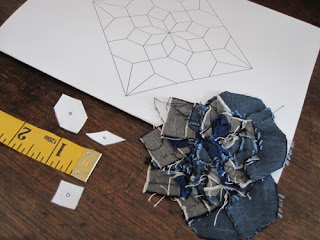 This is what the reverse of such a piece so small and densely pieced looks like: chaos. It wouldn't be an easy thing to go in and remedy an area where I felt in retrospect it needed to have a sharper point or had been sewn a little wide - the seam allowances are invariably larger than the shape being formed. I was intending to work on it again today, but have reached a point of paralysis - there's the wish to challenge myself and the enjoyment of the tiny running stitch, put against a Christmas deadline and a worry that hours of work and fabric will have to be abandoned if I can't make the thing hold its shape - it has never been one of my strong points to know where on the grain to place an oddly shaped piece of fabric in order to reduce the bias it will have.

How are your own Christmas projects going? Have you used an of the Rubies or Lipari yourself? I'm finding that working with it is becoming rather addictive.