Hopefully not a Red Setter 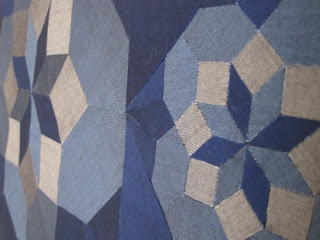 Christmas is only eleven days away and I am quite a long way from finishing the paper pieced wall hanging that I'm sewing for my parents. However, I have at least finished the first inner round. 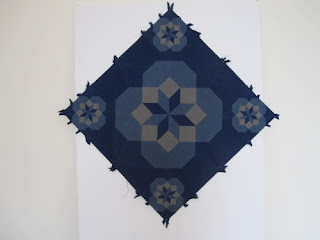 As ever, the Oakshott shot cottons delight me - while the colours appear quite flat and deadened when viewed straight on, as in the photo above, when you approach it from any other angle it suddenly leaps into life and makes the design look multi-faceted in an extraordinarily three-dimensional way. 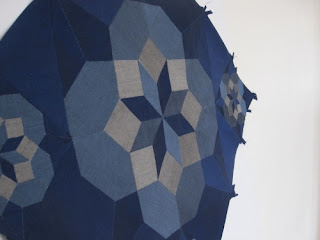 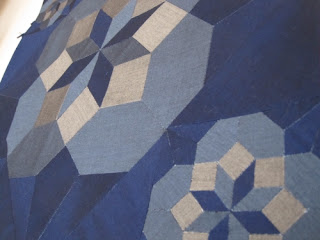 ﻿
I collected the frame that I've had made for it this morning, which is only making me want to stitch faster so that I can get it safely set inside. There's an undercurrent of worry that accompanies its construction until I know that it will definitely look right and sit nicely behind the glass and I've been mentally sorting through possibilities for panic purchases that I can make if it doesn't end up happening. To everyone else this is a wall hanging, but for me it feels as though it has the potential to sprout paws and turn into an unwanted Red Setter dog (possibly the thing that would most horrify my mother were I to present it to her on Christmas day) if it doesn't turn out quite as I'd been hoping. The reality of handing over a creature that takes up 36" of wall space in somebody else's home that they hadn't asked for is now weighing rather heavily on me. Perhaps next time I will attempt postcard sized pieces as gifts.

Ps. To anyone with a beloved Red Setter who may be offended by this post: the reason the focus rests on them is purely because this is actually my father's dream dog and so it has become a particularly feared breed due to the potential for it to be an unwelcome reality in my mother's life, not because she finds the actual dogs unpleasant...she just doesn't want one herself (a feeling which I can totally relate to as my own husband becomes worryingly dreamy over Labradors. We once went for a bike ride with another family and their chocolate Labrador and on our return my husband and children both confessed that they had been riding along proudly pretending he was theirs. I had been riding along feeling horrified by how it dived into every puddle and stream and then shook itself violently spraying a shower of mud over anyone foolish enough to be nearby, ran in front of the bike wheels and generally dashed about in an unrelaxing way. I think you're probably either a dog person or you're not).
Email Post