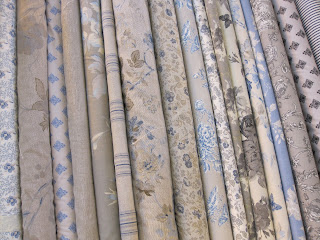 My sewing has finally been forced to come to a stop as we reach Stage 2 of 'Every Floor in My Entire House is Being Sanded', so I've spent the morning updating my list of online UK fabric suppliers, which I've been meaning do for a long time, as that post dates back to 2009. Sadly, some of the links led to shops that have now gone out of business, while there were also a few glaring omissions where new ones have sprung up. 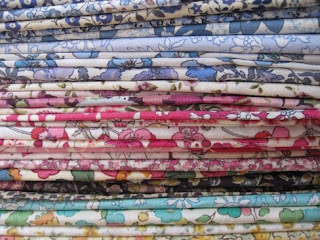 Do go and have a look at the list if you're interested to find new fabric shops. Where a supplier is relatively unique in stocking a certain thing or specialises in particular areas I've put a note saying so. 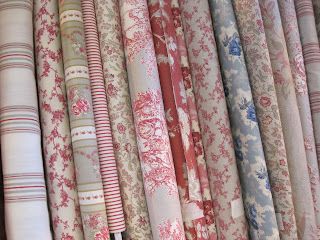 I also wanted to draw your attention to a couple of bookish finds too. I discovered Kaleidoscope at the quilt show in Birmingham last summer. Their stand had a quite staggering selection with virtually every obscure sewing book you could wish for (including a vast array of Japanese pattern books), so it was exciting to find that they were intending to launch a website (now up and running). They're based in Scotland and offer flat rate postage throughout Europe. I placed an order with them before Christmas and my book arrived speedily, so I feel completely happy to recommend them to you. 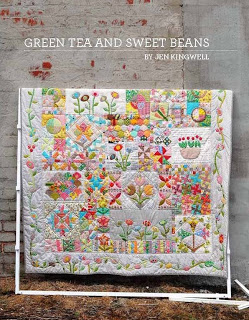 I also stumbled across The Running Chicken late last year and have seen that they are stocking a wonderful selection of QuiltMania books (usually only available from France) as well as Jen Kingwell's beautiful pattern, Green Tea and Sweet Beans (usually available from Australia and which Danielle tells me is a wonderful pattern for dabbling in some hand stitching). They also have a good range of reproduction fabrics, which I adore but which can sometimes err on the side of sludgy, but I think the selection here manages to avoid this. I feel most excited by a shop that is winkling out these kind of treasures that aren't easily available elsewhere in England (I'm yet to order from them so can't vouch for their service). 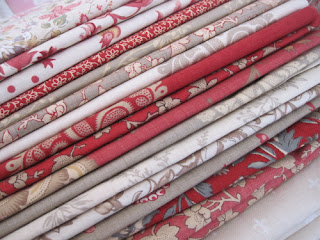 When I re-read my original post that went with my list of fabric suppliers I was shocked to remember just how difficult it was to buy lovely fabric in this country prior to 2009 - it really had been a case of having to place bulk overseas orders up until that time. It wasn't that there weren't fabric shops in England before that, it was that they tended to predominantly sell slightly stuffy, out-dated ranges. So it really was incredibly exciting when all these amazing fabric shops began springing up in England and I felt so grateful that they'd taken the initiative to do so. I wonder if the risk involved in starting an online fabric shop then is a different one to that which might exist now. In the last few years, sewing has become so wildly popular that I'm imagining the concern now isn't so much 'will people want to buy fabric online', it's more 'how can I differentiate my fabric shop from the hundreds of others'. 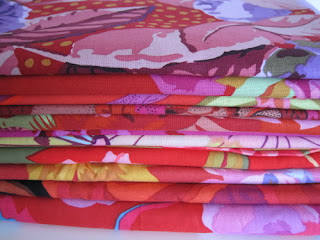 But many of the shops do seem to have a different feel to one another and have created a cohesive defined style with the collections they choose to stock. I buy much of my fabric locally, partly for convenience, but also because it feels important to support highstreet shops, however, when they turn up a blank for something I'm looking for, I often begin visiting shops online. If you rarely shop online, but would like to and feel overwhelmed by the long list of fabric shops I thought it may be helpful to mention which shops I use as a starting point when seeking out new fabric (you can find links to all these shops here).

Depending on what I'm sewing or who I'm sewing for depends on which shop I head to first. For slightly traditional fabrics that might suit my own house I tend to go to Hulu Crafts, Oakshott, Eternal Maker or the Quilt Room and then Shaukat for large cuts of Liberty prints. For dressmaking, using unpatterned fabrics such as cord, wool or linen, I'll look at Ray Stitch or Dragonfly Fabrics, or M is for Make for the Nani Iro double gauze. If I were sewing for friends with a more modern and minimal aesthetic to their home, then again, I'd go straight to M is for Make. For children's prints I peruse The Village Haberdashery, Backstitch, Holland Fabric House (not in the UK) or perhaps Saints & Pinners. If I'm looking for inspiration and ranges that I haven't noticed elsewhere then I look at The Eclectic Maker, who mix some unusual collections (such as the V&A Benedictus range) in amongst their more widely available ones. If I wanted to find something one-off and precious, I'd visit Donna Flower and immerse myself in the amazing collection of vintage textiles (my husband has bought me several pieces and they tend to have a delicious fragility to them).

So do go and have a look at the list if you'd like to discover some new favourites. Let me know in the comments if you have any haunts you think I might like, which don't appear on my list - I'd love to know what your favourites are and why you're drawn to them.