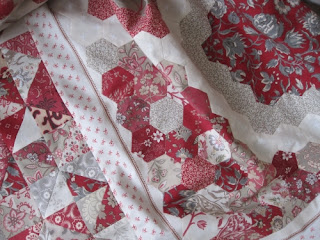 In amongst the disruption of floor sanding I have ended up doing a small amount of sewing, albeit with my sewing machine on a low coffee table and me sitting on the sofa - it requires an odd body posture, but at least it allows me to feed the sewing addiction. I started 2013 determined to finish a few of the half-finished projects I've had left over from last year. I've surprised myself as I rarely used to start a new project before finishing the last, but hand-sewing changed that as it encourages you to have some projects running in tandem - those by hand that can be done here and there, and then those on the sewing machine, which tend to be more quickly finished projects. 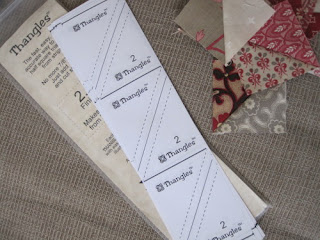 The majority of this Rouenneries quilt top is hand-pieced, but I've now started adding some borders of half square triangles to the sides and these are being pieced on the machine using Thangles. Thangles are relatively new to me - they are basically a very accurate way of sewing HSTs (half square triangles), as you simply cut your fabric into strips and then sew on the dotted lines. Once sewn they can be pressed, cut along the solid lines, pressed again, before finally pulling the paper away. Personally, I don't think it shortens the process, in fact, I think it takes a longer (I sewed hundreds of them without using Thangles when making this quilt). However, I'm not sure I'd sew a HST without them now, as they make your sewing so incredibly accurate and perhaps best of all, they ensure that the bias of the fabric is always on the diagonal seam, so that you're left with edges that won't distort as you sew them to other things. I find it slightly exhausting thinking about grain lines with any shape that isn't a square, so this really appeals to me (yes, these end up square, but initially you're dealing with triangles). I bought my Thangles in several sizes from Kate's lovely shop (Kate links to this video tutorial, which explains exactly how you use them) - I can't recommend enough trying them out for yourself. 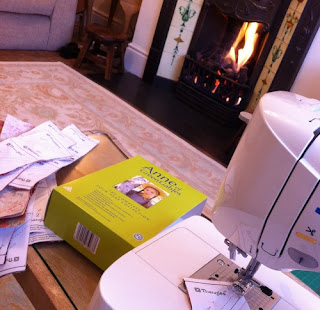 It began snowing in England on Friday and the country now seems to be under one large not-very-warm blanket. We stayed in our one usable room and watched nearly the entire box set of Anne of Green Gables with the fire on (and because my new sewing machine is so quiet, I was able to sew at the same time), punctuated by going over to see friends for dinner, a first sleepover for the eight year old (adorably, they fell asleep early and he returned a perfectly normal human, rather than the tearful beast I'd been anticipating), and some sledging (theirs, not mine this time as I couldn't find any wellingtons for myself as everything is so disorganised). 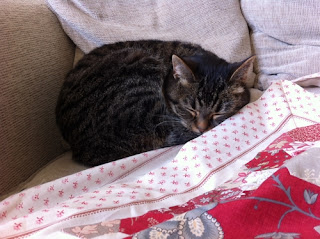 The cats were shocked by the removal of the carpet and, for the first few days, each time they came in through the cat flap they ran straight back out again, terrified by all the machines and men. Finally though, I came home one day to find that our tabby had carefully picked her way through to the only place on the sofa that wasn't covered by my quilt top and curled herself up into a tiny ball in the corner - she always astounds me with quite how considerate and sweet she is. She somehow seems to know that lying in the middle of the half-finished quilt top wouldn't be polite. 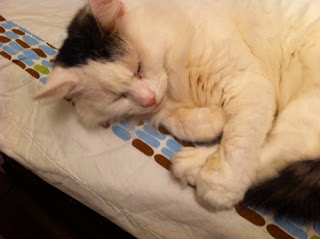 Our other cat has found a home on top of the piano, which is currently living in the utility room covered by old quilts. I love how her fur is yellowing slightly as she gets older - it makes me think of a well-loved teddy bear. 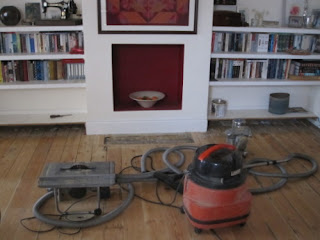 After being adamant that our floorboards must be oiled to a very dark finish, after several days of gap-filling with slithers of wood (it is now so cosy and warm!), we finally got to the sanding part this morning and I like the natural wood more than I'd expected. It's probably not what I'd pick out myself, but I'm wondering if it suits other parts of the house a little better than my drastic plans, which will involve a thousand other things having to be changed in order to make it look normal. The indecision continues.