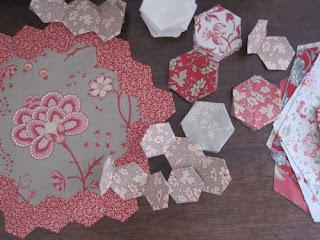 I've trawled though my blog trying to discover if I've already talked about sewing English paper pieced shapes to a central medallion, but the post I'd intended to write about this last summer can't be found, so I'm assuming not. When I was piecing my Rouenneries quilt it was the first time I'd attempted to sew pieced shapes to a medallion. I believe there are several ways of doing this and the one I tried first I know works for many, but sadly not for me. Initially, I used fabric glue on the back of the hexagons and, with my medallion sitting smoothly on a flat surface stuck the hexagonal border to it. All seemed well, but as I sewed I felt that the central piece of fabric wasn't lying quite as taut as I would have liked. No amount of easing it back into place and re-gluing it with better tension worked for me. It wasn't awful, it just didn't look perfect and the rumblings of an internal duck-fit were felt I'm unsure if a duck-fit is a widely used term, but my mother has always described the feeling of flapping around in despair or frustration in this way, which I think is such a lovely image (that of ducks suddenly flapping about, seemingly on the surface of the water, quacking frantically and flapping their wings and spraying water all about. It's always an unexpected event that seems to come out of nowhere).


One way of doing it would have been to create a central English paper pieced medallion which perfectly followed the inside edge stepping-stone line of the small hexagons and then sewing them together in the conventional way for EPP, using an edge-to-edge whip stitch. However, not only would this be fiddly to cut, but in the case of these shapes it would be virtually  impossible to wrap my fabric around so that wasn't an option. 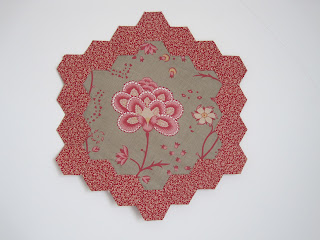 Eventually I found a way of attaching my pieces to the central medallion that made me feel altogether more swan like. My problem was all about tension, so it made sense that if I was sewing hexagons of fabric that were firmly wrapped around card, then my medallion should have an identical tension brought about in the same way. I cut a template a little bigger (by about 3/8") than the aperture created by my ring of hexagons, so that I could sew them to the top of this shape. I sewed the medallion into place by using something which probably most resembles a whip stitch, but with not quite as many stitches per inch as I'd normally do for standard EPP. I sewed the inner edge of the small hexagons to wherever they rested on the central medallion. I lifted the fabric away from the card a little with the tip of the needle to make the stitch as it's really important not to let the stitches go through the centre of the medallion as it would be almost impossible to remove the card afterwards. When you're doing normal EPP if the odd stitch goes through the edge of the template it's not the end of the world because it will perforate the edge and still pull away easily. Here though, the stitches are made about 3/8" in from the edge of the card, so it would be disastrous (and may cause an unforeseen duck fit when it comes to trying to separate the two). 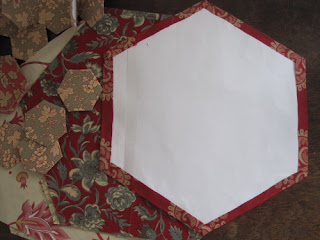 My medallions were actually a little bigger than an A4 sheet of card, so it involved sticking two pieces of card together with glue (as above). It's far better to do this with glue, rather than tape, as it meant I could press my work with the card still in place, once I'd finished. This stabilises the fabrics prior to card removal and has the additional benefit of the heat of the iron warming the glue a little, making it easier to separate the card from the fabric.

I'm yet to find a solution to the problem of finishing this project with any kind of speed, but I quite like that it's something I've picked up and put down over the last seven months as working with these fabrics still delights me.