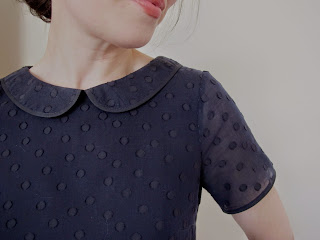 I actually started writing this post yesterday, but didn't get a chance to finish it and overnight I've discovered that one of my Laurels (below) that I entered into the Colette Patterns Laurel contest has won second prize in the 'Added Detail or Embellishment' category! I'm so flattered to see my top alongside such amazing dressmaking talent - do go and check out the other winners. If you quilt you'll especially love the dress which won first place in this category as it combines precision piecing with dressmaking. 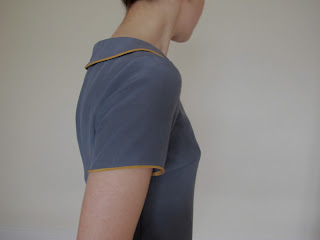 So, topically, this post is about one last Laurel (no, I don't actually believe that either, but I feel the need to at least attempt to offer up the illusion of there being some diversity to my dressmaking). I actually made it a few weeks ago, but I've been crazily busy and I haven't had time to blog about it until now. This one is interlined, as the cotton was very sheer. 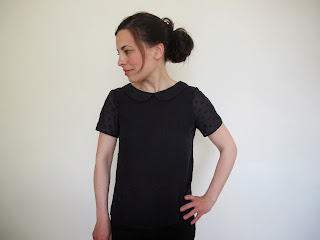 For those questioning the difference between lining and interlining: if you line something, essentially you create an identical garment and then sew the two garments so that seam allowances are sandwiched, unseen, in the middle of the two. If you interline something, at the outset you simply sew two pieces of fabric together and then treat them as one - this way doesn't hide any of the seam allowances, but that wasn't necessary here as I was using french seams.

I used an incredibly fine voile for the interlining that had the exact weight and drape of the large spotted dobby fabric (is it dobby when the tufted spots are this large?). Out of the three Laurels I've made, I attached one collar with a bias binding finish, another as a traditionally-installed Peter Pan collar covering the join with a strip of bias inside the blouse, and for this final Laurel, I went off piste entirely. 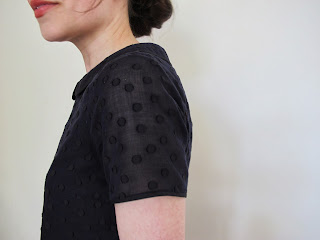 I left the sleeves unlined as I quite like being able to see the fabric as it really is here.

It's actually my least favourite of the three Laurels I've made, as no matter how fine the fabrics are, two layers of fabric won't replicate the flowing drape of silk. Silk tends to fall over your curves, and has a slight static that makes it follow the exact line of your figure, but without being clingy. An interlined cotton, no matter how light both the fabrics are, tends to fall over your curves, but then stands proud from the body. Everyone tends to have an issue that they are mindful of when dressmaking and mine is a big-bottom-in-relation-to-the-rest-of-me, which is exacerbated by having a very, very short body (because how much back can you realistically squeeze into 5ft1" without losing room for legs, neck and a head?). If the drape isn't just right it can make things look even more out of proportion; if the fabric doesn't fall back in at the the waist and stands proud of my body from bust to bottom (yes, I know they're on different sides of my body & that's what makes for a double-width tube!) it can make me look slightly shapeless. The photo you see below is the 'flattering photo'. I'm having to delete the 'unflattering truth' photo from my memory or I may not be able to actually wear this top. It's an interesting experiment to make so many versions of the same top and to observe how it can morph from flattering to unflattering purely because of the drape of the fabric. I like how it looks from the front though, so it may get some heavy with-cardigan usage. 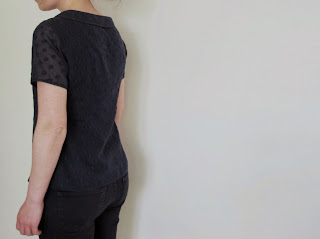 Hence why I think I may make another Laurel as I'd still really like a practical cotton version, but perhaps in a cotton that isn't so sheer that it requires interlining, which would hopefully make the drape less of an issue.

I usually make my own bias binding in self fabric or a contrasting fabric, but for this top I used pre-made bias. I actually love working with the pre-made version - the bias strip is so heavily starched that it's easy to manipulate and the pre-formed creases are satisfyingly crisp. It seems to knock so many minutes off construction time! 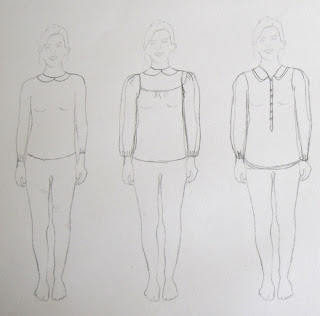 The inspiration for this top and the fabric use actually comes from something I pinned on Pinterest over a year ago. My version seems rather demure next to the original foxy inspiration top, but I'm not sure I would wear something quite that see-through....or with such puffy sleeves. Interestingly, it's only since making up my book of croquis that I've been able to see why, despite my absolute love of puffed sleeves (who couldn't watch Anne of Green Gables as a child and not develop a life-long love of them?), they will never suit me. If you look at the photo above, you can see it's really only the top on the left that actually flatters my frame. The rest give a very curious effect indeed.

If you'd like more Laurel inspiration, you can find plenty in the Colette Patterns Flickr pool. My prize for coming second was £50 worth of Colette Patterns! I'm more than a little excited by that proposition - my quick trawl of the Flickr pool has made me think that a Hazel and a Peony dress pattern seem to give a good fit and look consistently lovely in the photos in the pool - do you have any recommendations of your own? I'm also pondering the Sencha blouse, but I'm not sure if there's too much going on around the waist that may overwhelm my petite frame. I don't actually dislike being small at all, but I do look at my super-tall mannequin and think that it must be so much easier to carry off any piece of clothing if you have more height. Although I'm sure that comes with challenges that wouldn't even have crossed my mind.

I'm not sure if I've mentioned the freakish thing that happened when I was pregnant for the first time - I grew! When I returned to wearing some of my old clothing, once my daughter was here, I realised that most of my clothes seemed a little shorter. At first I thought this might be because I was a tiny bit bigger and so perhaps I was wearing them in a different way, but eventually I got my husband to measure me and we were both alarmed to find that I'd gained a whole inch in height! That pregnancy had been hideously uncomfortable and it seems it stretched my vertebrae out somehow - who knew that could happen? And just in case you're wondering, my second pregnancy passed without any height adjustments, despite my husband anticipating that if we were to carry on having children I would eventually tower over his 6ft2" frame.