How NOT to make a dress-form 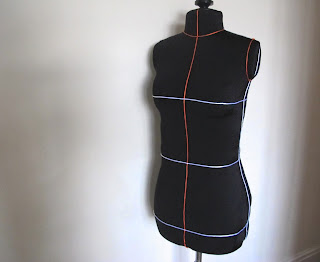 If you follow me on Instagram you might have seen some curious photos of me having a custom dress form made last week. I've always wanted a body double to help with some of the trickier aspects of dressmaking - like pinning things on myself - but also for experimenting with drafting patterns by draping fabric, rather than relying solely on the flat paper method. (You can see some of the in-progress photos on the third row down). 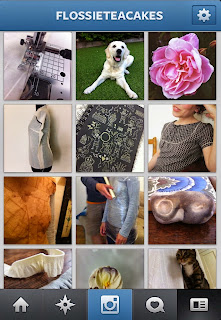 Over a year ago I'd bought the supplies to make a dress-form using the gummed paper parcel tape method, but then an evening where I could be wrapped up in tape never seemed to present itself and I put the idea to one side. However, last week just such an evening arose (I remembered the tape and there was a football match on which my husband could watch as he taped) and so we set about making a papery version of me. If you haven't heard of this before, the process is that you wear whatever old, but fitted, clothing you have to hand. You then ask your assistant to wrap you in cellophane (cling-film) to avoid getting too wet and cold and then tiny pieces of tape are dipped into a bucket of water and stuck onto your body to gradually create a body-double. The tape will eventually dry and when it does a crisp, fairly substantial, shell will have formed around you, at which point your assistant can release you by cutting up the centre back of the shell. 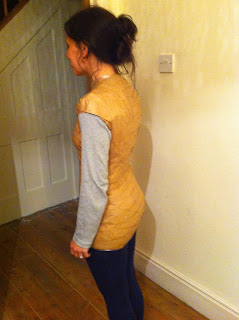 It took two torturously long hours of standing extremely still, unable even to shuffle from leg to leg, during which I questioned who would willingly choose to be a beefeater to the Queen. By the time my shell was being dried with a hairdryer I felt wet, cold and exhausted.

The next morning though, it all looked rather impressive, aside from it suddenly becoming obvious that my bust must have been somewhat flattened by the cellophane. However, with the paper tape method it's not too difficult to add to an existing form. Unfortunately though, my sculpting skills are limited and I ended up with one side rather larger than the other and no amount of extra padding, covered by more bits of paper tape could rectify the problem. Eventually, I decided that the only option was to turn a blind eye to my lopsided figure and to press on, hoping it would magically rectify itself at some point.

I stuffed the paper dress form with old offcuts of quilt wadding and made a stretch Lycra cover for it. Once covered, I stood back to admire my work and felt perplexed that my bottom appeared to be so much larger than I had imagined it to be, or even remembered it to be when I'd seen the dress form cut off me for the first time. I also felt quite surprised by how rounded my back appeared.


I left the stuffed form in the corner of our bedroom overnight and was woken the next morning by my son asking if he could go down for breakfast. As I tried to focus on the clock to see how early it was, he surveyed the mannequin with amusement, asking 'why does it not look like you anymore? I thought it was meant to be you?' At which point my husband sat up to see what he could be meaning and told me that my stuffing had indeed distorted its original shape and it no longer looked anything like me. On measuring it, its hips were indeed 4" bigger than mine. My enthusiastic if-I-stuff-this-dressform-really-densely-it-will-be-totally-fabulous-and-long-lasting ethos was ultimately my downfall. Damn. Although, I still feel really confused by this - how can paper stretch? It simply can't, so the whole thing seems a bit of an upsetting anomaly and I'm still left wondering where I went wrong.

By this point I was feeling rather disappointed. I'd been hugely excited by the prospect of finally having something that I'd spent several years pondering and now it was misshapen beyond repair and the remnants of it were being worn around the house as armour by children pretending to be Roman soliders (with a large bust). I couldn't face the prospect of being wrapped up in cling-film and parcel tape all over again, even though my husband offered to repeat the exercise that very evening.

Instead, after inspecting it for spiders, I retrieved my old mannequin from the garage and set to work on her instead. This mannequin is a petite adjustoform, but she really is very, very petite and much slimmer than me, with an almost non-existent (but enviably high) chest and no sign of a bottom at all. No amount of being able to turn the dials to make her larger can replicate my figure, as she just becomes bigger, but without any increase in lumps and bumps. However, I've discovered that a mannequin that's smaller than you is a good thing as she's a blank canvas on which to impose your own figure. I was able to pad out a bra on her, before adding some wadding to her bottom too. 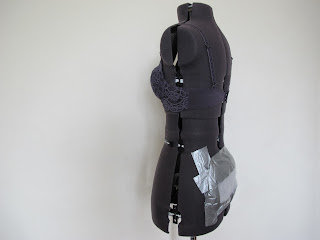 I then stood back-to-back, side-to-side and front-to-front with the dress-form and my husband assessed whether we were identical from every angle. After much dial turning and re-padding he declared that she did indeed look just like me (although I rarely wear quilt batting taped to my bottom with Duck tape). I made another black Lycra cover to disguise my additions and provide something to pin to. 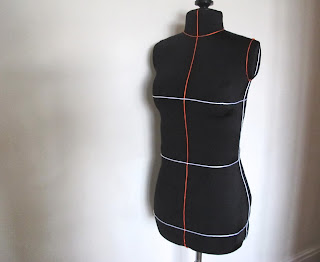 Once I was sure that I was happy with everything, I set about adding some lines that would make drafting patterns directly from her more easy. Traditionally this is done with something called Bolduc tape, which I was unable to buy. In its place I bought some cord that's a little like very narrow, flat shoelaces. It took two evenings of hand-sewing to attach them all and get them placed just as they're meant to be.

I've now spent a substantial amount of time working with her and feel really quite delighted - she's absolutely perfect and the guide lines now seem worth the investment of time to get right, as they're incredibly helpful for draping the fabric properly. It feels rather a traumatic path to get to this point, but I thought it was a tale worth sharing, so that if you're tempted to make your own body-double you may be able to learn from any or all of my many mistakes.