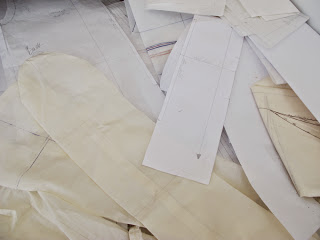 My sewing time over the last few weeks has been spent buried beneath a pile of drafting paper and muslins.

When I went on a pattern drafting course at the London College of Fashion last year I learnt so much, but I'd also hoped to come away with a usable sloper on which to work from...unfortunately, their standard pre-drafted slopers were just all wrong for my own body and no amount of fiddling around made it feel quite right, so it felt better to start from scratch. While drafting a bodice from scratch that fits perfectly is relatively trouble-free, I've never quite succeeded in drafting a sleeve pattern that fits perfectly - there always seems to be some kind of compromise or way in which I'm left feeling it could be better next time.

So in my last few weeks running up to the summer holidays I determined to spend whatever sewing time I've had at my disposal cracking my sleeve issues. I have drafted sleeve after sleeve, toiled each one and then taught myself how to make proper changes to them by studying from a multitude of books. I have a new appreciation for how the sleeve must work with the whole bodice, rather than seeing them as two isolated things, where only the armhole and sleeve cap must marry up. My dressmaker's dummy, with all its balance lines, has allowed me to finally understand visually whether a sleeve is technically right, as well as just looking 'sort of right'. It's always unnerved me to put a sleeve in knowing that while I might have made it work somehow, it may not be technically correct, so it's a little bit thrilling to finally create a sleeve sloper where the balance lines on the sleeve and bodice pieces match up perfectly, the arm can move freely without pulling at the bodice or over the bicep* and there's just the right amount of ease at the back of the arm...it's taken such a long time to get to that point.

So with very little to share with you other than a pile of paper and some cotton with lines drawn all over, I'll tell you about 'other things' that I've been enjoying. 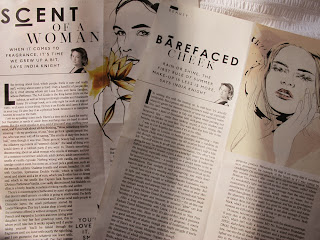 Every Tuesday for the last few months the postman arrives with a card from my sister. Inside, torn out from the Sunday Times at my request, is India Knight's beauty column. These columns are utterly self-indulgent, but also quite delicious. I save each new installation to read when I get into bed that night and at around six o'clock in the evening I'm already looking forward to the moment when I can begin reading. I have no idea quite why her column is so compelling as I haven't bought any of the products that she's recommended (due to them being obscenely expensive), but I love how geeky it is, how seriously she takes it all (while pretending not to) and how, for five minutes at least, it offers up the curious idea that the solution to most problems may be solved with a particular jar of something...or just a Mason Pearson hairbrush (my daughter was given one of these as a gift on her first birthday and still uses it every day a decade later and she does indeed seem a happy creature, so I'm very tempted by one of these). I think having it a arrive as a page quite separate from the rest of the newspaper adds to my pleasure in it. When I'm not eeking out my one page from the newspaper, I'm attempting to read Instructions for a Heatwave

by Maggie O'Farrell - I've read most of her books and loved all but one, so I was delighted when a friend bought a copy of this for me and the title feels particularly pertinent as England sees itself in its second week of temperatures comfortably above freezing. Unfortunately though, every time I open it to read, I fall asleep almost instantly and it's taken me nearly two weeks to finish the first chapter. This is no reflection on the writing as it actually seems like it's going to be very good and I'm looking forward to an evening when I manage to keep my eyes open and can get stuck into it. 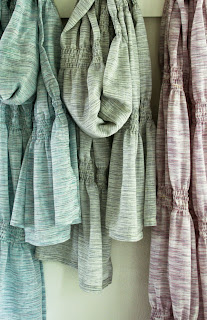 I spotted a tutorial for making these scarves last week on the Purl Bee. Despite have had a shirring addiction in the past and owning a shop-bought scarf almost identical to the ones shown above, it had somehow never occurred to me to reproduce the scarf and make it in other colours until I saw this. You can find the Purl Bee's tutorial for doing so here. I love this idea. 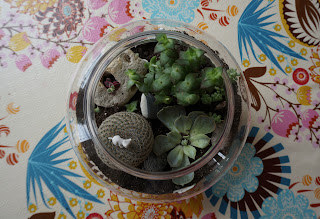 A few weeks ago I also bookmarked a brilliant tutorial from Kate about how to make a terranium. I'm now keeping it up my (much toiled, finally balanced) sleeve for something to do with my children over the summer holidays. Whenever we go to the garden centre my children make a beeline for the succulents and cacti so I know they'll love the idea of creating a miniature garden from them and it has a feel of the gnome garden about it that I so enjoyed making with my grandmother years ago (pictured below)...especially as Kate has curiously chosen to add polar bears to her terranium. Thank you for the inspiration, Kate! 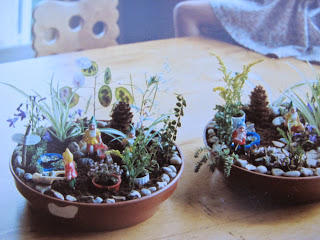 Finally, and unrelated to anything, I had a bowl of Cocopops last night for the first time since I was about eight years old. I have a mixed indulgent-puritanical food stance: I'll happily eat chocolate and cakes, but I don't buy any foods that could be savoury - such as a breakfast cereal - but have been meddled with to make them something other. I prefer to eat healthily when I'm eating a meal and to have a treat clearly defined as a treat, rather than a pseudo-meal. I've no idea why the Cocopops made their way into my basket, but I think I may have been subconsciously pondering making rice crispy cakes, but was unable to find the plain variety in our tiny local shop...at which point something short-circuited and their bechocolated cousins came home with me anyway). They are pure heaven! I had forgotten quite how good they are. I'm now considering saving them as a weekly Tuesday evening treat to be consumed alongside the India Knight column. Although their presence in the cupboard causes much consternation due to them having been given a household 'sweets', rather than 'cereal', classification. There have been requests to trade in Saturday Sweets in return for a bowl. No rice crispy cakes have been made as they are perfection on their own. Without any milk. Eaten with a teaspoon to make them last longer.

* A bicep makes me think of muscle. In the absence of any visible muscle I take this to be a mid-point on the upper arm and hang my head in shame.
Email Post