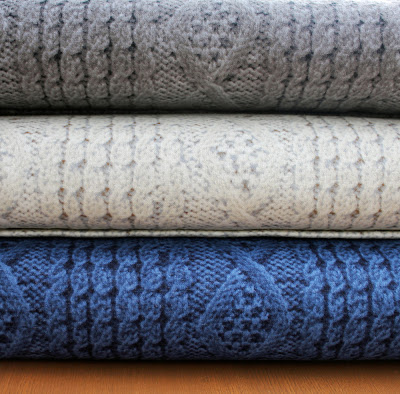 A few nights ago one of those absolutely huge spiders that only ever usually appears inside in our house in September scuttled across our bedroom floor, and it felt like an indication that Autumn is on its way, even though we're only half way through August. However, as England recently had two weeks of glorious sunshine I feel satisfied that we have had 'a proper summer' and so I'm ready to welcome Autumn without the sadness of having had my hopes for a summer cruelly stolen away by a large, drizzly raincloud. 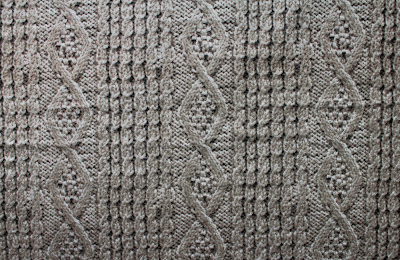 Which is perhaps why when I saw a photo of some beautiful wools that Frances (owner of the lovely Etsy fabric shop Miss Matatabi) had posted on Instagram, I felt instantly excited by them, for embracing Autumn, also means an onset of sewing with a different season in mind. But these wools are in fact wolves in sheep's clothing! Only with none of the nasty wolfiness...just goodness! Because they're not wool at all. They're actually a 100% brushed cotton double gauze fabric that looks like knitted wool, but feels like flannel. Now try and untangle your brain. 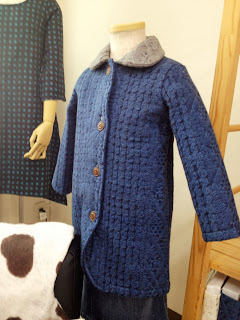 The jacket above is a sample made up by the fabric manufacturer, Home Craft. Yes, it looks totally like a knitted jacket, doesn't it! I asked Frances if they'd interlined it, as even the thickness of it looks realistic and she told me that she thought they'd used something akin to quilt batting that made it thick and very soft. For some reason this curious fabric completely fascinates me (I think it's doubly appealing for a seamstress that can't knit!). And I love the idea of being able to have the look of knitted wool, but none of the scratchy, bobbling that can sometimes accompany it or having to cope with its stretchiness while sewing. I can imagine this as tops, dresses, skirts, and actually, I think it would also make an amazing quilt. I love the idea of how soft and snuggly the flannel-feel would make it, but how visually fascinating the wool-look would be. 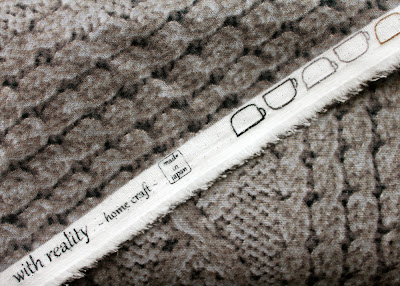 If you'd like to snaffle some up for yourself, you can find them here.

Returning to spiders, apparently the reason we see so many spiders in September is because it's breeding season so the males are frantically looking for a mate. Yes, spider sex...in our houses. If you want to see a really beautifully shot photo sequence of a spider's seduction routine and a very brief explanation of the mating ritual written below it, you can go here - it's not pornographic, doesn't feel voyeuristic and I don't think the spiders shown would scare someone with arachnophobia - my son tells me they're 'just garden spiders'.

Oddly, I used to be arachnophobic, but have somehow become more able to cope with spiders in the last five or six years. I think in part it is watching my little boy with them - I've witnessed him squeal with laughter as he's willingly placed an enormous spider on his own arm and then allowed it to scuttle over his body and inside his clothes. Just like polyester football shirts, when something you've previously found vile bring enormous amounts of joy to your child, an unfathomable maternal instinct overpowers all previous judgements and manages to transform the object into something at least tolerable (although not to such an extent where one entirely takes leave of one's senses: polyester does not come out for meals, go shopping with us, or on days out, but it does sometimes come to the park with us. Nor are spiders cuddled or welcomed into our home by me...but both are now viewed without excessive amounts of fear).

What do you think about reality fabrics? Love them or loathe them? Have you made anything with one?