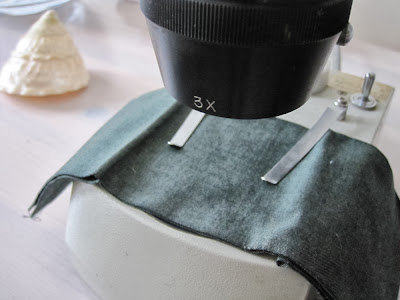 With nothing finished to show you, I thought I'd share with you what I've been up to over the last week. Early one morning, for no apparent reason, I plugged in the microscope that used to belong my father-in-law (and now belongs to my daughter) and looked at some fabrics. It's thrilling to see close up the separate warp and weft strands as they weave in and out of one another. This is an Oakshott, which uses different colours for the warp and weft. 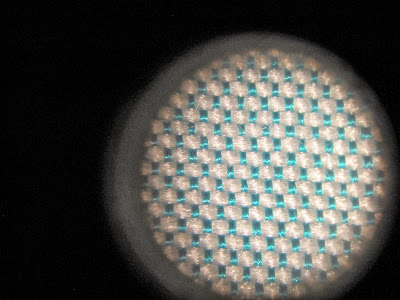 Below is a very narrow striped silk of cream and gold. You can see the paler stripe running at an angle through the centre of this picture. It doesn't matter how many times I do it, looking at things through a microscope is always thrilling, even more so when it's fabric. Only my very basic camera is of a size that allows me to put the lens into the deep eye piece, so these photos don't do justice to the true lustre of the threads, so please imagine them looking much more sparkly. 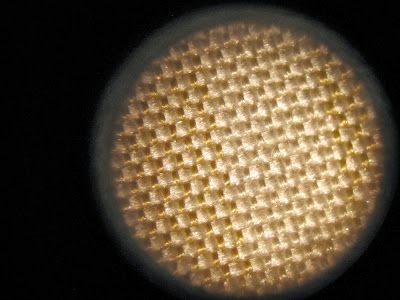 I brought back some silks from the Knitting and Stitching Show at Alexandra Palace the week before last and I've left them out on my chest of drawers so that I can admire them frequently before they're put away. 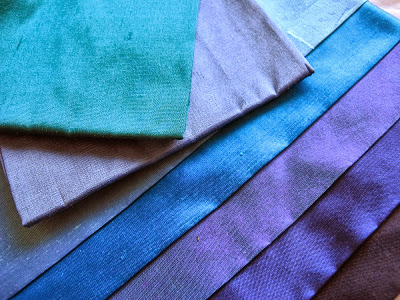 I've been sewing up my Emery Dress piecemeal, literally using blocks of twenty minutes here and there. I never usually work on machine-made things in this way, largely because it necessitates leaving things out and, admittedly, while it's been an effective use of time, it's meant that I've felt slightly stabby to be surrounded by so much untidied mess for five whole days! However, my sewing time has been so scarce that it's the only way to go and despite it being messy, it's come together incredibly quickly, with a nice blob of time to make a bit more progress when my husband was out for an evening on Saturday night. It now just needs the second sleeve attaching and the sleeve and skirt hems taking care of and then it will be done. 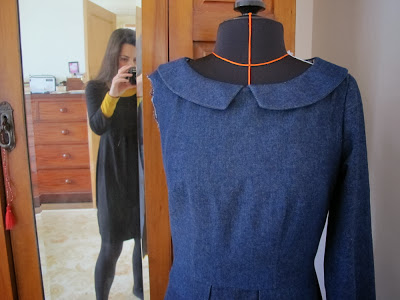 The bodice part of the pattern has been sewn exactly how it came out of the packet (which means that it gets a big thumbs up from me, as it's incredibly rare to find a fitted bodice that fits well on me first time). It actually fits me slightly better than it does on the mannequin in this photo, whose padding around the chest seems to be flattening with use. However, I've made rather drastic changes to the skirt part of the dress (this is what the main focus of Saturday night was about), not because the pattern wasn't perfect, but because the full skirt just didn't suit me when I tried it on. I'll share the details of that when the dress is finished though. 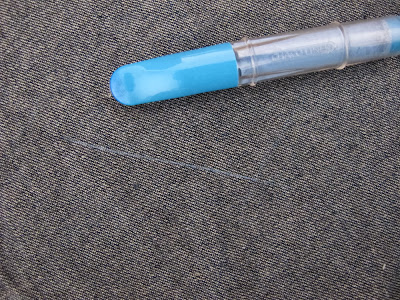 I've been enjoying using the Clover Chaco Liner Pen that Kristin sent me (along with some other amazing goodies, sent as a thank you for my judging stint on the Sew, Mama, Sew Sewing Bee contest) while putting together my Emery Dress. It produces a very fine chalk line, that brushes away easily when you want to get rid of it. It's very similar to the chalk wheels that you can buy at most haberdashers' shops, but it negotiates corners and curves with much more ease as the wheel is smaller than the traditional chalk wheels.

So, on the sewing front the rest of the week holds finishing off the Emery dress and trying to make some progress on my English paper piecing project. What are you up to this week?

In other thoughts, Christmas. I'm unashamed to confess to loving it so much that I like to extend it to take up three quarters of the year and so begin planning gifts in October. I'd like to get my twelve year old (I have to try and type or say this regularly as I can't quite believe that I have a twelve year old) some beading things, so that she can create some necklaces and bracelets. I'm thinking of something a little more advanced than beads on elastic (as I think she would enjoy using wire cutters!), but beading hasn't ever been something that I've dabbled in, other than very briefly as a teenager, so I'm a bit lost by the overwhelming number of books on Amazon. I'd like something stylish and modern-looking - do you happen to have any recommendations?

As a child, my mother would occasionally take me to a bead shop in London's Covent Garden (and then later in Brighton) to look at the rooms full of sparkly or patterned beads sorted into tiny wooden boxes. I've been delighted to find that I think the shop is still there, so me and my husband are planning to take a day off work and go and choose some beads for her at some point between now and December.