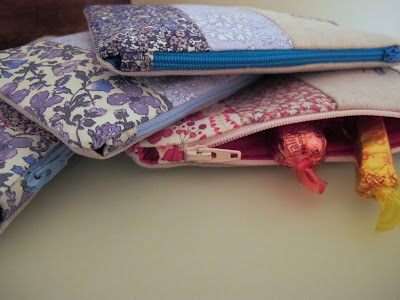 Happy new year! I'd intended to write before now, but time has overtaken me in a delicious blur of sitting around with my family and friends doing very little other than playing board games and being becoming immersed in craft and sewing projects. When not playing board games, my daughter and I have been doing Zentangle doodles (more on those another time), making bracelets (and those) and sewing away on our own individual projects (that's another blog post too), often to a background of chatter (or the distinctive noise of Lego being searched through) with my husband and son, or cosy television watching my and my daughter's viewing tastes meet (the BBC drama of Death Comes to Pemberley - which is the murder mystery follow up to Pride and Prejudice - along with regular doses of Downton and we've even revisited The Waltons, which I can remember watching with my grandmother as a child, as well as watching David Walliams' new film of the book,  Gangsta Granny). It feels like the first Christmas we've had for many years where it has been nothing but total relaxation. The only thing of any event that has happened was a frantic rush to the vets when Nell unexpectedly ate a glass bauble from the Christmas tree, confirming herself as both incredibly silly and very much loved, as we spent the next twenty four hours trailing her around the house and on night-watch waiting to see whether the glass would cause any internal injury - it didn't and she's fine, but I think we all now stroke her floppy, velvety ears with renewed appreciation for her. In my brain-based book of 'Gosh, Dogs are SO Different from Cats', this incident has been recorded in evidence at number 4,379. It seems the list is never-ending and as though I will never cease being amazed by the cat/dog difference. 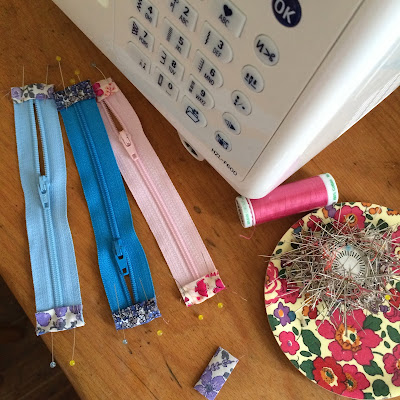 I have so much to write about, but in the brain-fug created by spending days mainlining Prosecco and chocolate, shorter seems better. The photos throughout this post are of my daughter's pre-Christmas sewing. On the weekend before school broke for the holidays, she decided that she wanted to sew little Liberty print purses for a few of her friends to give as Christmas gifts. It took several hours for her just to select the fabrics, cut, iron, and interface them, as well as to embroider her friends' names on each one by hand, so I was beginning to wonder whether I'd let her take on too much. However, I can now really see the wonderful benefit of bulk sewing when learning new skills, as when I went downstairs to make her some food (she was too busy to stop for lunch), on my return, she'd installed the final zip from start to finish, including under-stitching the lining, without any instruction at all - I think it's only by repeating the same process over and over on the previous bags that she had the confidence to do this and a proper understanding of why each step was needed. 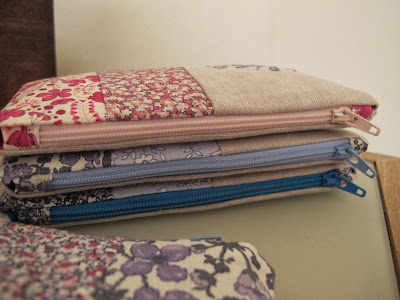 I wanted to avoid any points in making these bags where my daughter would feel the need to ask me to actually sew bits of them for her to get the kind of finish she'd be happy with, so to avoid negotiating the bulk of the zip ends when it came to sewing up the sides of the bags (which I know from feedback to tutorials I've written, can be the bit that people find trickiest), I suggested we make the zips much shorter than I normally would. This worked perfectly and the covered zip ends sit a few millimetres in from each end of the bag, but not so far in that you could actually lose things through the gaps. 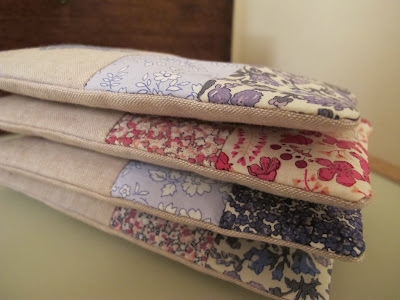 My daughter filled the bags with Quality Street chocolates and took them off to school having spent most of the weekend making them. The photographs aren't terribly good, as she finished them after dark and had to wrap them up before it had got fully light the next morning. 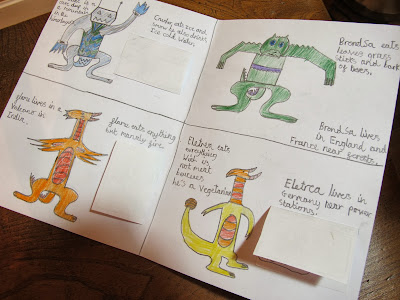 It would feel all wrong to not mention the lovely things my son has made in a start-of-year-post that features my daughter so prominently, so here's the Christmas gift he made for me and my husband this year: a book of Beasts, including lift-the-flap beast stats. This was possibly my favourite present. We loved Eletrea best, purely for the fact that he lives in Germany near power stations, a fact which made us both roar with laughter as we read it on Christmas morning.

I hope you've had a wonderful break too and want to wish you a very happy new year. I'm not really a new year's resolutions type of person - the moment I impose a rule or public aspiration on myself, I feel so overwhelmed by the idea that I might not live up to it that I set about wilfully sabotaging it. So, the only thing that I'm actively setting out to do as I head into 2014, is the rather vacuous pursuit of remembering to moisturise my hands more. Anyone who has taken step photos for a pattern or tutorial involving some hand-sewing and therefore their own hands, will know that this is a stark reminder of the truism that you can tell a person's age by the hands…but that for those who really ignore them you can add twenty years onto that figure.

Do you have any aspirations for the new year?