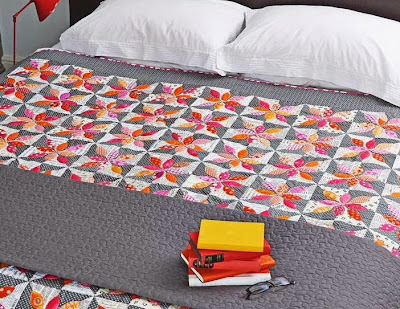 I'm guessing many of you may have already bought a copy of Love Patchwork and Quilting magazine, which is just three issues old (perhaps four in the last day or so) - I've seen so many copies popping up on Instagram. If not, and you haven't yet seen it, it comes from the same publishing house as Mollie Makes, so expectations of loveliness are set high, and it doesn't disappoint - it is truly very lovely indeed.

The photography and layout are beautiful and it's this that makes you feel you're reading something part life-style magazine, part quilting magazine, which is wonderful and feels more in keeping with the style of modern quilting books than quilting magazines often go for. There are also quite a few pages of things that aren't necessarily directly quilt related, but which seem perfectly pitched for a quilt-type personality, if my own response to them was anything to go by - I found some of my children's Christmas presents on these pages and also discovered some new-to-me shops (notably, I Feel Smug) that sell delicious stationery and other unnecessary but beautiful items. 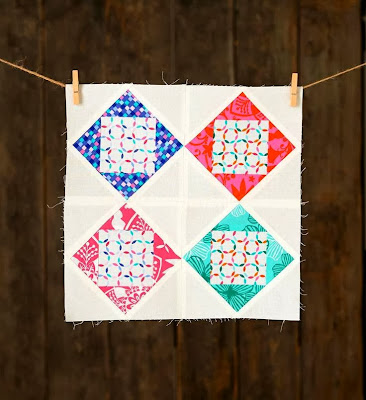 But down to the actual quiltyness. I completely fell in love with Brioni's quilt which featured in issue 2 and which is pictured at the top of this post. There was also an amazing supplement (I can't remember which issue this came with as they've all become separated from one another) by Tula Pink, created with Love Patchwork and Quilting. I was delighted by this as I've become quite obsessed by looking at blocks on Instagram made using Tula Pink's fabrics - especially the blocks featuring racoons - using patterns from one of her books, where each page has a block of an identical size to the one being made, so that you can actually store your blocks between the pages as you make the sampler quilt - I don't know why, but the idea of having quilt blocks perfectly matching up with those in the pages of a book is a really pleasing one. Other highlights of the magazine are the pages which cover new fabric ranges, interviews with fabric designers and shop owners and then regular features, such as Block of the Month, which not only shows you how to make the block, but shows you how it would look as a wallhanging or quilt if you repeated the same block, rather than incorporating it into a sampler quilt. The techniques section, which covers basics like how to bind a quilt in every issue, means that the magazine will appeal to new quilters, without making more experienced ones feel bogged down by instructions they may not need. 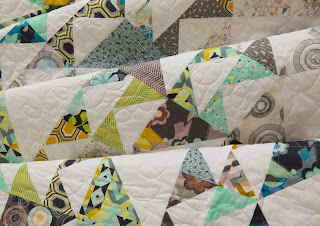 Overall, it just feels so crisp, clean and modern. I'm so delighted that there's such a wonderful home-grown English quilting magazine on the shelves of WH Smiths, that holds the same lure for me as the wonderful American, Australian, French and Japanese quilt magazines have done in the past, but without the disappointment of them being full of non-local advertisers or even written in languages which I can't actually read. I have a few pieces coming up in future issues of the magazine, so I'll let you know when they come out. 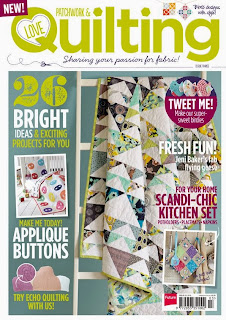 If you haven't already laid your hands on a copy, Love Patchwork & Quilting kindly sent me two copies of Issue 3 - one for me, one for you! Just comment on this post for a chance to win it - I'm happy to post internationally.

And have you noticed that I've had a bit of a blog overhaul? I've been meaning to do this for a long time as I've had the same colours (various shades of pink) since I first started writing my blog seven years ago. It feels so nice to start the new year with the blogging equivalent of a new notepad. I had fun creating a Pinterest board of potential colour palettes and then mocking up blog pages in Fireworks seeing how things looked before setting them live on my blog. The first design I settled on was actually a very dark teal and a sober olive colour, which I loved, but which looked a bit too heavy with the photos I tend to post and with my sponsors' logos, so I changed it to something lighter instead. It did make me realise though, that there may be a reason why I'd stayed with pink for so long - it's one of those rare colours that goes with nearly everything other than mustard and navy blue.

PS. The photos throughout this post are taken from the pages of Love Quilting & Patchwork Magazine - they're created by the nimble fingers of Brioni Greenberg, Lynne Goldsworthy and Jeni Baker.