The circle of fabric buying indecision 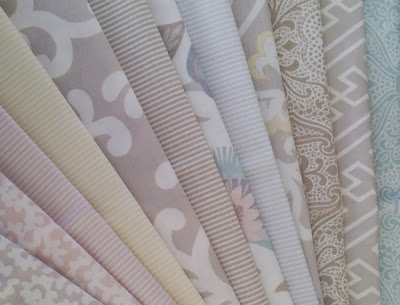 Just before Christmas, a box of fabric goodness arrived from Dear Stella containing some fabrics for a few pieces that I'm currently working on for a magazine (I'm so looking forward to sharing those with you once it's out in a few months time), but there were also some unexpected extra treats in there, namely this Vanity Fair fat quarter bundle, which was serendipitous as I've been putting this collection in and out of an online shopping basket ever since I first saw it on Instagram. I'm usually a painfully indecisive shopper when I'm making purchases anyway, so making an overseas purchase (which also involves extended delayed gratification and potential customs charges) is normally precipitated by weeks of strokey beard moments before finally taking the plunge. 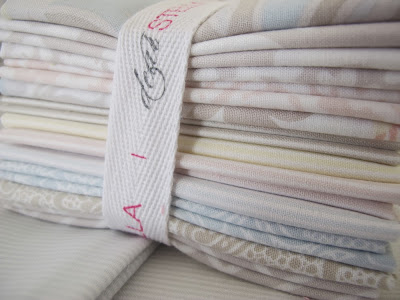 My thought process went something like this: It's so beautiful, soft and elegant; but what if it is insipid and too pale when it arrives? I will cure my worries by searching for every photo of the collection on the entire internet to assess whether the colours are as perfect as I think they are; I have found some, I think it really is perfect - every photo of it makes me love it more; but it's so new that I cannot find anything to look at that's actually finished - I want to see lots of examples in lots of different lights of it all sewn together, maybe I should wait until I can see more of its loveliness in action….and on and on and on. Thankfully, I only enter The Circle of Fabric Buying Indecision very rarely, because most of the time I just avoid looking. When my husband notices that I'm browsing online fabric shops with a glazed, slightly pained expression he says simplistic things like: I can't understand why you procrastinate when you're so lucky to be able to buy something that you love that only costs £30…to get the equivalent amount of joy in guitar terms I would have to spend over £2000. He doesn't see that if I bought all the fabric that I wanted on that basis, it would amount to far in excess of £2000, so this kind of mental torment is entirely necessary to hone the list of wantiness to an acceptable level. 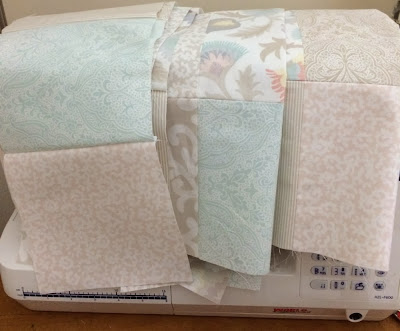 Serendipity, freaky intuition on the part of the lovelies at Dear Stella, whatever, a fat quarter stack of this found its way to me before my research consumed me further. And it is so perfect. My first thought was a wall hanging, because the prints in this would work so well on a small scale and the lace print would look fantastic being fussy cut. However, I happened to put the bundle down on our bed and realised that I'd finally found something that I've been looking for for over five years. I love white bed linen so much that, apart from the very boring white quilt I made several years ago (which I now feel doesn't actually count as a quilt because it is so dull), we don't have a made-by-me quilt for our room. The idea of introducing colours and prints into a space that I enjoy being completely neutral and calm has never appealed…but Vanity Fair offers colour and print in a way that feels as though it doesn't detract from the feeling of calm at all. I am in love.

The sewing I'd planned to do over Christmas was delayed by another package I'd needed to go with it not arriving, which meant that I was free to cut into the Vanity Fair straight away. I wanted to make something simple, where the main focus was the quilting - partly, because I liked how I imagined that would look and partly because I wanted to spend Christmas with my family rather than my sewing machine, so setting up a quick project that was then ready for hours of sociable hand-quilting really appealed (a non-sewing Christmas wasn't an option that occurred to me. There are times when I don't sew, but it actually makes my fingers itch to think of watching a film without sewing at the same time). I used all the prints in the bundle apart from the yellow stripe - I've no idea why, as it works with the rest of the collection perfectly, but I just preferred the colours without it. For reference, if you've arrived here in your own Circle of Fabric Buying Indecision, I'd say that the top two photos in this post show the colours in a truer light - it rained all day, every day over the holidays, so the other photos are mostly taken in artificial light, which gives the colours a tone that is less fresh than the reality. 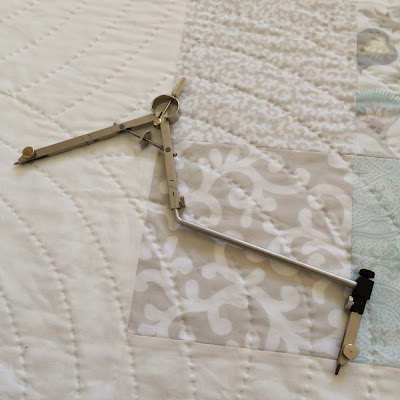 This was also an excuse to get out the completely dreamy compass that my husband gave me as a birthday gift a few years ago. I love this compass as it feels so beautifully designed and I can draw absolutely enormous circles with it as it has an extension arm. To make a quilting guide for this, I used some clear template plastic and drew curves on it an inch apart, before slicing them open with a scalpel to allow me to run a disappearing-ink marker pen through it onto the fabric.

I'm now half-way through hand-quilting this king-sized beast and have had to put it to one side as I have a few other projects that I need to finish, but I am so excited to get time to work on it again, as I can't wait to have it on our bed.

I'd love to know if any of you go through similar indecision and dilemma when buying fabric or if you have a fabric buying strategy to work around it…and if you shop on impulse how do you not just buy everything?

P.s. If you're interested in putting some Vanity Fair in and out of your own shopping basket, you can find it here. However, I can wholeheartedly attest to its loveliness.