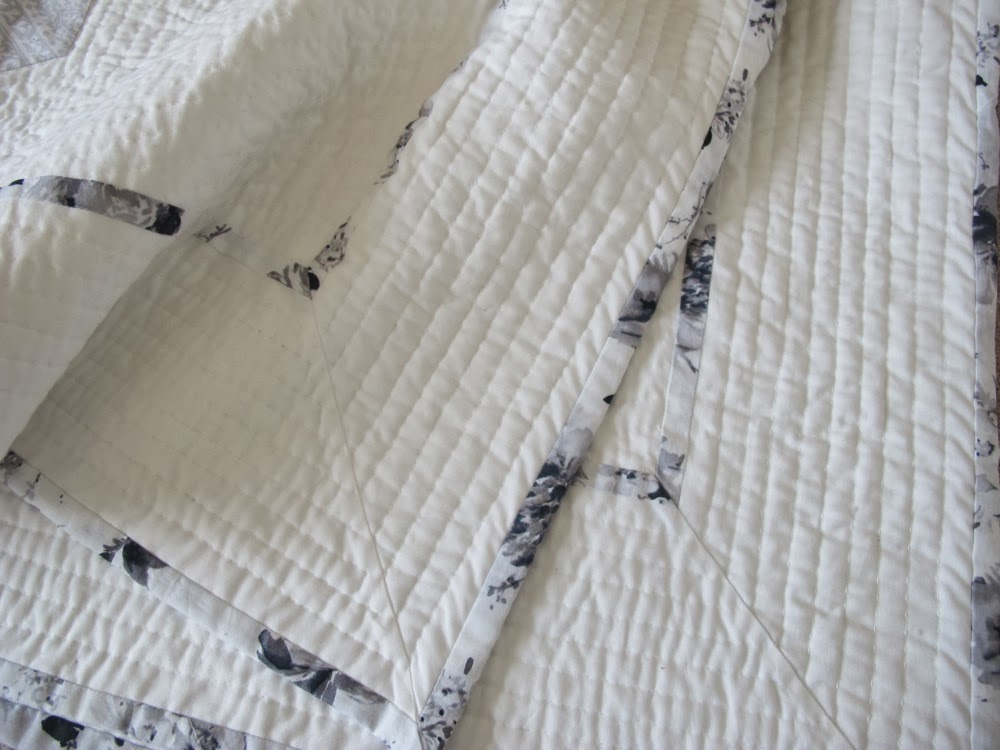 I've finally finished a quilt that I've been working on, in tandem with a few other things, since Christmas. Unfortunately, I can't show you all of it quite yet, as it's going to appear in a future issue of Love Patchwork & Quilting magazine, but I thought I might share a few photos of the borders and binding.

This quilt is entirely made by hand - it combines English paper piecing, appliqué and a complete self-indulgence of hand-quilting! A self-indulgence because I could have quilted this in a day on the machine, but since I hand-quilted my daughter's quilt I find it hard to forgo the bobbly puffiness that quilting by hand gives - it's just so incredibly tactile, irrespective of imperfect stitches and wonky lines. 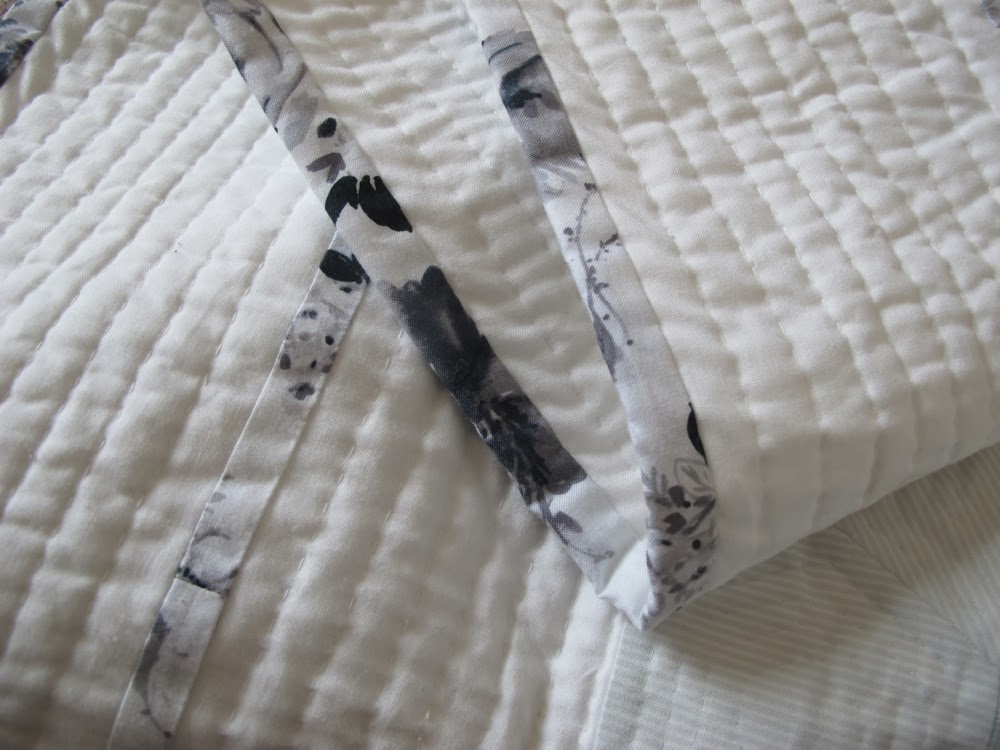 Every time I embark on a project like this, half way through I begin to question (and chastise myself for) my curious compulsion to take the long road, but it's such a good feeling when it's finally finished. I was talking to my husband about this last night: he says that when he gets to the end of coding one of our educational Squeebles apps, he looks over his work and the realisation that he's written over ten thousand lines of code brings an odd sense of detachment. I know what he means - it's as though an alter-ego has been working on your behalf, because by the end, you can't quite believe that you have possessed the perseverance to return to chipping away at the same thing each day. 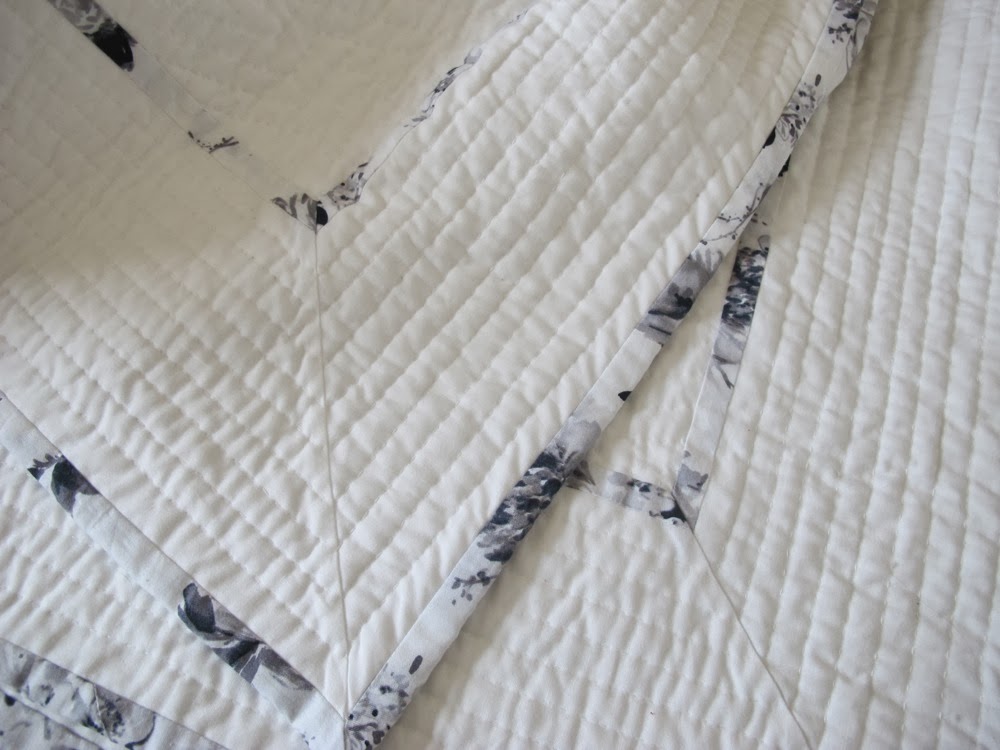 Perseverance is an odd thing. When I see those people who occasionally appear on Grand Designs, who literally build or rebuild their own houses, repointing the bricks of an entire water tower the size of an aircraft hanger, in a blizzard in the middle of winter with a broken arm and seemingly only their chest hair for warmth, I've often wondered where they find the inner strength not to be crushed by the enormity of the task. It feels like a really good lesson in perseverance to undertake long-term projects every now and then (although obviously on a much smaller scale than the aforementioned water tower) that reinforce the idea that chipping away at something really does eventually mean something will be finished. I think I have to pick my lessons though, as it only feels like a good lesson if it's enjoyable - I've realised recently that same-block quilts are almost an impossibility for me - whereas I find the chipping of hand-quilting a quilt really enjoyable, chipping away at this snowball quilt very nearly made me throw the quilt out of the window - I'm really not sure that I enjoyed it at all as I didn't find the repetitive sew, cut, press actions peaceful in the way that many others seem to. Which makes me think that a sampler quilt, which involves putting together lots of different blocks, may be the perfect thing for me. I'd quite like to start on one of those at some point soon. Do you have any recommendations? Jen Kingwell's Green Tea and Sweet Beans is a pattern that seems to have a pull, not least because so much of it can be done by hand.

Finally, let's talk about lavendery colours. I mentioned this on Instagram last week. For the last ten years I've just loathed any shade of purple, to the point where I haven't even acknowledged its existence because it's just not even on my radar as being part of the usable colour spectrum, so I've found it slightly unnerving that I'm suddenly starting to look at lavender-hued fabrics and feeling all wanty. When I saw Oh Fransson's Love Triangle quilt last week on Instagram I actually had palpitations I loved it so much - do go and have a look - it's an amazing quilt and the photos of it are stunning (you can find the pattern for it here, if it has a similar effect on you). 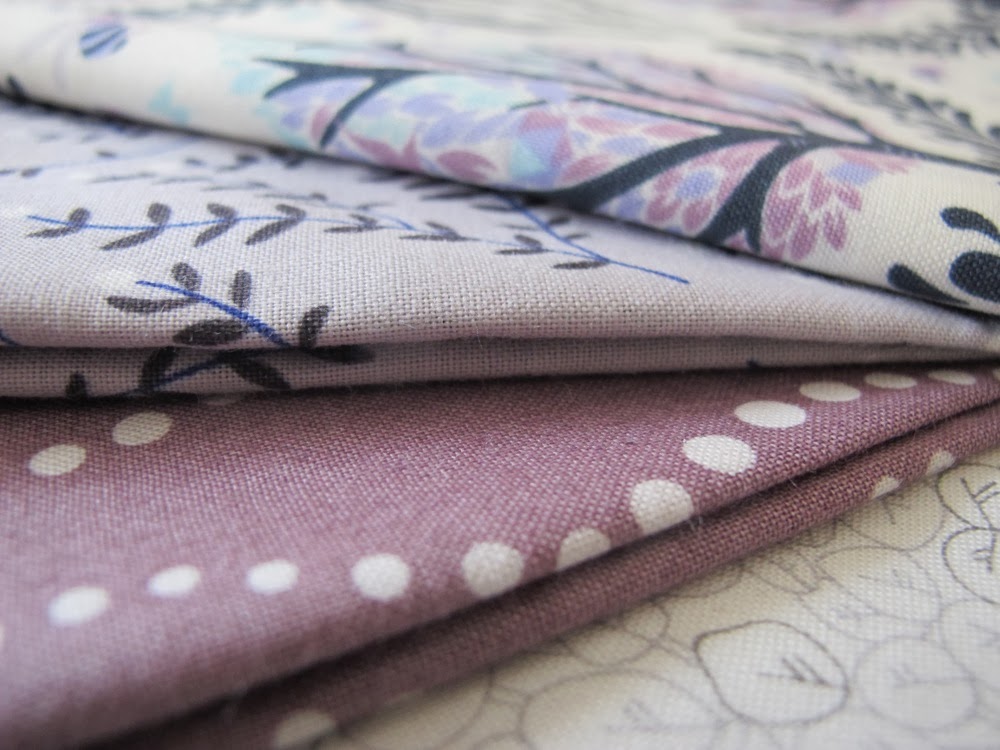 I actually even ordered a few fabrics in this shade. I had to remove two of them (not pictured) on arrival as they made me feel slightly cringeful, so I'm not sure I'm yet entirely accepting of it, however, I'm wondering whether that's because it needs some really bright pinks and fresh whites mixing in, as with the Oh Fransson quilt, to make it palatable. What are your thoughts on this colour? I'm wondering if it's a generational thing, as I think so many people of my age had either lilac or peach decorated bedrooms as teenagers, that it's perhaps difficult to easily reintroduce these colours that seem like throwback-to-the-nineties shades…however, looking at my blog header I seem to have managed to re-embrace peachy tones, so perhaps it will happen with purpley ones too.