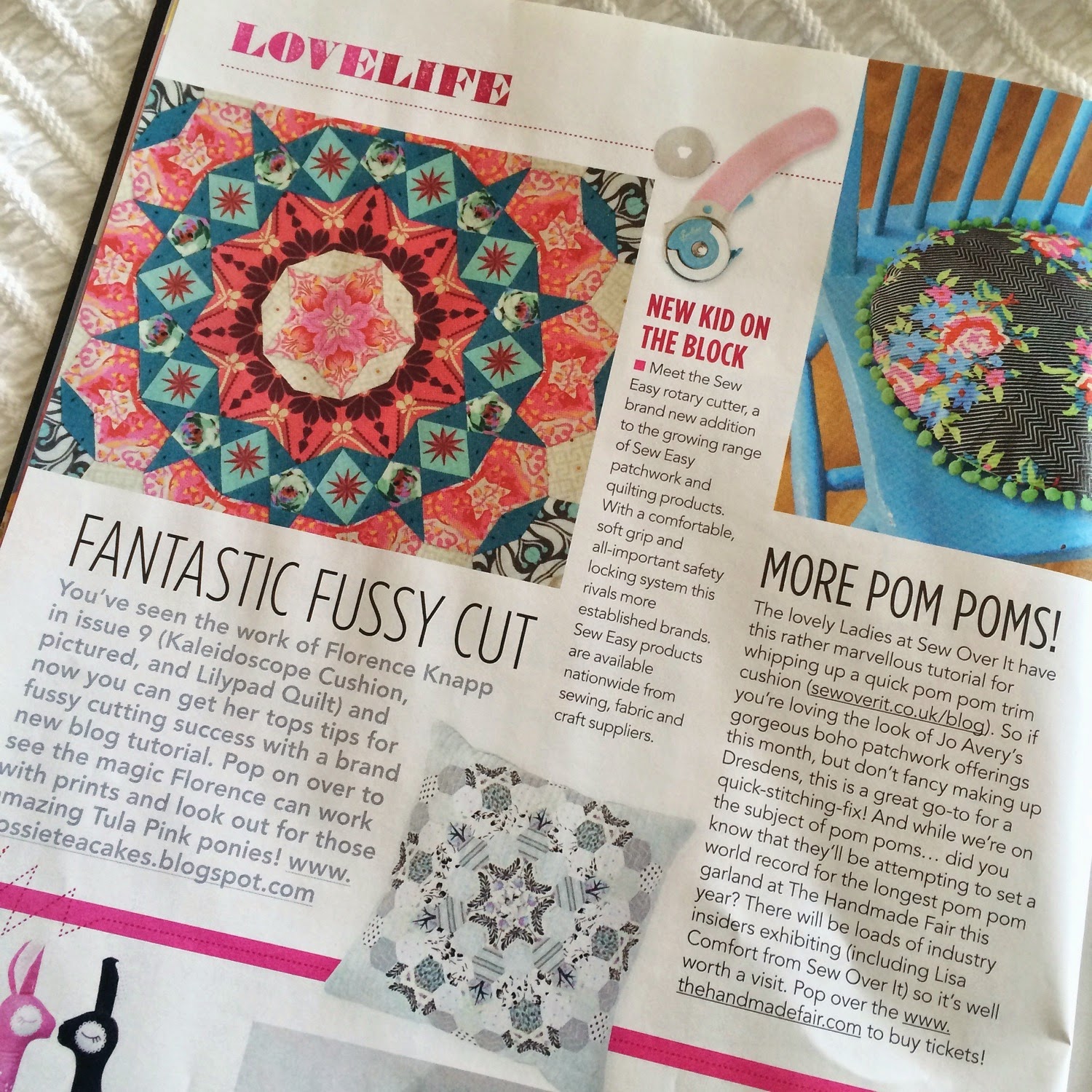 Just a very quick (edited: it didn't end up being so very quick after all) post to say that the new issue of Love Patchwork and Quilting is out now. I'm so pleased to have my fussy cutting featured in their Love Life pages as these are always the pages I turn to first, so it feels incredibly lovely to have my own work in there! Admittedly, these pages are actually right near the front of the magazine, but if they were near the back, they'd still be my first port of call! I've discovered so many good things in those pages. 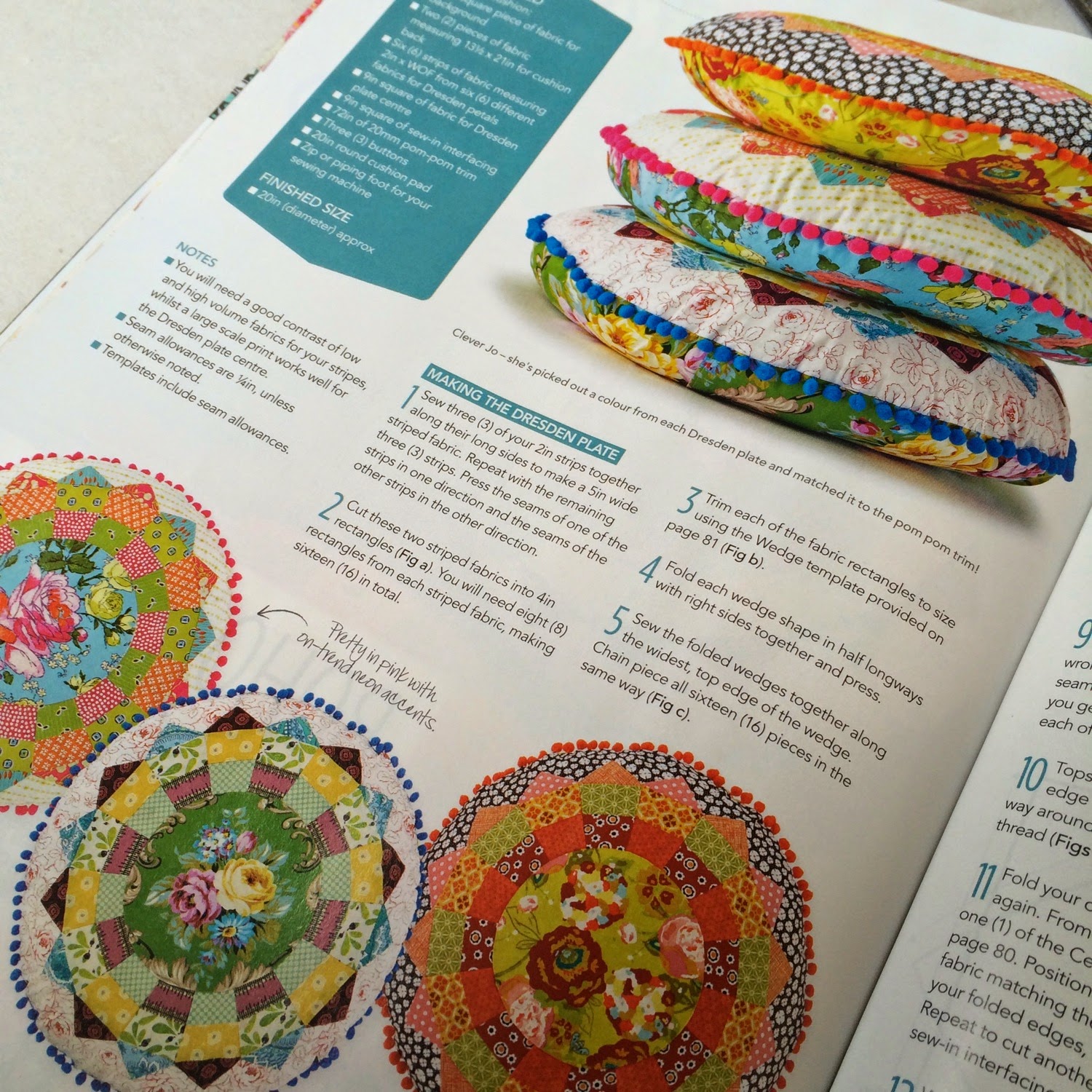 As always it's a really good issue. I've fallen in love with Jo Avery's cushions and I'm tempted to make some for my sewing room once it's finished, which doesn't seem so very far away! We have now have a fully waterproof roof, shiny new windows and finally, today, a staircase, which feels hugely exciting! More on that in my next post…but I can't believe quite how much has been achieved in less than three weeks! In the time it's taken our carpenters to build the shell of an entire loft and install a new central heating system, I've managed to sew just one more cogwheel for my Passacaglia Quilt (more on that next time too!)…I'm not sure what to make of that apart from: Goodness, I am SLOW!

Although in fairness, we've worked so hard over the last few weeks, that by the time the evening has come, some nights I've just fallen in to bed, unable to do another thing. We've just released a new Squeebles app! If you have primary school aged children, you might like to read more about our latest educational app, Squeebles Maths Race, here or watch a demo video of the app here (listening to your own voice is always a traumatic experience, isn't it. I asked my daughter whether I actually sound like me. Disturbingly, she said that I do).

Anyway, the fact that I sound like a boy aside, it's an app that I feel really proud of. With all of our apps we agonise over how to get it just right so that it challenges more able children, yet encourages younger or less able children. To date, we've always avoided any element of competition in our apps because, in general, learning feels like something that should be done at a child's own pace to be enjoyable. However, a lot of teachers and parents have told us that for some children competition is actually hugely motivating. So, in the background to the other apps we've been creating over the past year, we've also been discussing how to make this happen. We finally came up with what is now Squeebles Maths Race. It's a one or two player game and in two-player mode, the app allows two children of very different ability levels or ages to have a fair race against one another, because each child races to the finish line answering maths questions tailored to just the right level for them. In this way, two siblings can have a completely fair race where they both have an equal chance of winning. We've played this a lot with our own children while we were trialling the app and so I can also say it's great for parents to play against their own children too…although speedy mental arithmetic has never been my forte, so the disparity between our playing levels isn't quite as great as it could be! It's our first app that allows two children to use one device at the same time - touch screen technology is perfect for this! As always, our apps are entirely self-contained: they have no in app purchases, no public leader boards, third party advertising or links off to the app store.

While we're on the subject of apps, the non-Squeebles app that features most predominantly in my own life is Apple's own podcast app. I subscribe to everything from Radio 4's Woman's Hour and Desert Island Discs podcasts to Richard & Judy's Book Club discussions; TED talks to Thread Cult (the latter offers wonderful podcasts about sewing and textiles). It's revolutionised those days when I seem to spend all afternoon walking to and from different places to drop the children off or when I repeatedly forget to buy things from the supermarket - I now relish the idea of a walk alone. They're also great to sew to though as they're completely engaging, yet don't require you to watch anything. I love that I can now listen to all my favourite programmes at a time that's convenient to me. Do you listen to podcasts? Do you have any on your list that you'd recommend?