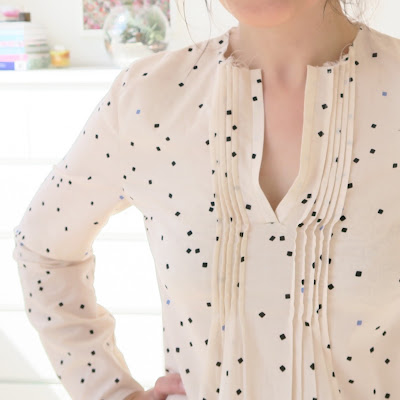 My darlings, today, I offer up a cautionary tale about following your instincts and not pressing things like a wild boar when your snout is twitching alarmingly with an unusual sense of vigilance.

For several months, while working on quilt-related projects, I have had a sense that my iron may be overheating and working as a lone agent, blithely disregarding any heat settings that I tried to impress upon it. At times, I had been surprised by how sharply something had been pressed; by the slightly piquant scent that a fabric had produced under its soleplate; or by the brief untouchable heat of some cotton directly after pressing, in my normally asbestos-proof hands. But, for some reason, I chose to remain blind to the extent of my iron's independent spirit, because that would mean buying a new one. Or using the general household iron for my sewing, which is all the way downstairs and which has never come into contact with fusible interfacing or Bondaweb, and so is pristine.

However, right at the start of my most recent dressmaking marathon (which has now come to a halt due to work commitments, but as I was so briefly prolific, I still have many garments to show you that were made during that stint), I made the unfinished top which appears at the top of this post, at which point I was made more fully aware of my iron's behaviour. Whilst for machine quilting, I use cotton thread, for dressmaking, I favour polyester thread, as it's stronger and more willing to give a little under the strain of one throwing impromptu body shapes...or just reaching for a packet of pasta from a high shelf. When I had sewn the pin tucks on this shirt, not wanting to erase my heat-sensitive markings for the placket, I had finger-pressed them into place, before constructing the placket. Placket completed, I had given it a firm pressing, before continuing on with installing the sleeves.

However, just before sewing the binding to the cuffs and neck, I decided to try the garment on. I am, admittedly, often label-intolerant, but even for me, I was surprised to be feeling so princess-and-the-pea about what had appeared to be a simple, soft cotton when handled. While it feels inappropriate to even type this word, I think it's necessary to convey the full extent of my discomfort. There was chafing. It felt like a plain cotton top constructed by own hand was inexplicably chafing and scratching my chest. With claws. And I had no idea why. Even more shockingly, as I took it back off over my head, I could hear the unmistakable sound of stitches splitting. 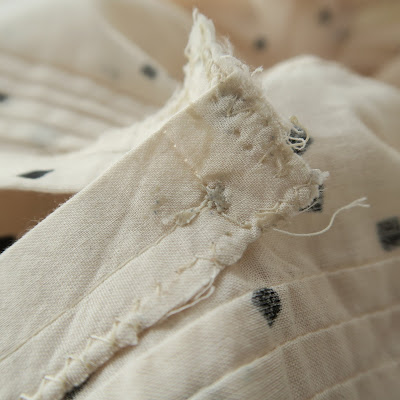 When I turned the top wrong-side-out to look at what the source of the abrading might be, I saw what you can see in the photo above. For a moment, I couldn't understand quite what had happened, but let's walk through the molten devastation that my iron had left behind on the shirt placket. If you look at the raw edges, you'll see that where there were once fully-formed zig-zag stitches*, there are now just the broken traces of stitches that have been sizzled away. Where stitches had once been neatly locked in place with some careful backwards and forwardsing, there now sits unsightly baubles of smelted polyester. Threads hang loose, where stitches have split. To touch, the remaining stitches are more like brittle staples, than a soft, fine thread. There is devastation inside this top.

I never really believed people when they said that polyester thread can melt at high temperatures. I have spent a lifetime ironing both handmade and shop bought clothing with wild-boar-enthusiasm (to be clear though, because this does need clarifying when making such a statement: I have never pressed creases in my jeans) and nothing has ever come close to melting. But I see now that I was wrong to be so carefree. With an iron that reaches extreme temperatures, all things are possible.

On the positive, this top was the wrong style for this fabric: it didn't drape nicely and between bust and backside created the dreaded lampshade effect, where I really aspired to an egg-timer (of the traditional sand-filled variety). So the trauma of the over-zealous iron feels easy enough to move on from and thank goodness that it revealed its true nature during the making of a top that would ultimately have sat at the back of my wardrobe had it been completed without disintegrating.

* I made the top with french seams throughout, so it felt too tiresome to drag the overlocker out of hibernation just for a placket, hence the zig-zags.
Email Post