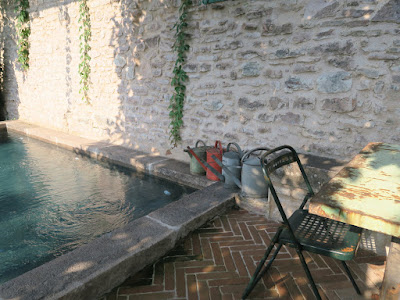 Being a cautious sort, I never discuss holidays until after I'm safely home, as mentioning it beforehand would feel like handing out party invitations to burglars and then worrying over whether anyone would turn up.

In contrast to the last few years, where we've just managed four days away somewhere in England, this summer we fitted in two longer holidays. One in Winchelsea and then another in Italy, where I spent a considerable amount of time sitting against the brick wall reading, while dangling my feet in the pool to keep cool in the 36 degree heat. 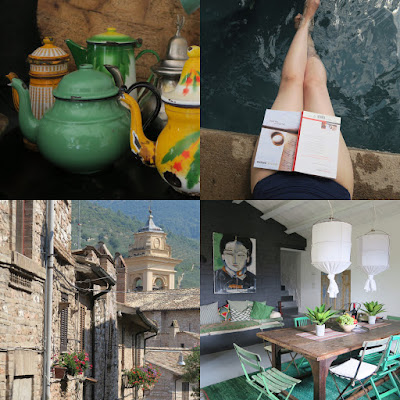 We stayed in a beautiful house, where each room had a different colour theme, which was deliciously bonkers and my idea of heaven. Even my husband, who normally reacts against this kind of styling, found the use of colour fascinating and as we lay in bed or lounged on the sofa we couldn't help but absorb something of an education in colour-use as we noticed all the thoughtful details that had gone into putting the rooms together. It was really lovely. We also fell in love with the small town, Spello, where we stayed, full of beautiful, narrow, hilly streets; wonderful restaurants; really friendly locals; amazing gelato; incredible views; and plenty of churches to sit in and admire the ceilings of. We took the train to another town on one of the days and a taxi to Assisi on a different day. And we finished up by spending a night in Perugia, where the highlight was walking in to this beautiful building and sitting to listen to an incredibly talented youth orchestra practising for a performance that evening. Quite magical. 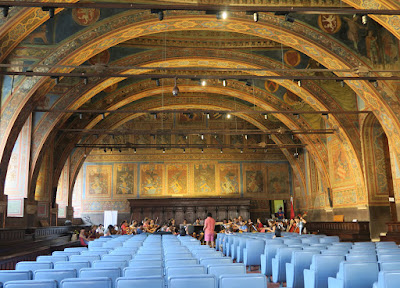 My poolside reading was Graham Greene's The End of the Affair; Plainsong by Kent Haruf; and I'm still currently reading The French Lieutenant's Woman by John Fowles. I only got half way through reading All My Puny Sorrows by Miriam Toews before deciding that although it was brilliant, it was too downbeat so I abandoned it, to return to at a later date. I also read Summer Sisters by Judy Blume, which my sister bought me as a holiday gift and it was perfect - I'm not sure whether it's to do with reading requirements subtly changing for a holiday or whether it's because life feels a bit boggy and hard in places at the moment and so I feel averse to reading anything too weighty, but when I read the Judy Blume I realised how much I was craving something with a bit more lightness and moments of joy in it and that it was a perfect holiday read. Once I was home, I packaged it up and sent it on to Spain where my sister was on a yoga retreat...but I'm unsure who will end up getting to read it as it's still yet to arrive and my sister is now back in England. I hope someone opens it and enjoys it and forgives me for resting the the book on my stomach to read while wearing a slightly damp post-swim bathing costume and so leaving the pages looking slightly wrinkly. 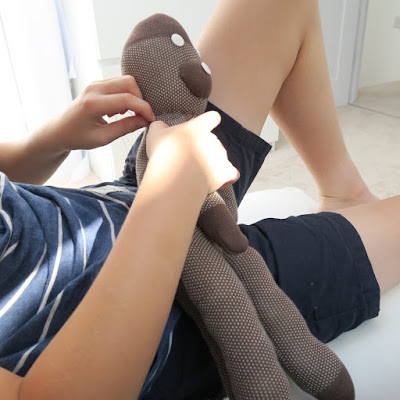 Now that we're home, we've been spending the last days of the summer holidays seeing friends, baking and both of my children have also been sewing sock monkeys, which are very joyful creatures. We have been amused that although each monkey starts off with an identically sized sock, the finished size varies hugely depending on the personality of the maker. I'll show you the finished monkeys in a different post as one of them still needs ears.

Karen from Did You Make That? has launched a sewing pledge drive in aid of The National Literacy Trust and, at the time of writing, the fund has already exceeded its target at 215% of the initial amount having been met. While I'm not overly committed to pledging to make something (I have a freaky aversion to deadlines, even self-imposed ones, so I chose something that's not truly a sewing project and that I'm making lots of at the moment anyway - more on that in another post!), it seemed a really good excuse to make a donation as I do feel absolutely passionate about childhood literacy and have seen firsthand the incredible difference that can be made to a child's outcomes when they have access to the right support.

I hope you've had a lovely, sunshiny August,
Florence x

Ps. Head over to Quilt Now for a feature on different basting methods for EPP.
Email Post