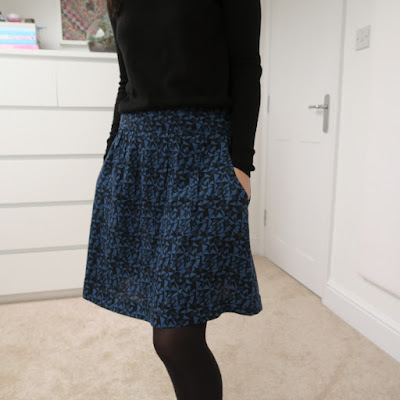 I'm trying to remember the last time that I sewed something that wasn't a rope bowl and I think it may have been early August. A friend asked me recently what would happen if I didn't sew soon. The very fact that she asked probably suggested I looked close to the edge. But a mixture of work; not feeling quite like being pulled away from time with my family or friends in favour of sewing; and horrendous insomnia, colluded to mean that I just haven't had the time or the energy to sew in the evenings. What eventually propelled me into action was a gap in my winter wardrobe that needed filling. And sewing is a virtuous circle - the moment I started I felt more energised than I had done for months. 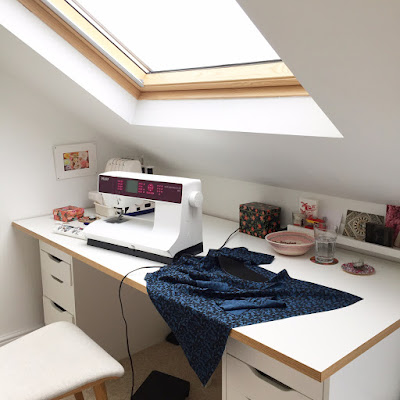 I took the photo above just before I began sewing - I think the excitement in the room is almost palpable! 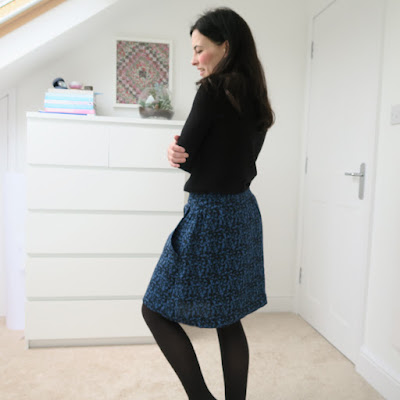 It was a super cosy sewing session as it was pouring down outside, my daughter was doing her homework in the next room and we played our three current-favourite songs on repeat for a few hours. Because the loft is so small, listening to music up there always feels more companionable than it would elsewhere in the house. When she'd finished homeworking, my daughter wondered what we might have for dinner. And I realised how deliciously lovely it is to have a fourteen-year-old, because when I half-jokingly told her that her mother was too busy making skirts to make dinner tonight, she offered to cook something for us both and insisted on delivering it to my sewing room, so that I could have the fun of not stopping to come and eat at the table. I'd thought, with my youngest starting at secondary school, I'd find not having any children left at primary school this year a difficult mental transition, but actually it hasn't been that at all and I'm really enjoying their independence and just how much fun they are to be around. 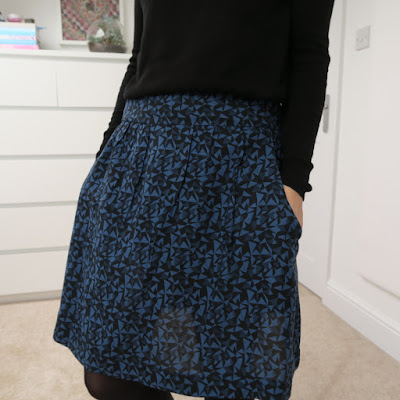 So, the skirt. I knew that I wanted a light, gathered skirt to wear with winter tights like this one, but with a slightly longer hem line. I considered a simple skirt with an elasticated waist, but they can sometimes make me feel like a strange woman-baby when I wear them (even though the elastic is invariably hidden beneath a jumper), so in the end, I opted to draft a skirt with a curved yoke, side zip and gentle gathers front and back beneath the yoke. I studied the measurements of the waist bands and sweeps (the circumference of the hem) on various skirts that I already own for reference. As it was a fairly inaccurate science that I used for the drafting, I felt really pleased that the fit is pretty much perfect after pinching half an inch out of the waistband. The skirt is an a-line shape, although because of the lovely floppy material, it doesn't announce it's 'A' shape overtly, which I'm pleased about. It also has pockets. Does anyone else suffer from an unwillingness to support the weight of their own hands? I'd quite like a pot to put them in when they're not needed for anything. I think if I don't have pockets, I'm an ideal candidate for a hand muff. 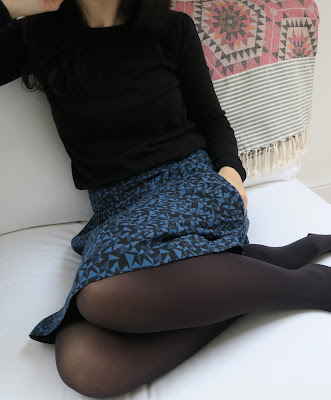 The fabric is an Atelier Brunette Viscose and it feels like the perfect weight and drape for this skirt. It's not completely opaque, but that feels fine with black tights. If you order any, brace yourself for it not to feel very lovely straight off the bolt, however, as soon as it's been washed and dried, it feels like a completely different fabric. This is especially true of the fabric samples to the far left and far right in the photo below, however, the fabric sample in the middle retained its stiffness, I think because there's so much black printing ink used to colour the bluish base-cloth (which is just as soft to touch as the other fabrics on its wrong side). I'm wondering if this may soften with another washing and if it does, I'll report back. If not, I'd possibly still buy some (just because I love the print so much) but brace myself for it being a skirt that stands slightly prouder from the body. 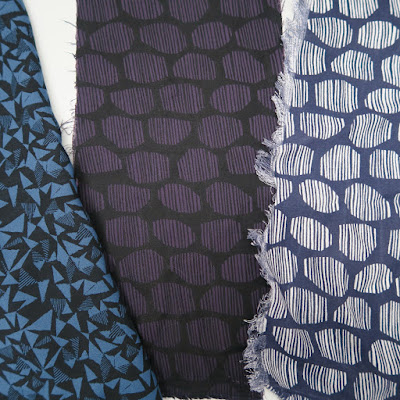 Weirdly, after not wearing a single skirt or dress for the whole of last year, I can think of only three occasions that jeans have made their way out of my cupboard since the start of Autumn and I've even worn dresses for walking the dog (although maybe that will change as the weather becomes wetter). It's funny how differently we feel about clothes from year to year. Consequently, that means that there's room in my life for many more of these skirts. I used just under a metre of fabric, so the total making cost ended up being around £15 (£18 if you include postage costs, which for self-delusion purposes, I don't). It really thrills me how inexpensive dressmaking is when compared to quilting - a handmade quilt will often cost two or three times that of a shop-bought quilt, but clothing invariably costs far less.

While on the topic of quilts, several years ago I made a quilt for my husband, but he's barely used it [waaaahhhh] as the flannel that I backed it with feels stiff and not conducive to wanting to snuggle under. I'd always thought flannel would have perfect snugglability qualities, but for whatever reason, in practice the quilt is surprisingly unyielding, in spite of repeated washing in an attempt to soften it. I'd quite like to attempt Husband Quilt II (aka the usable version) at some point, but I'm stumped by what to back it with. I don't want to use Minky as that doesn't feel quite right for a man-quilt. Any ideas of what fabric might be suitable? Have you made a flannel quilt that does feel snuggly? Maybe with a different brand of flannel?

And back to dressmaking: are you planning to make any clothes for the new season?