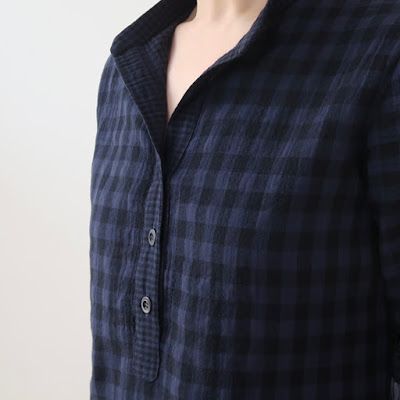 I cut this shirt out last year and then found that the weather changed, causing my spring/summer dressmaking bug to finally desert me. I always remember a woman who worked in my local fabric shop several years ago telling me, with a look of complete mistrust and suspicion on her face: Quilters are weird. They're here constantly all winter and then in the summer they just disappear and nobody knows where the go or what they're actually doing. The implication seemed to be that they could actually be off murdering people for all she knew, only to reappear in September ready to absolve themselves of their crimes by indulging in some gentle needlework.

I was actually buying dressmaking fabric at the time, so she wasn't aware that I also quilt, but inwardly I was amused to be one of the weird breed of quilters who, like migratory birds, change where they're headed the moment the weather warms up. But rather than going on a killing spree, this quilter at least, is just dressmaking. The wish to make clothes in late spring and early summer hits me every year and has little to do with any particular logic or rationale related to a summer wardrobe, but feels more like a gravitational pull. Although, my English paper piecing continues regardless of the season. 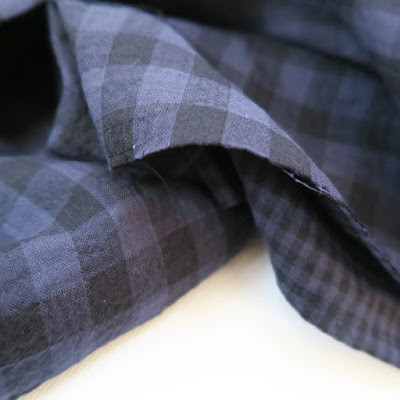 Anyway, returning to my most recent make, this shirt is made from a quite extraordinary fabric. It's a double gauze with a large check on one side and a much smaller check on the other face. But it's softer than a Nani Iro double gauze and also has a slightly puffy feel to it reminiscent of a seersucker. I really, really like it. I haven't spotted it in a single online shop though, so unfortunately, I have nowhere to point people for a source of it - do let me know if you know of one. I've lightened the above photo up quite a bit, as its one downside is that it's a beast to photograph. I bought enough yardage to make a shirt and a skirt (not to be worn at the same time!), but sadly I was trialling an extremely fancy pants iron out for a manufacturer on my initial attempt to make this last year...and found that the pants on that particular iron weren't quite fancy enough as it suddenly sprayed a trail of white and brown debris all over the shirt which proved to be indelible, so the fabric set aside for a skirt had to be cut into when it came to remaking the shirt. If I was given a penny for all the iron-related traumas I've experienced now, I would have enough to buy myself a very large ice-cream, possibly with a flake. (Actually, I was sent an electric toothbrush by way of apology, so I fared rather better than being given the ice-cream and it was also quite nice to come to the shirt afresh this summer and found that I'd already cut all the pieces out, so that I could get straight on to the fun part). 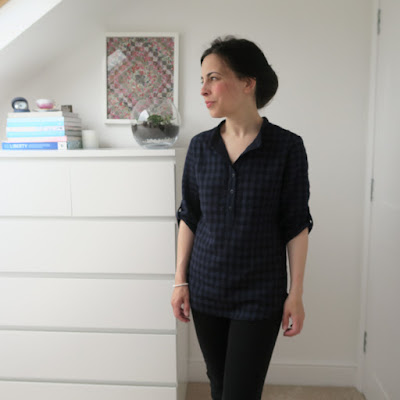 It's shown far better in the photo at the top of this post, but I was able to use the contrasting smaller check side to make the button placket, shirt sleeve hoikers (what's the official word for those?) and collar and it's a really nice feature to have the check peeking out from inside where the collar falls down. As I said earlier - I found that it's virtually impossible to photograph it so that the print shows up clearly. 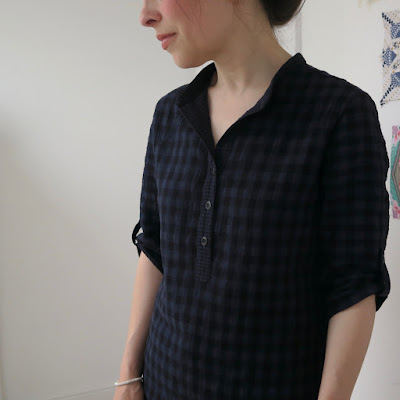 I finished with french seams throughout, just because. The pattern is my own and the same one that I used to make this shirt, although I've shortened the sleeves a little this time around (I never feel like they are when I'm actually wearing it, but the photos made me retrospectively feel they were too long on that shirt) and left off the collar in this version. So really it's more like this shirt, but less drapey, so to me it has more of the feel of the first shirt than the second! Like a pony perfecting its one and only trick, I have plans for this pattern in several other fabrics.

Although actually, I'm more of a two-trick pony, because I've also been remaking this top recently and have plans for more as my sister would like one too. It's so good to be gathering a handful of patterns that feel completely reliable in terms of fit and that get regular use in my wardrobe, although it can make me lazy as it feels far easier to just remake those patterns in different fabrics than to challenge myself to try something completely new.

What are you drawn to sewing now that the weather is warming up (or cooling down if you're in Australia)?