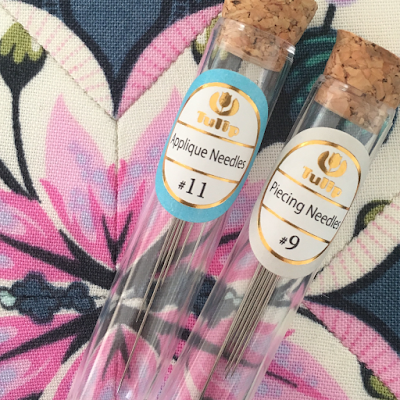 I recently decided to do some research to make absolutely certain that I was using the best possible needle for my English paper piecing. For several years now, I've been incredibly loyal to Clover Gold Eye appliqué needles, enjoying how fine and smooth they are, while inexplicably overlooking that their spiky little eyes had a habit of tearing up my finger tips whenever I forgot to use a thimble. Added to this, I am a piecer who instinctively gives a slight tug after each stitch to make sure that it's definitely secure and this habit was not endured well by these needles; snapping in half and losing part of the needle, until my husband unwittingly relocated it with a body part, was a regular occurrence, often accompanied by incensed accusations of carelessness. So there was definitely some room for improvement (on the part of the needles and the wife).

Being a superficial creature at times, I began my research by going straight for the needle that was most aesthetically pleasing. Tulip Hiroshima needles come in divine cardboard packaging and the needles themselves are contained in tiny cork-stoppered glass test tubes, which will give those prone to flights of fancy all the propulsion needed to indulge themselves in delusions that they are in fact working in a sewing 'lab' rather than a room. As I took them from the packaging, my white lab coat and safety goggles may almost have been visible and the bunsen burner in my heart was certainly aflame with some ferocity. 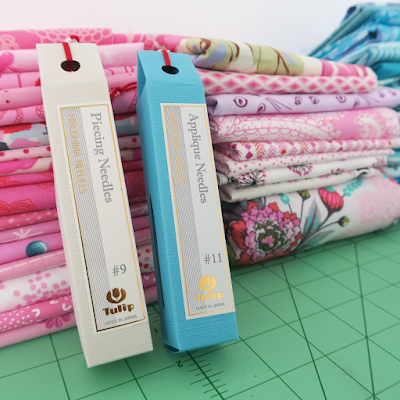 I tried the piecing and appliqué needles, although in reality I'd very probably prefer the milliners needles. In terms of stitching, they were a pleasure to sew with and left my finger tips unpunctured and feeling springy, however, I did find that they bent incredibly easily over the course of an hour's sewing. As these Tulip needles are eye-wateringly expensive, costing £5.65 for just six needles, I'll be reserving use of them for high days and holidays...and those days when one's spirits just need the kind of boost that can only be brought about by a new lipstick or a beautiful test tube full of sewing needles. Tulip's presentation is, without doubt, the finest amongst sewing paraphernalia that I've ever encountered and I know from discussions with other sewers that many people use them as their staple hand-sewing needles, but because my own sewing technique seems to cause them to bend, for me they'll have to be more of a birthday or Christmas wish-list item.

Just in case you're wondering about different types of needles yourself, it's probably worth saying at this point, that most people seem to prefer a longer needle for english paper piecing (although that's not true of everyone), making either a milliners (also known as a straw needle) or an appliqué needle a suitable choice. Milliners needles are just like 'sharps' needles (commonly used for general sewing), but longer; appliqué needles also offer extra length while having a fine point to minimise how much the fibres of the fabric are pushed apart as the needle enters. For my own sewing, my latest research seems to suggest I'm better with a slightly thicker milliners needle. 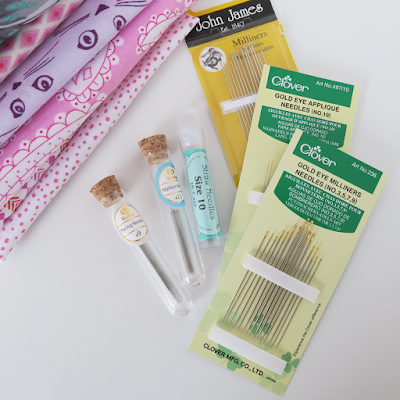 Next, I trialled some John James milliners needles. From an aesthetic point of view, with their workaday black and yellow packaging, John James offers the least appealing packaging out of everything I tried so it pains me to say that it was love at first stitch. They glide through the fabric, leave my finger tips feeling sprightly and over many hours of stitching suffered no breakage and relatively little change in shape (the needles that is, although thankfully the same goes for my fingers). They cost a thrifty £1.65 for an envelope of 25 size 10 milliners needles and have the appealing heritage of being made in Redditch, England, a place steeped in centuries of needle-making history.

Hiroshima also has a history of needle production dating back 300 years and produces over 90% of Japan's needles. These details may seem irrelevant, but in the cases of both the Japanese Tulips and the English John James, I really enjoy using a product that has roots, uses traditional manufacturing processes and that has not been outsourced to China in a cost-cutting measure. John James themselves have been around since 1840.

I then turned my attention to establishing exactly which size of needle I really preferred and dispensing with my mixed pack, ordered three tiny envelopes directly from the John James website in sizes 9, 10 and 11 (for the uninitiated, the number on the needle pack refers to its size, often both length and thickness. Generally the bigger the number, the smaller and finer the needle. So a size 5 needle will be bigger and wider than a #10). Until this research, I'd had a habit of picking up whatever Clover Gold Eyes my local shop had in stock between a size 9 and 11, so I was keen to know what my ideal needle length would be. I spent a completely unnecessary few hours swapping over the needles as I sewed, because it was easy to conclude almost immediately that the #10s felt (to steal an expression from the mouth of Goldilocks) 'just right', with the #11s feeling just a bit too long and unwieldy and the #9s feeling just a bit too small. I'd imagine that what feels just right may well have a lot to do with hand size. 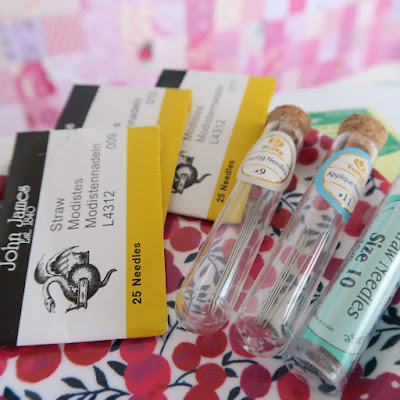 In the interest of thorough research though, I decided to also try out Jeana Kimball's Foxglove Cottage milliners needles as these were recommended to me by two sewers whose product recommendations are always excellent (thank you, Kerry & Lorena). I found these were almost identical to the John James needles and didn't bend too much while sewing. In side by side testing (I threaded one of each up and swapped between the two) though, the John James felt 'right' to me in a way that I couldn't actually pin down. The Jeana Kimball needles cost £3.25 for 16 - a little more expensive than the John James, but still very reasonable and the increased cost is possibly down to the packaging which, as it's more travel friendly, is very welcome (in this context, 'travel' doesn't necessarily involve leaving the house, but also refers to moving from one room to another or even shifting in one's seat and thereby upending all items not fastened down). The John James envelopes, which threaten to deposit needles all over the house, are a point of irritation and require constant vigilance on my part...(when I remember I will transfer them to a needle pot, but I'd wanted to keep them all their labelled packaging during my testing).

It's now about six weeks since I began this research and I'm aware that it may seem like a rather curious (and possibly completely obsessive) journey to embark upon, but I can't tell you quite how lovely it is to sew without punctured finger tips and uninterrupted by daily games of Hunt the Needle after one snaps in half and propels itself across the room, so I'd encourage you to embark upon your own research if you're not 100% delighted with your needles.
Florence x

Ps. This post doesn't acknowledge the horror of the Trump election. But it feels necessary to say that I have not sewn on and trialled needles regardless. I have sewn on and trialled needles with a head whirling with thoughts or while having conversations about little else. I am sending cuddles to anyone feeling as horrified and stunned as I am - 2016 has been a shocker of a year between this and the EU referendum, hasn't it.
Email Post