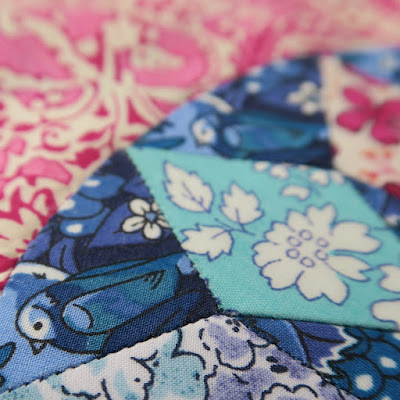 I've been working on the same English paper piecing project for months now, but recently I've had a short break to tend to some piecing in Liberty Tana lawns, a snippet of which is shown above (frustratingly, both are for different projects that I can't share here until next year). The change of project gave me that feeling I have in the depths of winter when I've been wearing the same jumpers in rotation for months and then someone hands me a new one to wear (I'm not sure who that nameless jumper-hander is...in reality it's likely to be a delivery driver as it's probably one that I treated myself to). But either way, like the jumper, the sewing project was shiny and new, and therefore invigorating.

This diversionary project was at a much smaller scale than my current one and that brought an interesting revelation with it: it produces a very diminutive pile of off-cuts and fabric debris. Afterwards, it felt like tidying up the desk in a doll's house. (Which incidentally, does the fascination with those ever go away? We had one that was handed down and it had tiny light bulbs suspended from the ceiling of each room controlled by miniature switches on the walls. I haven't seen it for years, so I'm imagining it may have been lost in a house move, but I think I could still happily spend hours decorating one - I may keep that in reserve as a project for when I retire...a mere twenty-five years away). 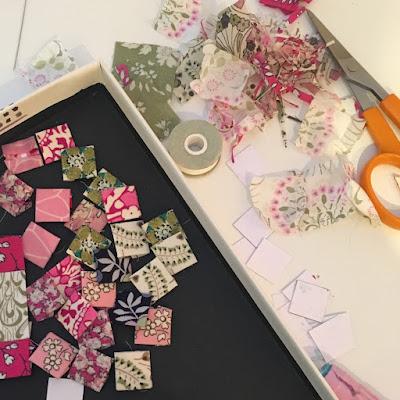 Although the cutting table by-products were small in scale, the room was in just as much disarray as with any other project while I was deciding on what combination of fabrics to use. My parents happened to pop over and ventured up to the loft to see me one day when Tana lawns were strewn across the floor and their lovely faces looked discretely aghast, as though they'd just discovered that the messy teenager who they believed they'd said goodbye to twenty years ago was still actually alive and well. I realised the difference is that the messy teenager didn't care who saw the mess...the grown-up version felt slightly mortified. I'm not sure that people can comprehend the way that fabrics can quickly snowball into massive piles all over a room unless they sew themselves. Every time that I tidy my sewing room (which is often as I like to at least start with a blank canvas), even I lose the understanding of how it happens! But even with the best intentions, I find it almost impossible to tidy-as-I-go. For me, creativity has an element of 'mad professor' about it that doesn't seem to combine well with the neat-freak that lives in me the rest of the time. 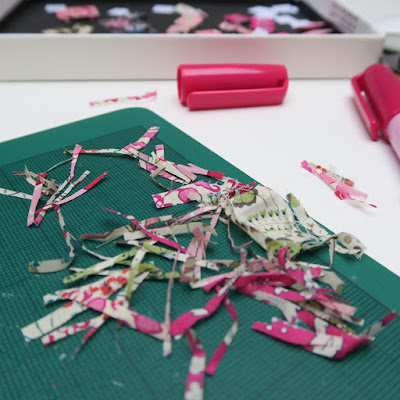 The fabric-choosing process is something that I've been thinking about quite a lot recently. In every other area of sewing, I feel completely happy in my own company barely noticing the hours drifting by, but sometimes when I fail to find a combination of fabrics that work well together after several hours of trialling them, I can begin to feel oddly lost and lonely in the task of chasing that elusive well-balanced combination. I'd been discussing this with my sister shortly before embarking on this project and once I'd begun she very kindly appeared at the end of my phone as a sounding board and not only analysed every combination that I ran by her, but also texted over images of swatches that she'd found online of possible alternatives that might work. On Sunday evening my mother joined in too and I finished that weekend of choosing fabrics with my sanity thoroughly intact. I think there's a case for there being a website dedicated solely to the process of assisting other sewers in choosing fabrics. Typing that, I'm suddenly remembering a book by Arabella Weir that I think came out about 15 years ago, entitled Does My Bum Look Big in This? This website could be something more along the lines of Does My Quilt Look Good in This? And unlike the first question, where the only answer is 'No, your bottom looks awesome in everything you put on it', posters on the site would be actively hoping for constructive criticism and honesty. 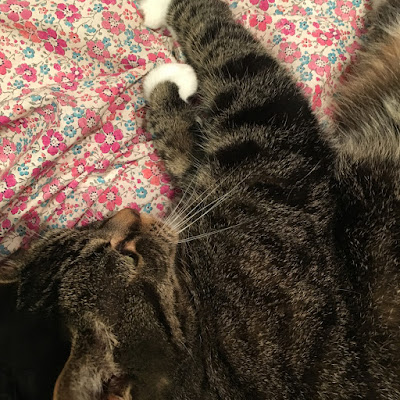 In other news, I was talking to someone recently about Facebook. I don't really love Facebook as a platform so I've never given it too much thought, but when he said that having a page was a really good way to document things that: a) didn't merit a whole blog post b) weren't necessarily visual enough to want to put on Instagram and c) required more words than Twitter allowed, I suddenly realised that he may have a point. I barely use Twitter because of the 140 character limit as it's too time-consuming trying to work out how to convey a message while still maintaining basic levels of grammar and punctuation and I probably only post a photo to Instagram once or twice a week. So, if you'd like to follow my new Facebook page, you can find it here - I'll probably be posting about fairly random stuff (I know I'm tempting you with my focus and clear vision for my page!) - I'm guessing it will be a mixture of sewing, books, news, podcasts, films and generally things that I've seen and found interesting and I will also let you know when there's a new blog post up here.

Despite having run a Facebook page for Squeebles for several years, there are still things that I found confusing about the set up process for my own page - like why it says that I'm not permitted to have an @username and why it won't let me change my page name from what sounds in retrospect rather long and convoluted...but I'm going to ignore those things for now.

Finally, thank you so much for the interesting conversation following my recent post about needles - I have ordered some Bohin needles to trial at one commenter's suggestion and will report back! But otherwise, I'm still happy with my John James, even though one poster raised concerns that they're actually made in China! This was rather crushing news, but when I phoned and asked, John James said that they still make many needles types in Redditch, so not everything is outsourced at least.

This weekend, I am nursing a cold, so will mostly be sewing and watching films or listening to audio books. If you have any recommendations, please do leave them in the comments.

Which reminds me, while sewing the pieces at the top of this post, I watched Somerset Maughan's The Painted Veil on iPlayer and it was wonderful and would possibly go down on my list of top ten films. As per the trailer, the first portion of the film depicts a relatively shallow and formulaic life, but once the location has shifted to the site of the cholera epidemic things seems to completely change - the scenery is stunning and atmospheric and the on-screen chemistry between the characters is incredible and the storyline totally captivating. Sadly, it's now fallen off iPlayer, but it is available to buy for a little over £3, here, if you're interested.