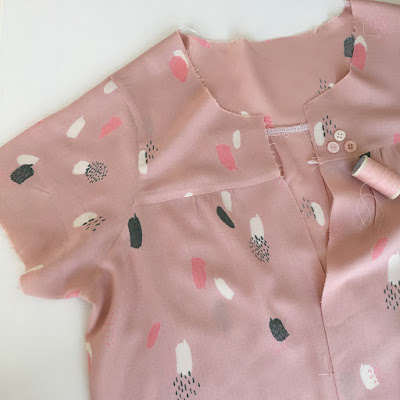 I recently bought some of this beautiful viscose Moonstone Atelier Brunette fabric and it sparked a late-night sewing session the moment it appeared again in the clean pile of washing (approximately four hours after it had been posted through my letterbox - my haste to prewash it, if I'd thought about it, would have told me of the frenzied rush to make something that was likely to follow*). A wondrous thing is the fabric so lovely that it prompts you to push everything else aside to work on it RIGHT NOW!

I watched Miss Potter recently, a film about the life of Beatrix Potter - it's really lovely and currently free to watch on Amazon Video, if you're a Prime member. It's about how her work became published; her relationship with her parents; her female friendships; and the two men she loved during her lifetime - all magically portrayed and utterly captivating. There are a few moments where her illustrations seem to impishly leap off the page while she's doing other things and it's an imagining I recognise in fabric-form - certain fabrics just refuse to be quiet until they've been made into something (although thankfully, I don't hear any voices with this)! This fabric is no exception - it's currently sitting on my cutting table half-made and taking up much needed head-space with its pull to be finished while I'm trying to get on with other things.

Anyway, the fabric. It really has everything: the drapiest drape (I always find Atelier Brunette fabrics tend to wash to be much softer and drapier than when they first arrive and this was no exception); a very wearable print; easy and stable to work. The only thing it doesn't have is a willingness to keep its loose ends in tact - I confess to giving my half-made top a manicure with a pair of tiny scissors before taking this photo and even that has not hidden some of the wandering threads. That's not really a problem, but it does mean seams need to be finished nicely to avoid unravelling - so either french seams or overlocking.  On the colour, I don't have much pink in my wardrobe (it's predominantly navy, grey and black), but I get so much wear out of this top, which happens to be an identical shade, that it persuaded me to buy it.

When I'm craving instant gratification, the quickest route is to draft a pattern based on something I already own. In this case it was an old smock top from French Connection, bought about 13 years ago (I can only pin down a date for this because I remember wearing it almost constantly one summer when my daughter was little). I've realised it's funny how much less I analyse fit when the item is shop bought - it's a top that I've always really liked and felt comfortable in and yet it was only when I tried on my own version of the top that I realised it pulls very slightly along the seam that runs from shoulder to neck. Initially, I assumed that I'd made a mistake while drafting, but when I tried on the original top, I realised there is identical pulling and I'd just replicated the poor fit. Having worn and loved this top for so many years, I've decided to overlook this in my own version too. As I normally irritate myself with my quest for perfection, I'm choosing to celebrate that kind of slapdashery, rather than chastising myself for it! 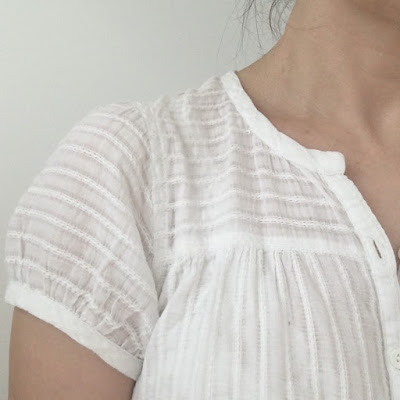 At some point I'll try and write a post sharing a little more of how I go about rubbing a pattern from a ready-to-wear garment - my methods are self-taught, so possibly quite idiosyncratic, but they seem to work for me. It's often very quick (the pattern for this blouse took about 1.5 hours) and the nice thing about it is that I rarely make a muslin when I've used this method as I usually feel confident that it will be an accurate replica of the original. Drafting pleats, gathers and darts can be tricky as the top I'm referencing obviously can't reveal those things in their original flat state, but there's usually a logical way to working out how much room those things should take up on the pattern piece and then adjusting everything accordingly. Armholes and sleeve caps tend to be the thing that take the most time. For this top, the original had slight gathering at the sleeve cap (it's actually more pronounced than it appears in this photo), which I'm less keen on as I feel it visually unbalances my frame (if you're interested, you can see a demonstration of that in this post where I talk about how to make a dressmaking croquis to draw designs on), so on that basis, I removed the sleeve gathering and will also finish the sleeve slightly differently to give a smoother line beneath a cardigan. But otherwise, having pinned where the buttons will go, the fit seems identical to the original, shoulder pulling and all! I'll hopefully show you the finished top in my next post. 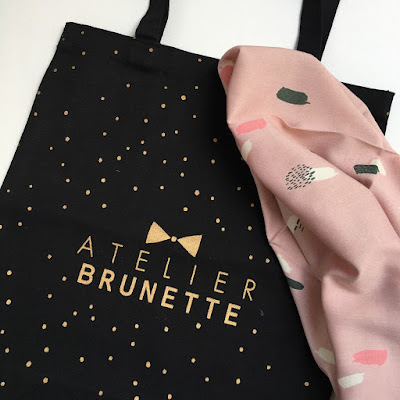 I bought my fabric from M is for Make and when I went back to get some more for a strappy summer top, it was all gone (there is also a beautiful blue version, although Kate tells me that there was a printing error, so it's unlikely to arrive anywhere until September). I'm sure it was only 48 hours since the pink Moonstone arrived on Kate's site, so I think lots of us must be making things from the same fabric this week! I snaffled up this black tote bag - it would totally delight me to see someone else walking down the street with this and to know that at some level they were a kindred spirit. I actually spotted someone wearing an Atelier Brunette fabric in the town where I live a few weeks ago and although I didn't feel I could go and accost her (she looked like she was hurrying), it did make me smile inwardly.

Finally Friday - it's been a long week. I'm so pleased that tomorrow morning will allow for a lie in! What are you up to?

* The arrival of fresh dressmaking fabric was an excellent incentive to do some much-needed washing - a daily delivery may just be the ideal way to establish a regular washing routine - I will discuss this later with Mr Teacakes to see if he thinks this may be a good strategy!

Ps. I've now panic-bought a little more of the pink moonstone from Guthrie & Ghani, so it can still be found if you like it. x
Email Post