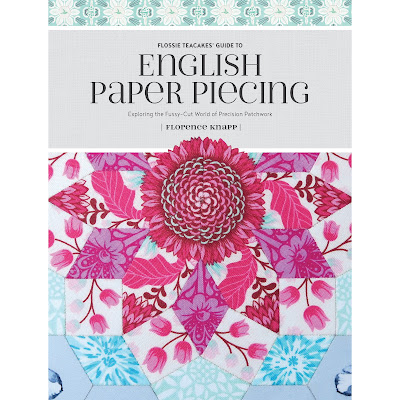 I've just looked up the date and found that it's 23 months to the day since an email dropped into my inbox that was the catalyst for the book you can see at the top of this post. I did consider waiting a month to write this post when I realised that, as it would have so much more symmetry, but impatience seems to have won out.

Before I tell you about my own book, I want to rewind to 2012, when I wrote a post mentioning one about the late Lucy Boston, written by her daughter-in-law, Diana Boston. That biography very quickly became one of my favourite books about quilt-making and it didn't contain a single pattern; I loved it because at the end of the day when I finished my own sewing, I could take it to bed at night and continue to immerse myself in quilting by reading about Lucy's life and the way she thought about fabrics and the way she planned her quilts, which I found fascinating. I spent hours pouring over that book, admiring the beautiful photos of her finished piecing and looking at the trail of letters she wrote about her various quilting projects. It left me feeling that if I ever wrote a sewing book myself, I wanted it to be one that people could 'read', as well as make things from.

Fast-forward to 26th April 2016, when an email landed in my inbox from the US publisher, Fons & Porter (now the Quilting Company), inviting me to write a techniques-based book about English paper piecing, containing 8-10 hand pieced quilts. The email was so warm, friendly and personal that I was immediately interested, but two thoughts rumbled around inside my head that let me know I wouldn't be the right person to write that book for them: for me, sewing is a joyful thing, in part, because of its slowness and so the idea of sewing that many hand-pieced quilts in the space of a year left me feeling unenthused - I'm always in awe of authors whose passion only seems to be intensified by such a prospect, but I was fairly sure there was a danger it would crush mine entirely; secondly, I knew that if I were to put myself through such a thing, at the end of it, I still wouldn't have written the book that I really wanted to write.

So when I replied, it was to ask them to consider my writing a completely different book to the one they'd been hoping for. This was how I summarised what I wanted to do in one of our many emails: I’d been hoping to write a book that would feel a treat to dip in and out of: storied, thought-provoking, discursive, emotive, questioning - not only a how-to around English paper piecing, but within that, also an exploration of ‘why?’ - because it is such an odd thing that we spend so many hours fixating on cutting up small bits of fabric and then sewing them back together again, often even acquiring repetitive strain injuries in doing so. I see this exploration of ‘why?' naturally unfolding over a series of interviews, but also in looking generally around the subject of working with our hands. I then went on to make a very long list of all the specific things that I wanted to write about; several of which relied upon people - many of whom I had no idea if I could even get in touch with - agreeing to be interviewed by me.

Although I had a strong belief in my vision for a book, in all honesty I hadn't expected to find a publisher who would agree to my approach, so I was both surprised and delighted when the acquisitions editor wrote back to say that she loved the sound of it and would like to put it in front of the rest of the team to get their feedback. I feel truly lucky that they were willing to take a risk on what, at that time, was a rather underdeveloped collection of ideas.

So, let me tell you a bit about the book that eventually grew out of those initial emails. The first half is full of discussion, stories and interviews, not just about English paper piecing, but more generally about working with our hands. Amongst other things, it will take you on a journey into prisons to hear about men who hand-sew as a way of creating a new life for themselves; we'll look into why humans are so drawn to symmetry and repeating pattern; I'll bring you with me on a day trip to see Lucy Boston's English paper pieced quilts in person; we'll consider how fabric has influenced the English language; you'll find out how the acclaimed novelist Tracy Chevalier came to write a story about hand-pieced quilts; we'll explore why people feel compelled to sew and what the mental and physical benefits of doing so might be; we'll meet the granddaughter of a man whose individual quilts contained more pieces than I could ever hope to sew in a lifetime; and from there, we'll go on to discuss what drives some people to undertake (and successfully complete) such extraordinary feats of quilting. In my research, I pored over books and papers written by quilt historians, neuroscientists, physicists (Richard Feynman and quilting have more in common than you might first imagine), psychologists and mathematicians, as well as consulting with fellow quilt-makers - the result is an eclectic collection of bite-sized articles and essays (for want of better words - neither of those actually feel quite right), rounded off by a series of interviews where I'll introduce you to some of my favourite modern-day English paper piecers.

In the second half of the book, there's an extensive techniques section that covers everything from looking at how different shapes tessellate, to how to make your own templates, along with step-by-step instructions and photos walking you through every technique you might need for EPP. The book also takes an in-depth look at fussy cutting and the effects that can be achieved by cutting fabrics in a variety of different ways (there are some fun visuals to go with this bit). Finally, there are three rosette patterns, each named after a place where I've lived, and then a bigger quilt pattern that contains more advanced techniques, including tackling curves.

My book is available for pre-order now through Waterstones, Amazon UK, Amazon US and other places where you can buy books :) I may also stock it on my blog to be sent out directly if there's any interest. 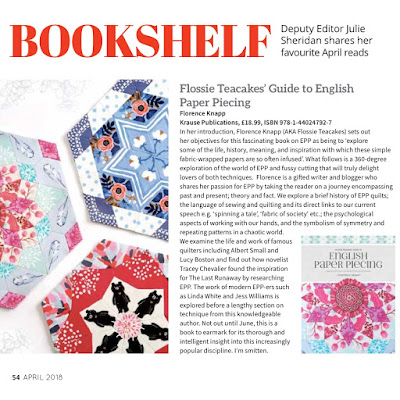 This feels like a long, wordy post, not broken up by many photos, but I'll share more over the coming months. My book is out in the US on 29th May and in the UK on 29th June, which was feeling like quite a long time away, until it received its very first review in a magazine this month and now suddenly it feels like my book may not just be a figment of my imagination and as though there may be a day when it's sitting on the shelves of a real bookshop or quilt store. Above, is the review written by Julie Sheridan in Popular Patchwork magazine - I'm not sure I could ever have hoped for a more generous write-up. Just click on the image to enlarge, if you'd like to read it.