The Tale of My Book Arriving 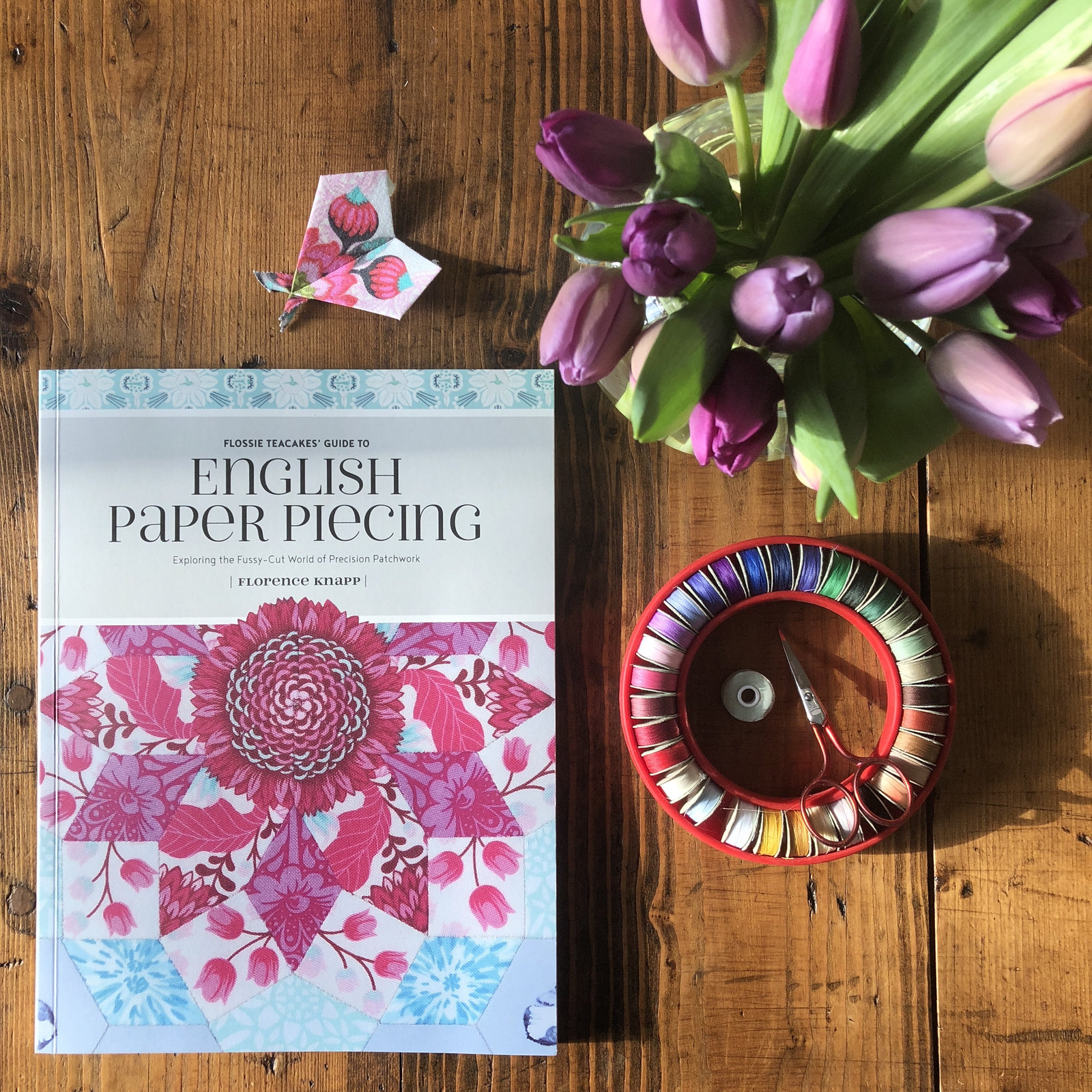 Last Thursday evening, all four of us were gathered in the hall catching up on how everyone's day had gone as I'd recently come in from a course and my daughter had just arrived home from an all-day exam. Anyway, at some point, I noticed a package had been delivered and when I picked it up, still chatting, and studied the sender's mailing address on the label, I saw that it was from my publisher. I hadn't expected an advance copy of my book for at least another few weeks, so it was an unexpectedly heart-leapy moment as I knew what must be inside. But rather than tear into the package, I put it back down and insisted that we finish the conversation before I opened it. The other three were appalled, but when they saw that I wouldn't be swayed, they agreed to finish telling me about their days, albeit at breakneck speed.

The reasons behind delaying the opening were as follows (bullet-pointed to assist in separating out the contents of my head):
So we sat and chatted for a while longer, punctuated by someone saying every now and then: For goodness sake! Can't you just open it now? Until finally, when I felt we'd exhausted everything that anyone could offer up about their day, we all carried the package into the kitchen (the others were packed in so tightly around me as we walked down the hallway that it felt very much like communal carrying). On the kitchen worktop, I sliced open the sellotape on the cardboard box with a bread knife, until my husband stepped in because he felt I was at risk of inadvertently cutting a slice of my book off. There was some call for me to change implement, but after my initial reticence around opening the package, once I'd actually started I couldn't be stopped! I found my book swaddled carefully in bubblewrap with a lovely note inside. 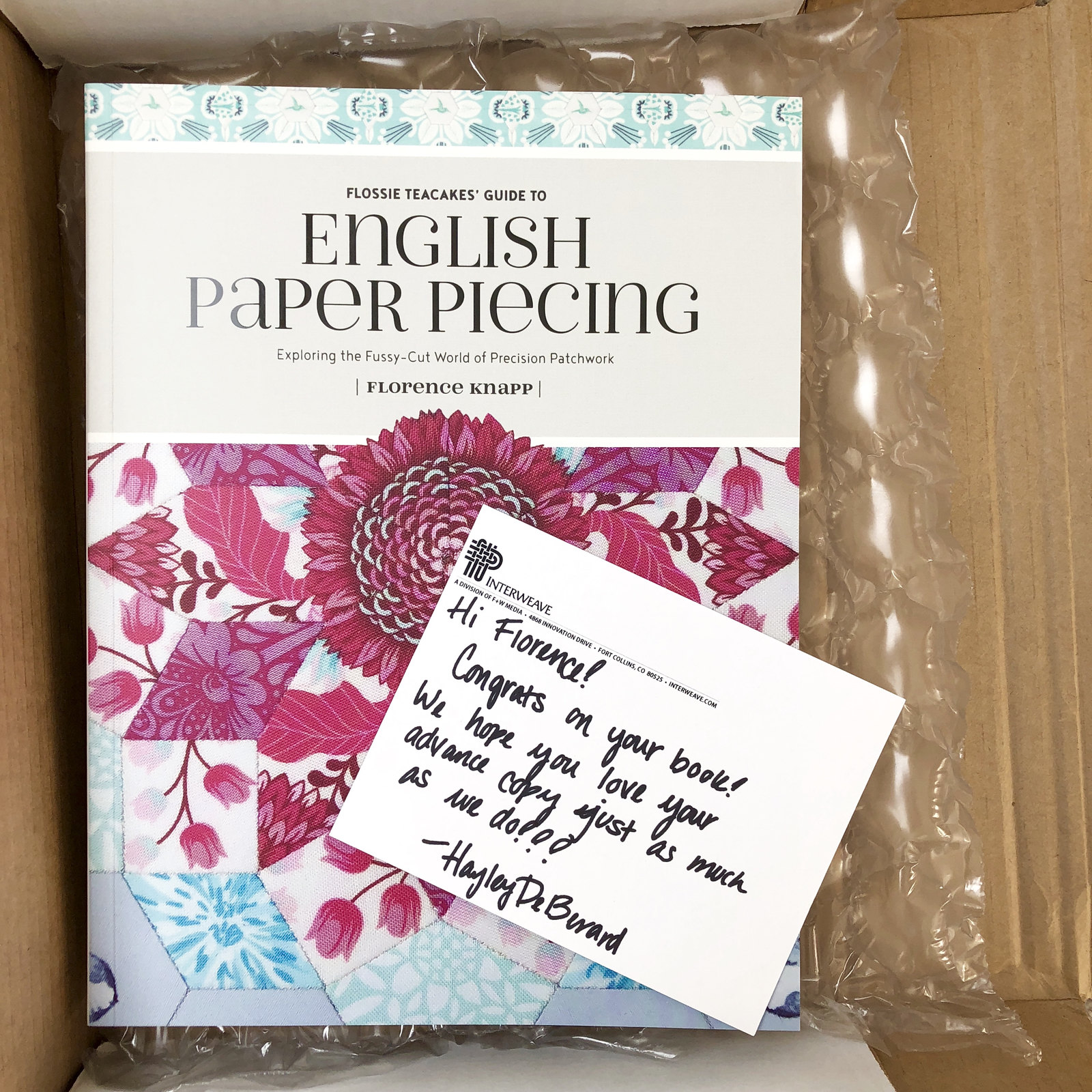 We'd had a funny thing while I was writing this book, where each member of my family had enjoyed discussing who my book might be dedicated to and I'd sometimes overhear amusing conversations about why each of them was more worthy of that dedication than any of the others, while at other times they'd actually go into full campaigning mode telling me directly of their merits!

It's an odd thing but on the long list of Things I'd Love to Do in My Life, dedicating a book to someone has remained a constant - I think because it represents a rite of passage in book-writing that's also a really lovely way to celebrate the people who you love and who are special to you. But how do you know how many books you're going to get the opportunity to dedicate? On that basis, it could only ever have been to all of them for this first one, just in case it's the only one. 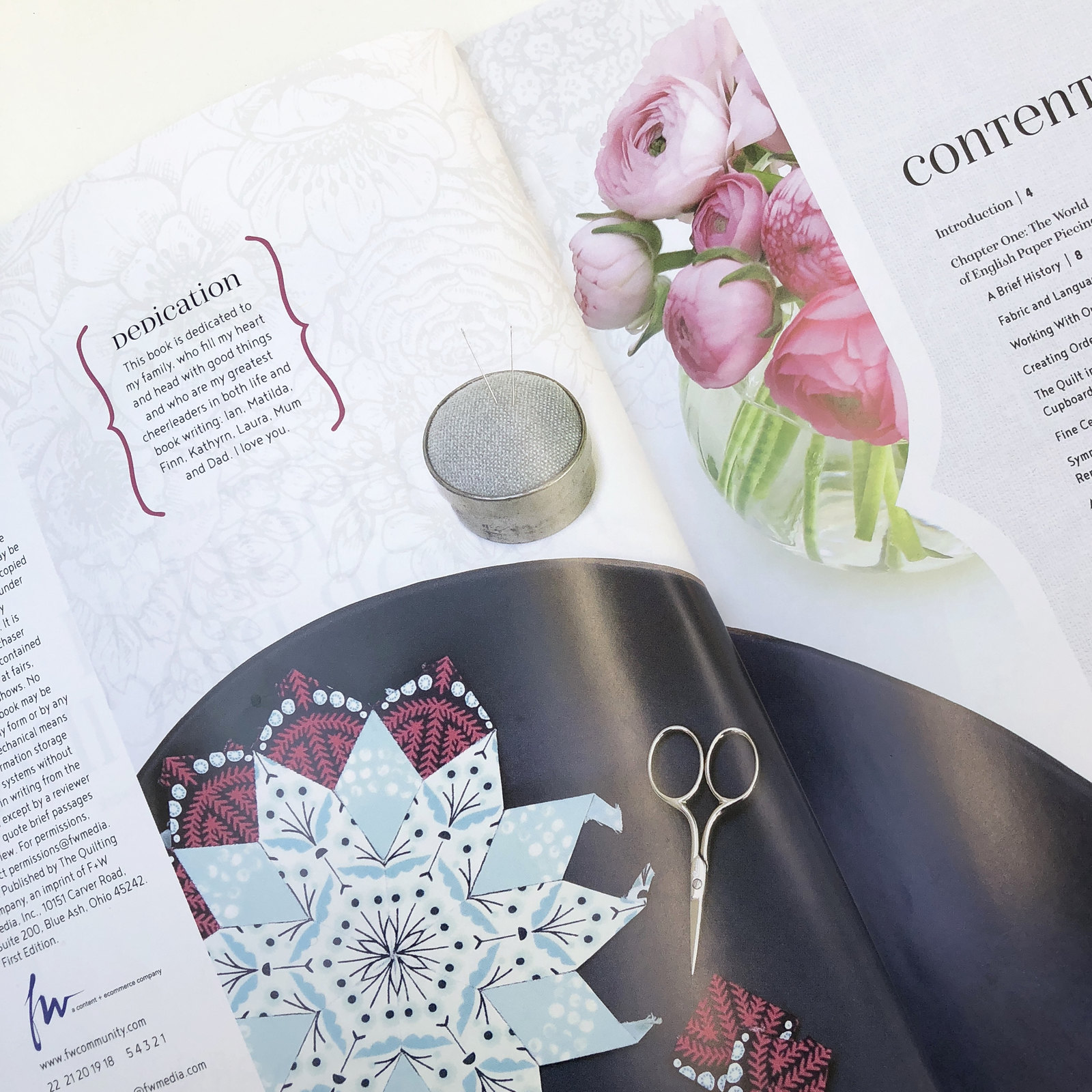 I've withheld revealing who the dedicatee might be for the nearly two years now, so in many ways I was as excited to finally share this part of the book with them as they were to see it. So after we'd all admired the cover, I flipped straight from the dedication at the front of the book (above) and then to the acknowledgements at the back where they each got a more in-depth mention (as do you, lovely blog readers).

I felt so lucky that we were somehow all in one place when I came to unparcel it as it made it extra-special.  It also surprised and delighted me to find that my husband's eyes haven't stayed entirely dry for the delivery of any of my babies, including this one. 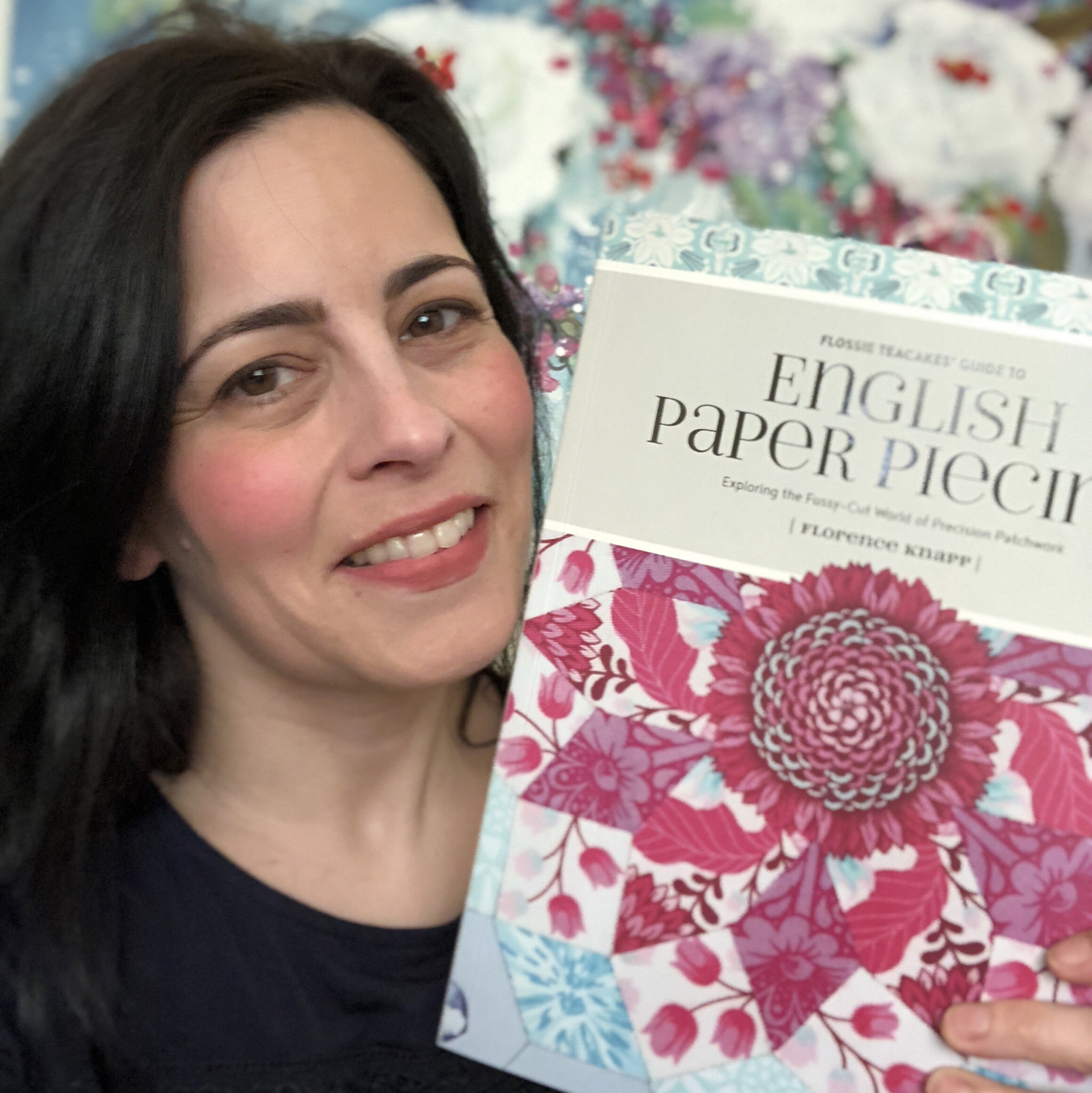 If you have an active imagination, you may have been left wondering, after my earlier worries, if the book had magically grown two heads once it had ventured off the screen and grown into a real live papery thing. I'm pleased to report that it hadn't, but it had grown lovelier. Not only because real books are lovelier than pretend ones, or because it was exactly how I was hoping it might be, but more because Pamela Norman, who designed the inside of the book, had done such an amazing job of making it look very much better than the individual pieces of artwork I'd submitted and I could only truly appreciate all her cleverness once I had the physical book in my hands. I also adore the fonts that ended up being chosen - I'm not sure they could have picked a set of fonts that I'd be more delighted by than these. 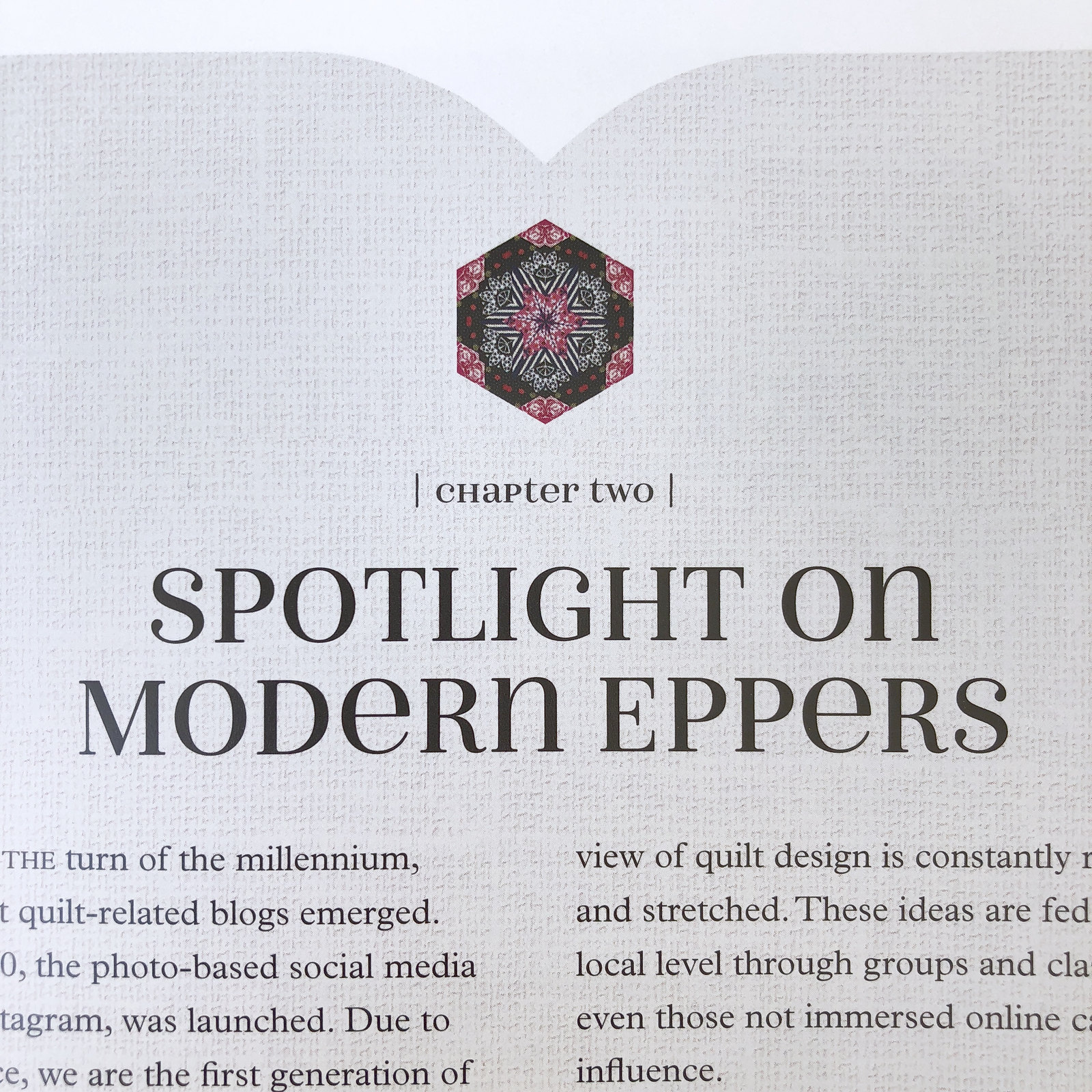 This is the same font as the one used on the front cover. They agreed to send me a font file for it and it's a funny mix of capital and lowercase letters that surprise me with where they land as I type, although Pamela seemed able to magically change some of the lower-case to capitals if needed. I think I might update my blog banner at some point to match it.

Nb. For clarity with the photo above, as it may not be clear out of context and use of the word 'modern' can be contentious: I've featured the work of several quilters who have passed away in the previous chapter, so the term 'Modern EPPers' was used here to to differentiate between past and present...not to create a division based on quilt-making style or age :) 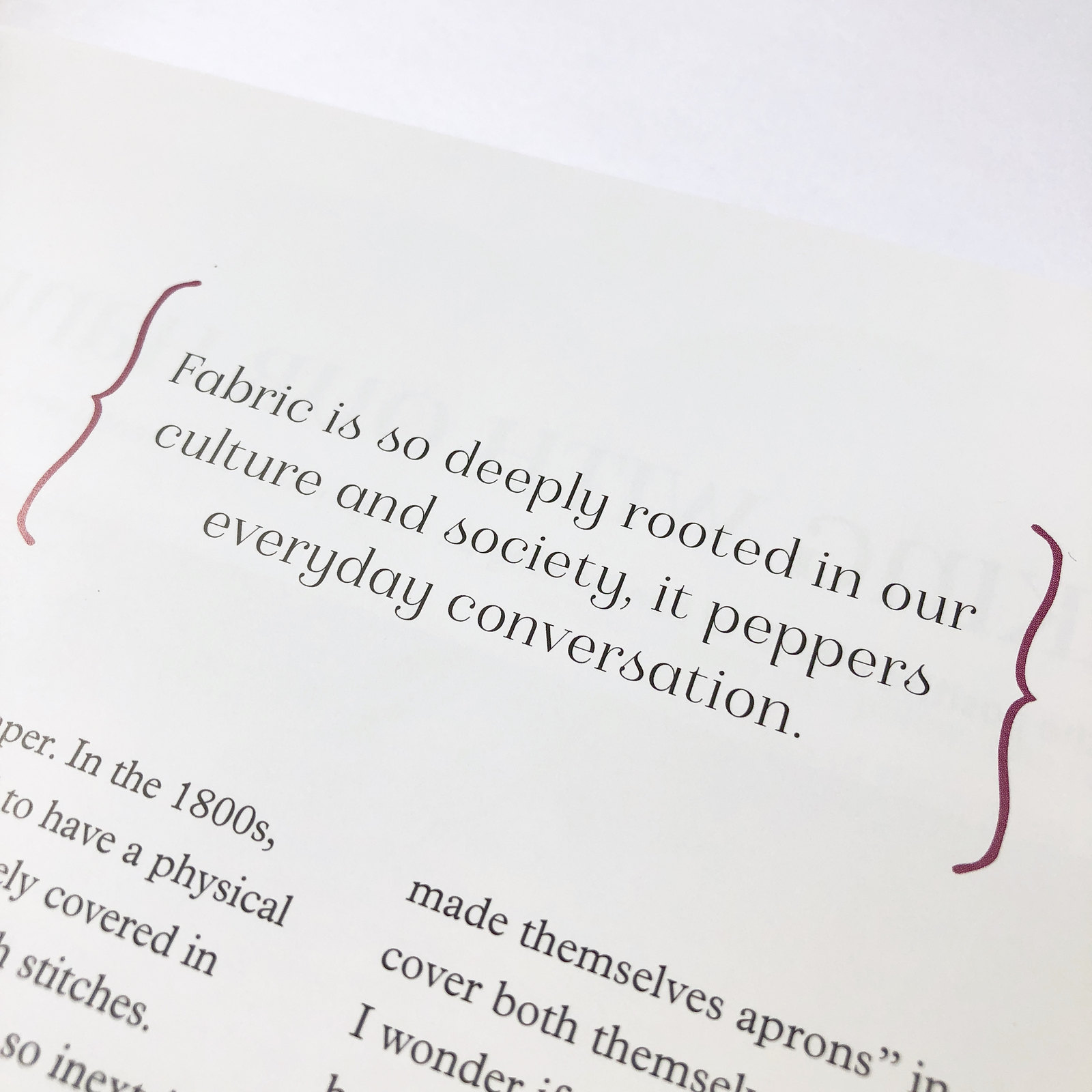 And here's another font that's been used for picking out little bits from within the text or sharing quotes.

Later on Thursday night, my husband was out for the evening and both children were revising until late for exams, so I sat in bed and read my own book! I'm not sure whether it's seemly to read one's own book - it certainly felt strange, but equally it would be odd to not ever read it in its final form, wouldn't it? So I did so behind closed curtains (and perversely now seem to be sharing it here, wilfully undoing the clandestine nature of my reading).

And that is the tale of my book arriving. I'm now so looking forward to it being out in the world and being able to share a few more pictures here.

If you're interested in pre-ordering a copy (more info about what's inside in this blog post), you can find it on Amazon US, Amazon UK, Waterstones or my publisher's website (it's out on 29th May in the US and the 29th June in the UK).

I happened to have a conversation with Abby yesterday where she mentioned in passing how important pre-orders were - we didn't get a chance to discuss why and I have to confess to not truly understanding the relevance of them at all before looking it up just now, but if you're interested in also discovering the thinking behind pre-orders, Kim Hooper, a novelist who came up when I googled, has written a good post that explains it. I'm really just delighted if people ever want to buy a copy of my book, irrespective of when, but I did enjoy the lightbulb moment of discovering what pre-orders were for.

Going back to the hallway gathering where this post began, don't you find some of the best conversations (or even animal cuddles - Nell loves lying on the bend in the stairs and having people sit with her there) happen in unconventional locations around the house? From time to time, we seem to end up all sitting around on the stairs or the upstairs landing and there's something about being crammed in those tiny spaces without real chairs that feels cosy and more of an 'I really want to spend time chatting with you despite the lack of chairs', rather than an 'I'm chatting to you as we both happen to be lying on the sofa at the same time, which is super-comfy'.