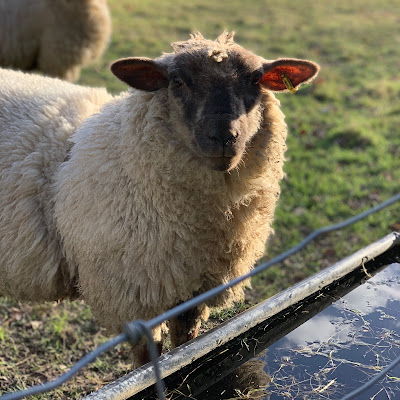 You may be forgiven for wondering if you've stumbled upon the Country File blog - this little face was the first thing that leapt out at me when I went into my folder to find a photograph to illustrate this post - it was taken a few weeks ago on a walk with my husband, but bears no real relevance to what follows (especially as it exists outside).

Today marks the first day since the 10th February that I've been outside, having been bedbound, or more lately sofabound, for ten whole days with flu. I slept through the first three days and four nights, only waking to drink water and shiver dramatically with audibly chattering teeth. On the fourth day, I managed to stay awake for longer than five minutes and lay in bed doing nothing other than thinking r e a l l y  s l o w l y about things like how they get the plastic coating onto paperclips (my main consideration was how they coated them with no blobs or missed bits, or whether the coating was actually a pre-formed tube that was carefully slid onto each paperclip). I then moved on to thinking about how they get the led into pencils. Thoughts like these entertained me for at least twenty-four hours and were interspersed regularly with the conviction: I'm going to look this up on my phone and find a video that shows how it's done once I'm well enough to hold my phone.

On the fifth day, when I was well enough to hold a phone, I realised I'd enjoyed not holding one so much that I didn't want to start again, and reached instead for my Kindle, where I spent the next five days devouring books in-between extended catnaps. Here's what I read:

History of Wolves, by Emily Fridlund - this book was incredibly beautifully written - there were certain sentences that made me stop and reread them over and over for how perfectly formed they were, my favourite being 'Winter collapsed on us this year. It knelt down, exhausted, and stayed.' But actually, as a novel, I didn't really enjoy it - the motivations of the characters felt too exhaustingly far from a place I could relate to in order to warm to any of them and the bleak confusion of it all matched my fluey-state and made the story feel like part of a bad dream (this was shortlisted for The Man Booker in 2017, so others clearly felt differently).

Next, I read Life Drawing, by Robin Black, a recommendation from my dad, who'd read an old review of it in the Guardian online and texted to say he thought I'd like it. I really love books where a good part of the narrative is based around the character's creative process (I loved Celeste Ng's Little Fires Everywhere for this, and Anita Amirrezvani's The Blood of Flowers did it excellently too). Life Drawing centres around painting, but for some reason that part of the book didn't engage me in the way I'd hoped, although I did enjoy it generally and the last quarter was a page turner.

My next choice was Convenience Store Woman by Murata Sayaka, the much talked-about translation set in a Japanese convenience store. It's a quirky story that makes some interesting comments about life and the way we are as human beings, and I liked the central character who struggles to fit in with society's expectations, but found a storyline with a co-worker who went to live with her felt implausible, and ultimately it stole away some of the book's credibility for me.

I then read half of two different books, and gave up on both of them, so they'll remain nameless, but at this point, I was feeling I'd had only one true hit and several misses and semi-misses and should avoid choosing any more books, but then the next one was a corker. The moment I started reading Natalie Hart's Pieces of Me, I sank into the writing and knew I wanted to stay there for longer than the pages of the book would allow. It's a love story set between Iraq and America and shows the effect war can have on the psyche of those who fight in them.

Next came Meg Wolitzer's The Female Persuasion, which I chose because it came really high on the Readers Choice Awards 2018 on Goodreads. The overarching theme (as you might imagine from the title) is feminism, which is unpicked and dissected through a myriad of different storylines within the book, but the bit that really carried me away are the wonderful characters Meg creates, so richly drawn that I felt I knew them. She also writes brilliantly about being young and idealistic and trying to discover who you are. I've added several of her other titles to my 'To read' list - have you read any of them, and do you have any favourites?

Finally, on day nine of my extended stay in bed, I started reading The Leavers by Lisa Ko, which I'm yet to finish, but it's excellent so far and centres around the life of an illegal immigrant and her child.

In between all that reading, I also watched some good things on television. On the recommendation of a friend, my daughter and I watched the BBC three-part series of Andrea Levy's The Long Song, which was excellent, if disturbing (it centres around slavery in Jamaica). We also tore through the new Amazon Prime series, New Amsterdam, which is set in a New York hospital (think Grey's Anatomy, but better), and we're enjoying watching each episode of Cold Feet as it arrives (Monday evenings).

I picked my husband up from dropping his car in at the garage this morning at 8am and we stopped in at a nearby supermarket to do some food shopping. It felt quite odd to be out in the world and by the time we arrived home forty minutes later, I felt ready for another lie down. I'm hoping to have the energy to see if a sewing needle weighs too heavily in my hand this evening...

As a flu-related footnote, I can tell you that keeping one's skin in a stable environment (with none of the indoors/outdoors shenanigans that normal life requires) does amazing things and it feels weirdly smooth and seems to require no moisturisation or any of the usual things it cries out for - if only I could stay indoors forever. The last time I had flu this bad was at the turn of the millennium when it stayed for three weeks - I remember dragging myself into work half-delirious several times (I worked for a paper and regularly started my shift at 4am and am sure I nearly died on a London bus going into work early one January morning), but being sent home each time, and there too sleeping through several entire days...it took me weeks to feel normal again, but when I finally did, I found that all the extra sleep left me feeling super-charged, so I'm excited to get to that point again...

I'm also relieved to have started reading again as I didn't read a single book for the whole of January, which felt like an odd thing indeed. What are you reading or watching at the moment?