Pierre Bonnard and Other Things... 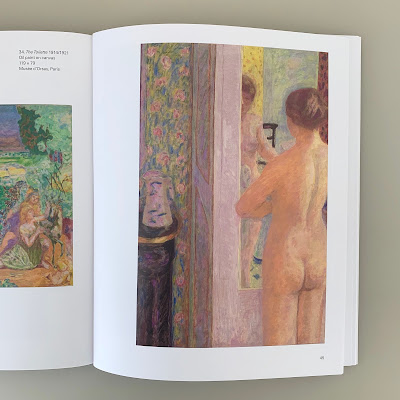 Last week, I went to the Pierre Bonnard exhibition at Tate Modern in London. It was gorgeous and the paintings featuring wallpapers and fabrics doubly so - I'm unsure how a painting of a floral wallpaper should be so much more captivating than one of an actual flowering landscape, but somehow it is (to me, at least). We played our own game of Where's Wally, spotting Bonnard's wife and companion Marthe, who featured in many of his paintings, although not always prominently. Often we'd think it was a painting where Marthe hadn't snuck in, only to find her out on the balcony visible through a window, or hiding in the wilderness of the garden. The postcard (below left) was one of my favourites. Note the less captivating outdoor scene on the programme...or do you find it more so? Is it only me who could happily pass by the outdoor scenes? 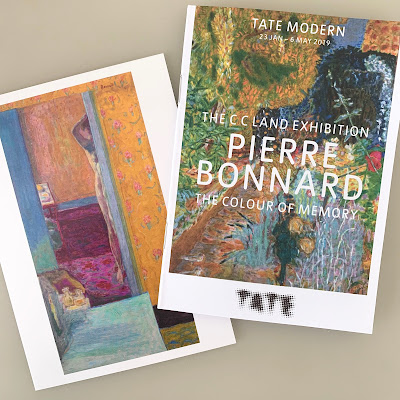 Yesterday I spent a delicious afternoon with my husband reading the Sunday papers in total silence, lying at opposite ends of sofa. We fell asleep covered in papers and woke several hours later, and I realised there are few things I love more than lazing an entire day away like this. We used to do this all the time before having children. Now we tend to fill our spare time with doing things - sewing, board games, cooking, chatting, sport...although the sport belongs to other family members, not me - but actually there's a lot to be said for doing absolutely nothing occasionally. Regular readers may be horrified by the outrageous hypocrisy of my lying beneath the red quilt while doing nothing...but what can I say...it was warm. And maddeningly, I now see my husband's point - it's somehow cosier than any other quilt. And the lovely Dog Face, of course, does a lot to improve the eye-stabbyness of the colour. 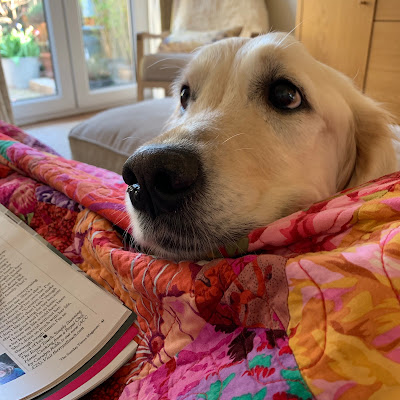 I'm making spectacularly slow progress on the quilt that will eventually replace (in location, if not favour) the red one above, although it's relatively fast for the small number of hours spent sewing so far. This is the one thing I love about hand-piecing over EPP - it's quicker, although still slightly less enjoyable for me. While I've been sewing, I've been listening to archived interviews from the Hay Festival via their web-based HayPlayer, which from memory, I think costs about £10 per year to subscribe to. A few favourites have been Rose Tremain, Gina Miller, and Meg Wolitzer, along with Kishwar Desai and Ann Patchett, who made a joint appearance. I think I love the Hay Festival archives more than any other podcast...I just wish it existed in podcast form, rather than through the web as it seems to have a habit of signing me out in the middle of listening, which is frustrating, but shouldn't allow you to be put off - it's totally worth the small frustration. 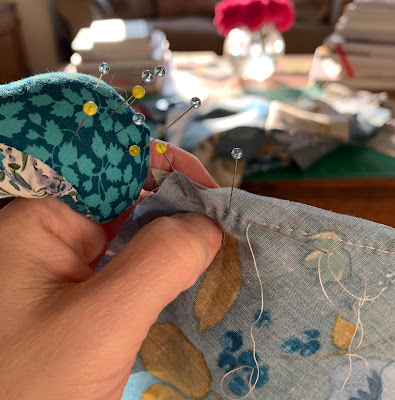 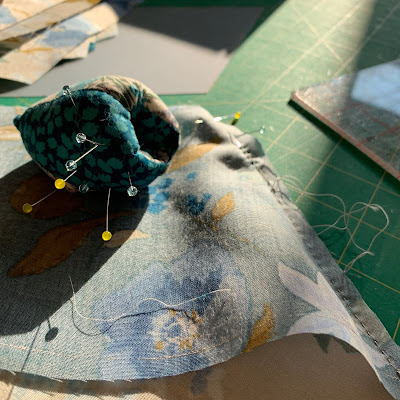 I'm currently reading a collection of short stories, Unaccustomed Earth by Jhumpa Lahiri. It's tricky to find short story collections by a single author that I like as much as a novel, but this is an exception (the last one was Maile Meloy's Both Ways Is the Only Way I Want It, which I read years ago. I then lent it to my dad each week so he had something to read while he waited for my son to come out of a swimming lesson (which means that too must have been years ago as my son is now a giant teenager with a very deep voice). We had to confiscate that book in the end, as the stories were so good that my father kept being late to collect my son at the end of the lesson - that's really the best recommendation for a book, as he is not prone to forgetting grandchildren). Jhumpa's stories that I'm reading right now have the common thread of Indian immigrants living in America, but that's really the only similarity - each new cast of characters feels distinct and memorable. I feel like I know the characters well despite the shortness of the stories, and she has a wonderful way of saying a lot about a person in a single line:

Her father’s penmanship was small, precise, slightly feminine; her mother’s had been a jumble of capital and lowercase, as though she’d learned to make only one version of each letter.
and later:

It was her voice that appealed to him most, well modulated, her words always measured, as if there were only a limited supply of things she was willing to say on any given day.

I hope, if you have any time off around Easter, that you have a lovely break and find time to do absolutely nothing (non eye-stabby quilt preferable, but not essential). Also, do tell me what you're reading or watching. We've recently watched The Bodyguard series (yes, months after everyone else), and found it absolutely gripping. We're now casting about for something else that bridges the  gaping crevasse between our polar-opposite viewing preferences. Previous successes are: Goliath; Unabomber; Handmaid's Tale; Friday Night Lights; Designated Survivor...