Your Own Exceptional Talent 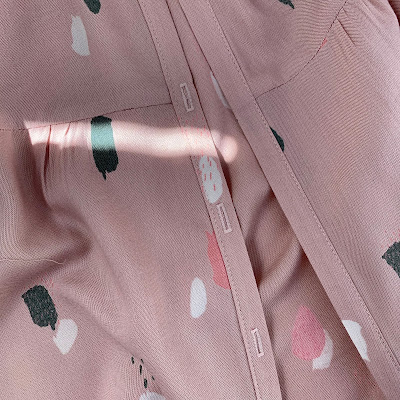 Last week, I finally remade a top that fell at the last hurdle two years ago when I realised I'd forgotten to interface the button placket. I don't really know how I forgot, but I do remember that when I came to slice those button holes open they inevitably looked like wild beasts had mauled them. I'm grateful that my 2019 version, above, was more of a success.

On the subject of failure and subsequent success (a tenuous link as I have way bigger failures up my sleeve than ruined buttonholes),  I've been working my way through the archives of Elizabeth Day's How to Fail podcast recently, which is all about embracing failure and looking at how it helps to shape people's subsequent successes. The interviews, which are vulnerable, funny, and often moving, are like overhearing a discussion between two friends, in part because the interviewees often are Elizabeth's friends, but also because most talk with startling honesty. In theory, it's obvious that failure is a normal and inescapable part of being human (as opposed to a unique sign of uselessness), but I'm not sure I truly believed it until listening to all these interviews.

My favourites so far have been Jessie Burton (novelist), Dolly Alderton (journalist), Phoebe Waller-Bridge (creator of Fleabag and Killing Eve), Gina Miller (the political activist who successfully took the government to court on Brexit-related maters), David Baddiel (comedian), and David Nicholls (novelist), but they're all amazing.

This would be good listening at any time, but particularly heartening in a week where I wondered if maybe the ONLY thing I was any good at was doing buttonholes second-time around. This was later upped to perhaps I'm good at doing buttonholes second time around AND naming songs, when my husband and I were sitting around the table working, and took a few minutes' break to play Name the Song. That makes it sound like a game where we take turns, but we don't - it's one-sided game where my husband goes through his iTunes library and plays the first note of a song and I have to name both the title and the artist. We are both always delighted by how awesome I am at this and I would say it's one of my exceptional talents. The only downside is the realisation I can't actually use this talent out in the world in any meaningful way. I would love to know what you'd consider your own exceptional talent to be!

On Saturday morning, my sister texted me with the words, 'Regretting your colour choice?' and a photo she'd taken of a car, just like my own, but in the most startling shiny gold (it looked exactly like these - do click through because it's hard to believe a car could be so shiny or so golden until you see it with your own eyes). A few years ago, my son showed me some YouTube videos about cars being shrink-wrapped in coloured vinyl (he always seems to know the ones that will suck me in - it was mesmerising!) and I'm pretty sure that's how it was done, as it was way too shiny to be spray paint. 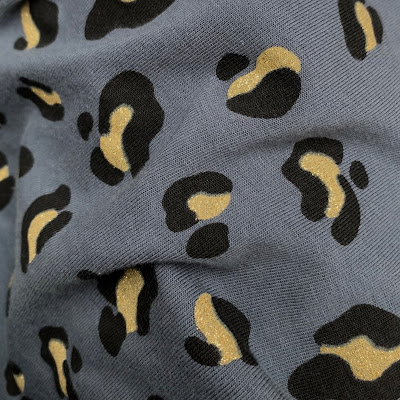 Anyway, when my sister's text came in, I just happened to be sitting with this fabric on my knee, so was able to tell her that I can actually cope with my car not being so fancy (fyi: it's black), because I'm about to make a sparkly gold leopard print jumpsuit - consolation in anyone's eyes, surely? Those are not words I ever thought I'd find myself typing, but I feel oddly remorseless.

Fabric notes: The top photo is a lovely drapey viscose by Atelier Brunette, called Moonstone. The gold-car-substitute fabric in the bottom photo is a cotton jersey from Guthrie & Ghani, found here.
Email Post