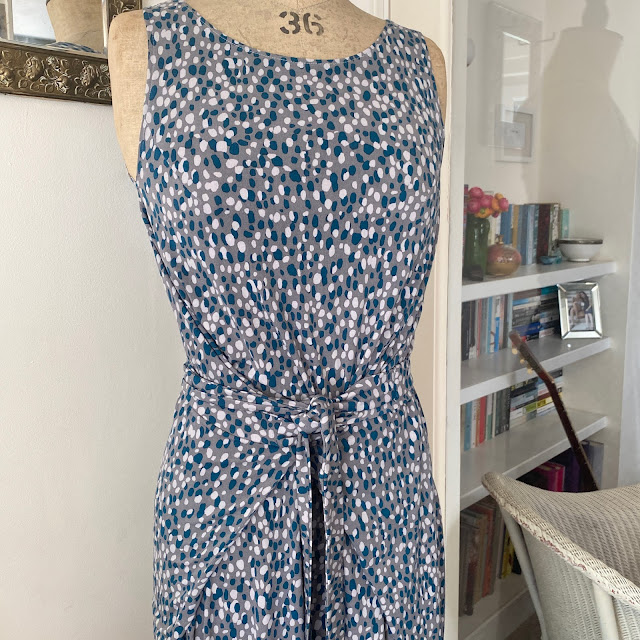 I've done a lot of undocumented dressmaking over the last two summers, and although I hadn't been intending to post about those things retrospectively, this afternoon I was discussing the merits of Named Clothing's Kielo Wrap Dress pattern with my friend Sally, and realised I didn't want to leave this particular pattern unevangelised, so here we are.

It's called a wrap dress, but it isn't the kind of wrapping that risks full thigh-exposure if the wind blows the wrong way or you need to run for a bus - quite the opposite - it's more like you're a present that's being wrapped with a double layer of fabric for extra security. The dress is a voluminous trapezoid shape (think bat wings) that you fold inwards, winding the ties around your waist as loosely or firmly as you feel inclined, or as your lunch dictates. The wings of material create something that looks both structural and flowing around the hips - it's really lovely. 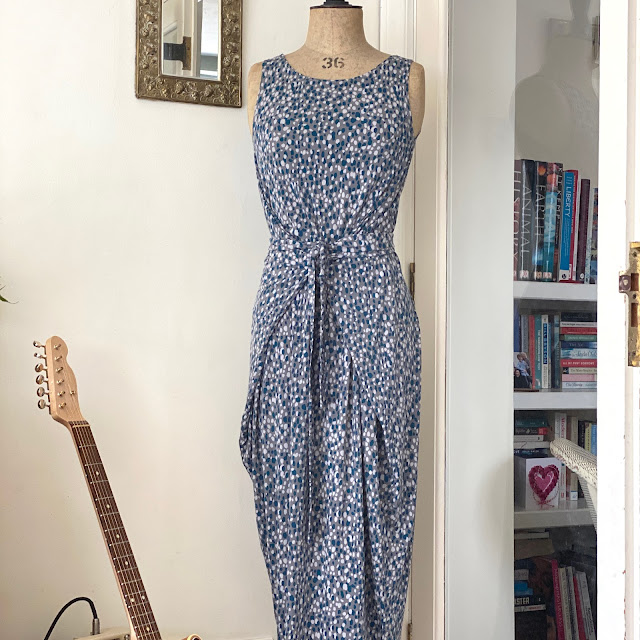 At the time I was feverishly sewing multiple Kielo dresses, Named Clothing offered a downloadable add-on sleeve pattern piece on their website and although I knew I would really love a sleeve, I also felt quite hungry for my wardrobe to bulge even more heavily with Kielos, so I didn't stop to adapt the pattern pieces to accommodate the sleeve add-on, and just shivered instead. BUT they've now brought out an updated version where it's all done for you and which also includes a jumpsuit option, so I'll re-buy it when summer nears, which would be necessary anyway, because the pattern pieces are large and cumbersome and after making several dresses from it, it's in tatters. 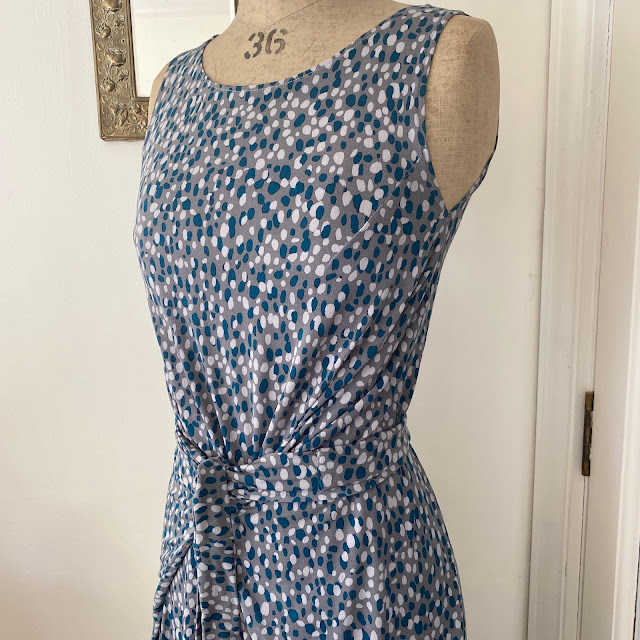 This is my favourite Kielo, although I didn't actually have quite enough fabric, so the waist ties have been pieced, which shows, but not in a way that bothers me overly on such a busy print. The fabric was bought from the remnant table at C&H fabric years ago, and is a very fine, stretchy, crepey jersey by Lady McElroy - if you're feeling no wiser for that description, it's like 60 denier tights territory: it has the potential to ladder, but probably won't.

In my head, this is my University Open Day dress, as I happened to wear it on the first few visits I made with my daughter the summer before last, and then it just became the thing I automatically reached for on subsequent open days - a long dress was such a nice thing in changeable weather - cool in the sun, but quickly made toasty with a denim jacket (in the absence of sleeves) on an overcast day.

I didn't need to make too many changes to the pattern - I shortened the waist on the paper pattern by 1", raised the armhole (really easy to do on the fly because of the way the dress is constructed, so it didn't need a toile), and I took a few (or several) inches off the hem.

The eagle-eyed might have noticed the first two photos come with a free game of Spot the Disembodied Guitar Neck included - I took these photos last July and can still remember trying to change my angle to stop them from creeping in, but they just seem to be EVERYWHERE and I was reluctant to attempt to move them after a vacuuming incident where I accidentally knocked the stand legs inwards without noticing...the guitar was left with commemorative indentations. I still feel bad about that now, so I couldn't risk moving them in the name of nicer blog photos.

The digital pattern is available from Guthrie & Ghani in the UK and you can select an option to have them print the pattern for you on A0 paper. By the way, I was first inspired to make one by seeing Kerry's versions, if you'd like to see one on a real person.

Nb. Although my measurements were the same as this mannequin, when she arrived several years ago, we realised they were spread over a 6ft frame, where I'm 5ft1. Sawing a little off her stand pole made her shorter, but did nothing to reduce her willowy torso, so this is what the dress might look like on me if I'd been stretched a little...